"They will steal our breezes." 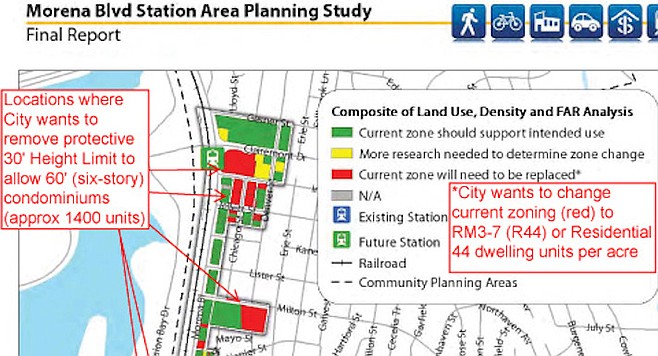 Bay Park residents raised that big red balloon high in the sky between Morena Boulevard and the I-5 Saturday to demonstrate how tall the new developments along the Morena corridor could be. 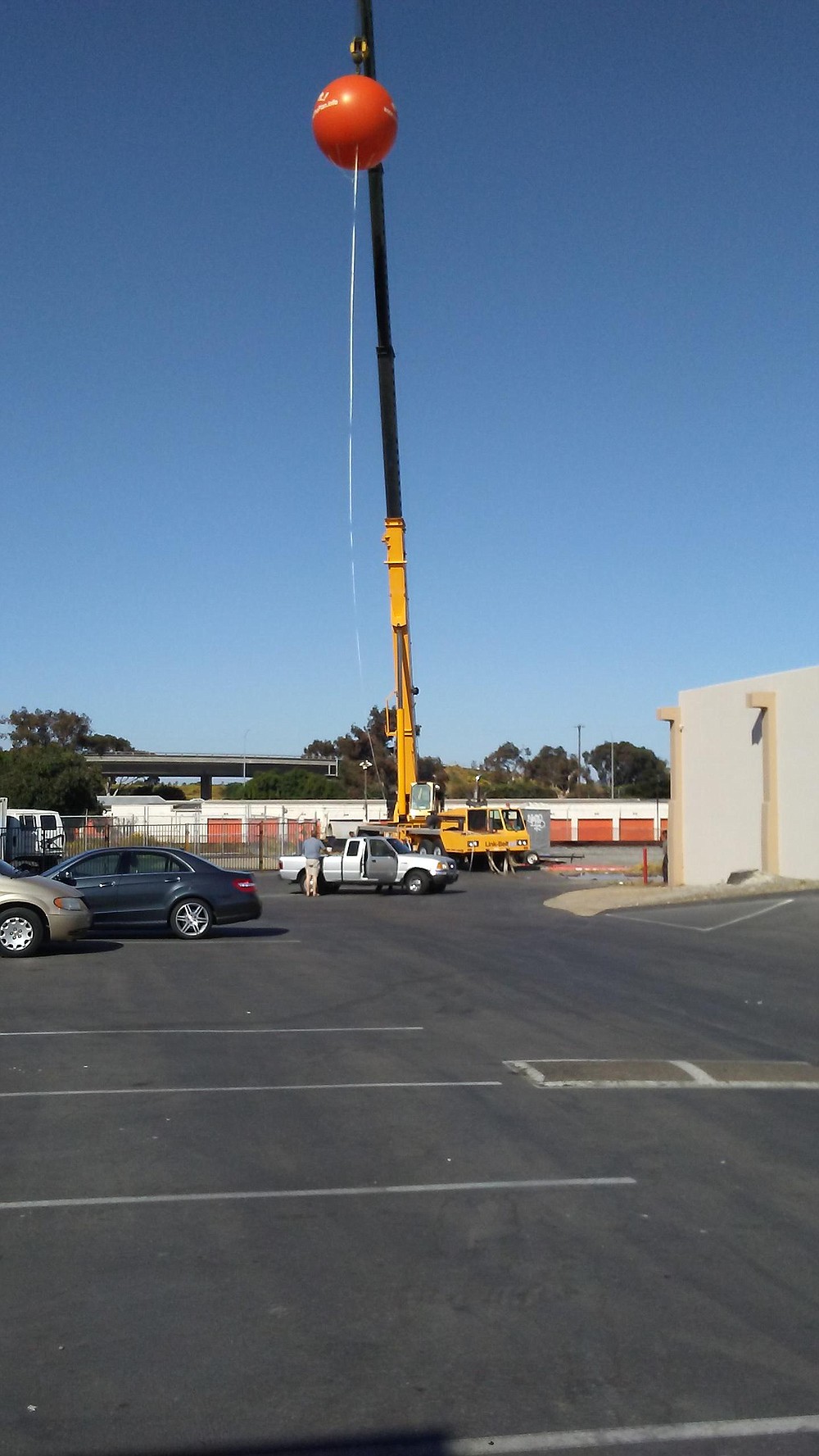 After the balloon went up, the organizers were told it was illegal to have it so close to the train tracks

"I could see it from the freeway and I thought I'd come by to see what this is," said one self-described balloon junkie. "It's that tall." The helium-filled balloon was tethered to a crane to get precisely 90 feet of altitude so that people who live at the west side and now have views to Mission Bay would get a picture of what a zoning change that would allow the tall building may cost them.

After the balloon went up — at a cost of about $700, according to Erin Cullen, the organizers were told it was illegal to have it so close to the train tracks between the freeway and the parking lot behind Jerome's Furniture warehouse. But because of construction on the trolley, no trains were running and the order to move was rescinded. 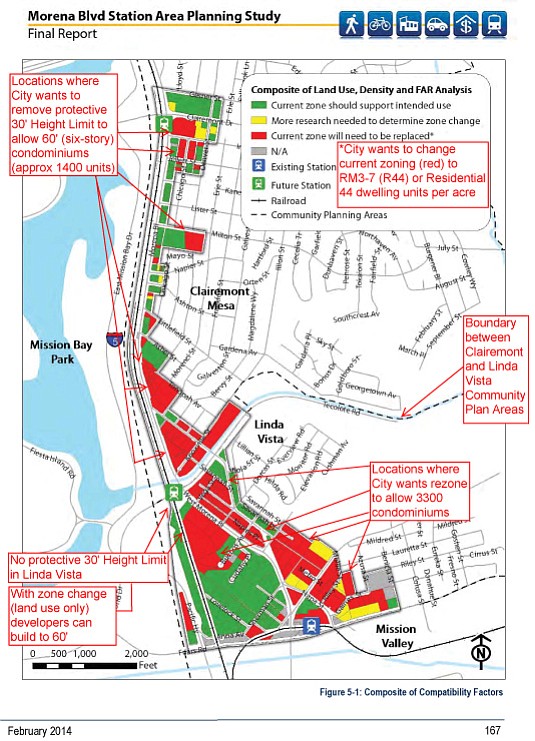 The area of warehouses and big box stores west of Morena and east of the trolley tracks, from is about to get a make-over into residential and mixed use real estate, thanks in part to the land's proximity to the new trolley line from downtown to University City.

Since the land is classified as Transit Oriented Development, developers have far more freedom to build tall. Perry Dealy, head of Dealy Development, also put in an appearance. "I think it's a good opportunity to get a visual understanding of what can be built here," Dealy said.

"It is hard to see the balloon from up on the hillside (of west Bay Park.)" Dealy would like to see the 20-acre parcel developed under a master plan, rather than building by building, and he showed plans for how he sees the project. Dealy said his plan includes starting with lower buildings at the Morena edge and stepping up height as the development gets close to the western edge.

He expects to build along the lines of the mixed-use projects so popular right now, and expects to produce about 1,700 rental apartments, along with a park for residents, he said. "It's a great opportunity to provide more housing and we want to make it a village," he said. "The University of San Diego supports this plan."

Dealy said the plans include creating three 'view corridors' for uphill residents, along Buenos Street and the two other streets that will go to the western edge of the proposed development. Cullen cautioned that the plan wasn't what is on the table — only the zoning changes that will allow for the development.

"We don't know what they will come back with once the zoning is approved," she said. "We think 45-feet tall is appropriate for the area, not 90." She noted that the zoning change being sought will allow for up to 3,300 homes along Morena from Friars Road to that she understands will be rental units — and if the rents are comparable to nearby projects, could cost $3,200 a month for a two bedroom.

"This is strictly about big money and the views they will have from the 90-foot tall building," she said. "Meanwhile, they are stealing our breezes that clean the air and the sunsets we can see from our homes."

There's no way the developers will let the city settle for density of RM3-7 or 44 dwelling units per acre if they get to lift heights to 90 feet. Same for floor area ratios, which will likely be gutted to allow 200 square foot units, as these will only be rentals and surrounded by highways and train tracks.

The main reason for our housing shortage is that new housing is being produced at the expense of existing housing, only to be consumed by outside investors rather than meet domestic demand.

The developers propose the solution of Stalinist Revival shoe-box towers not because maximum density is good for the environment (it's not), but because in areas already developed that's the easiest way to make a buck. Where it's more profitable building single family homes, it's amazing how quickly they villanize anyone opposing sprawl.

Vancouver stemmed the tide drowning their residents by taxing foreign buyers and housing left empty. If we don't get serious about making it painfully expensive for people who don't live where they own (especially AirBnBs), there will never be an offsetting market force putting a break on our housing crisis.