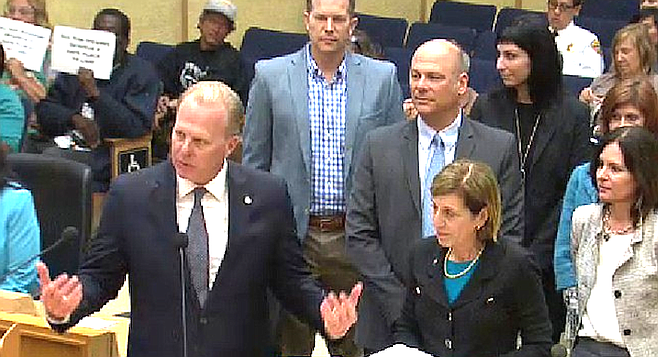 Mayor Kevin Faulconer gave a proclamation on April 24 declaring May 7 to May 13 as National Travel and Tourism Week in San Diego. Surrounded by tourism professionals, Faulconer praised them for helping to generate hundreds of million of dollars for San Diego. Councilmember Barbara Bry said last year was a record breaking year for visits to San Diego. 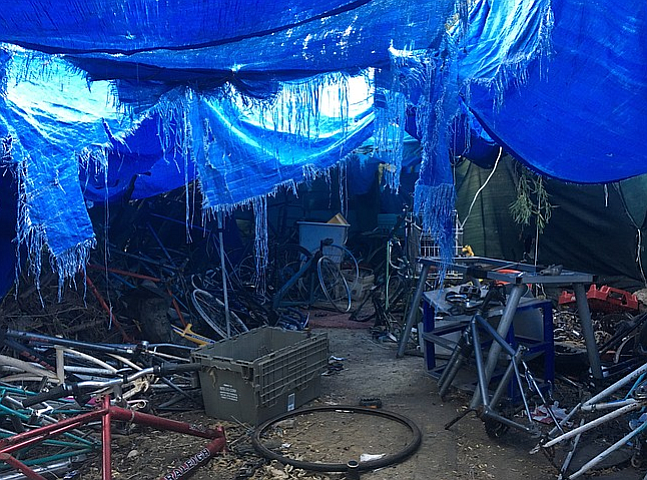 Homeless camp with hundreds of stripped down bicycles discovered along the San Diego River last week.

As Faulconer and Bry talked up tourism, several people seated nearby held up signs about homelessness. After the mayor’s proclamation, some of them spoke out about homelessness and the negative impact it’ll have on tourism if the mayor doesn’t get a handle on it.

Tony Young is a former city council president that has served for five years on the San Diego Tourism Authority board and for six on the county Regional Airport Authority board. 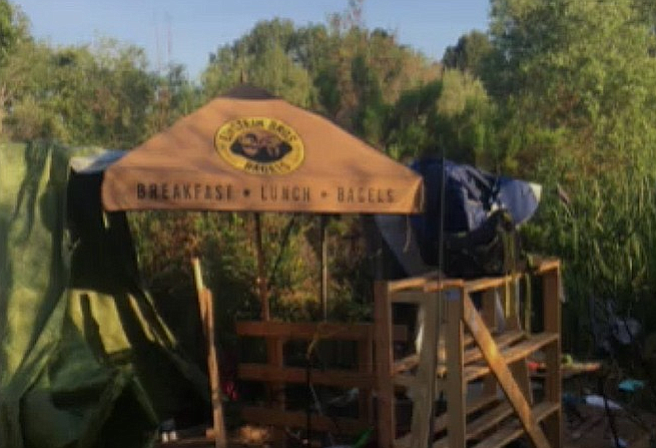 Young didn’t attend the mayor’s proclamation but had this to say about those juxtaposing homelessness and tourism. “That’s not the way we should be addressing it in the first place. It should be addressed via a human point. It doesn’t reflect our values to address homelessness because it might make tourists uncomfortable.”

Sherman said other cities have been sued over water quality because of homeless camps like this.

A city council committee voted on April 20 to budget approximately $40 million to promote tourism in FY 2018. The tourism budget is derived from hotel taxes collected monthly from properties that rent to tourists. 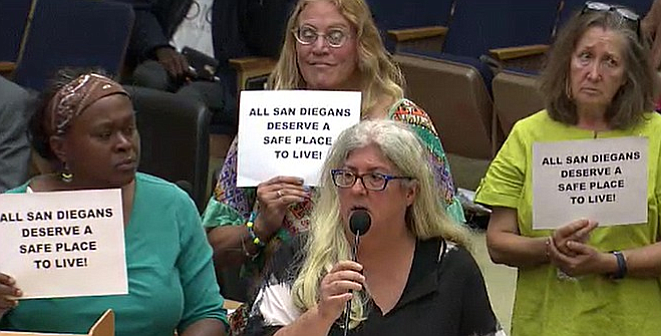 Martha Sullivan spoke again at the tail-end of the meeting, mostly to chastise Sherman about his slideshow.

Young said the mayor and city council get to decide how the funds are distributed. For the most part, it goes to two places: marketing and the arts. The former to get tourists to visit San Diego and the latter to help make San Diego more attractive to tourists. The Arts and Culture commission gets a chunk of the budget to dole out to local arts like the San Diego Symphony and local events like Comic Con.

Before the mayor’s proclamation, Councilmember Scott Sherman kicked off the meeting by showing a slideshow of a large homeless camp with hundreds of stripped down bicycles that had been discovered along the San Diego River last week. Sherman described felons making a run for it, stolen Einstein Bagel umbrellas, and abandoned pit bulls. He said other cities have been sued over water quality because of homeless camps like this.

Martha Sullivan from Women Occupy San Diego, surrounded by four others holding up signs about homelessness, addressed the council. One of her gripes was that the mayor was celebrating a record year for tourism just days after the bleak homeless numbers were released.

Another point of contention was the doubling of homeless tents in the last year coupled with a possible crackdown on them. Sullivan called for the mayor to instead use the same Qualcomm Emergency Shelter Plan for the homeless crisis that Mayor Jerry Sanders used to help those displaced by the 2007 wildfires.

Standing beside Sullivan, Diane Davis from the Voices of Our City Choir, sang for the city council.

Faulconer has upped the ante for homeless services since he took office. The FY 2018 proposed budget for homeless services is $3.4 million. Though homeless advocate Michael McConnell said the San Diego Housing Commission does a lot of the heavy lifting, their FY 2018 budget of $433 million has $69.8 million slated to help the homeless.

Sullivan spoke again at the tail-end of the meeting, mostly to chastise Sherman about his slideshow - for giving the impression that homeless people are dominated by “ne'er-do-wells.”

Faulconer has budgeted $5 million for a special election this November to hike hotel taxes. The increase is expected to help the homeless, repair roads, and foot the bill for the convention center expansion.

Considering the city’s previous legal challenges over hotel taxes, there’s likely to be some grumblings from some hoteliers.

"For the most part, it goes to two places: marketing and the arts. The former to get tourists to visit San Diego and the latter to help make San Diego more attractive to tourists."

There in a nutshell is everything wrong with our civic misleaders. Our city government is nothing more than a mechanism for selling off and selling out those who live here. If you're a developer or a tourist or other outsider, we'll pay you to do what you would be doing anyway, with tax money that is desperately needed for social services and infrastructure.

Anyone who looks at support for the arts as a tool for luring rather than an intrinsic good to enhance the quality of life for residents is unfit to hold public office.

Well said Cassander! Talk about fiddling while Rome burns! Really, they haven't got a clue!