Cygnet puts the loco in locomotive 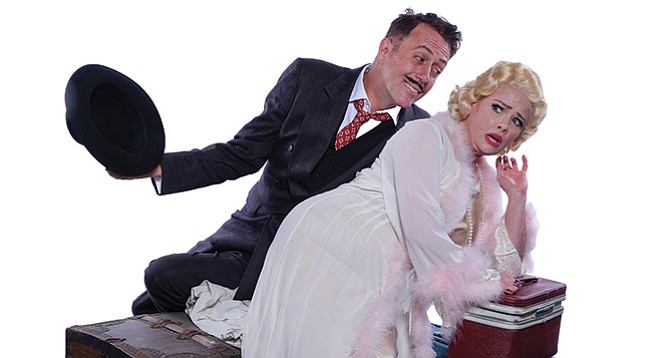 Theatrical wizard David Belasco (1853–1931) was a major link between 19th- and 20th-century theater. Instead of deep-fried, scenery-chomping acting, he demanded a more naturalistic style and detailed sets famous for their “tidiness.” He banished footlights and discovered many a future star, including Barbara Stanwyck (and made her change her name). Whether producing or directing, his name alone had box office value.

The “imperious impresario” was also 19 kinds of megalomaniac. “Tyrant” just describes his knuckles. He detested broad acting but, in person, was larger than melodrama. Belasco was so egocentric, so domineering, that Charles Bruce Milholland, Belasco’s press secretary in 1930, wrote Napoleon of Broadway about him. In 1930, they took a train ride from Chicago to New York on the famous Twentieth Century Limited. Evidently Belasco didn’t enjoy being cooped up, even on a train so luxurious they called it the “Eighth Wonder of the World.” For 18-plus hours he ranted and raved.

No theater would touch Milholland’s script — one needn’t wonder why, Belasco being such a powerhouse, even in his grave. Napoleon became one of American theater’s most famous unproduced plays.

Oscar Jaffe, protagonist of On the 20th Century, is based on Belasco. Once a mega-producer/director on Broadway, Jaffe’s last four shows tanked at the box office. His most recent got cancelled at intermission — on opening night. He owes $250,000. He can’t pay his cast or even his loyal “musketeers”: press agent Owen O’Malley and business manager Olive Webb. They board the Twentieth Century Limited in Chicago. He has the trip to New York to write a play that will bust the block. He must finance it and, to guarantee copious ticket sales, must re-woo Oscar-winning actor and ex-lover Lily Garland. Word has it, however, that if she sees him again, Lily will resort to indelicate verbiage, not to mention vigorous eye-gouging.

That’s the set-up. Add to it a Congressman caught in flagrante, tap-dancing porters, and a religious fanatic plastering the walls with red stick-on’s that read, “REPENT, for the time is at hand.” Turns out she’s Mrs. Letitia Primrose, who is either the zillionaire head of a patent medicine company — and a theatrical producer’s dream donor — or just stark raving nuts.

One of the musical’s many inner connections: it may not be the end of the world, as the stick-ons proclaim, but it’s certainly the end of Oscar Jaffee if he pulls in to Grand Central Station without reaching his goals.

On the 20th Century is as goofy as Mrs. Primrose. But that’s its charm. Its allergic to profundity, could care less about moral gravitas. The closer the train comes to New York, the more the show speeds up and farce reigns.

What feels odd, at first, but makes more and more sense: Cy Coleman didn’t write a zippy Jazz Age score with staccato syncopations. Instead, the characters sing operetta-tinged numbers. As when — best of show — Oscar and Lily duet the beautiful “Our Private World” and add an oasis of elegance to the shenanigans.

Sean Murray (Oscar) and Eileen Bowman (Lily) may have been as good, but rarely better. Murray’s bold choices and excellent vocals command the stage. And Bowman’s his match, doing brisk licks on the one hand, and high-wire vocals on the other, often within seconds of each other.

Bowman’s entrance is for the ages. In a flashback, Oscar’s auditioning a singer. Mildred Plotka — the future Lily Garland — plays piano. She’s dressed as frumpy-brown as Mama Rose in Gypsy (Jeanne Reith’s expert costumes combine period with personality). With Oscar-like audacity she criticizes the singer. Then demonstrates the correct way with soprano leaps like moonshots.

On the 20th Century has slow spots and lumpy passages — Comden and Green were much better at lyrics than plot — but Murray and Bowman make Cygnet’s show a must-see.

The three sisters may never make it to Moscow. Somehow Oscar, Lily, and their chastened menagerie make it to New York. The musical shuffles loose ends together — well, most of them. But the ending’s so fragile it begs for a sequel: In the Big Apple: The Further Adventures of Oscar and Lily. Hold it: that could be the show Oscar failed to write along the way!

On the 20th Century, book and lyrics by Betty Comden and Adolph Green, music by Cy Coleman

Playing through April 30; Wednesday and Thursday at 7:30 p.m. Friday and Saturday at 8 p.m. Sunday at 7 p.m. Matinee Sunday at 2 p.m. cygnettheatre.com