Chesterfield Drive your only way to the beach 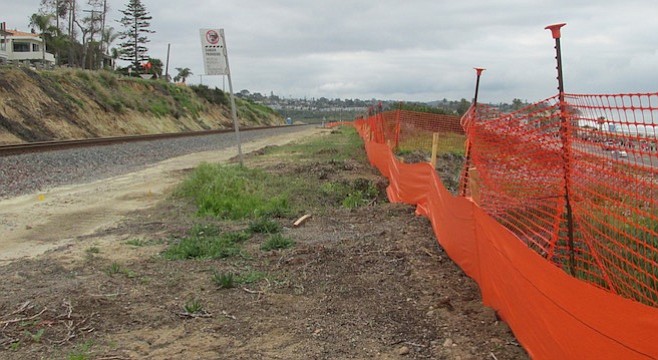 Orange is the new color seen around Cardiff-by-the-Sea as the North County Transit District and Caltrans have blanketed the town with miles of orange construction fencing. 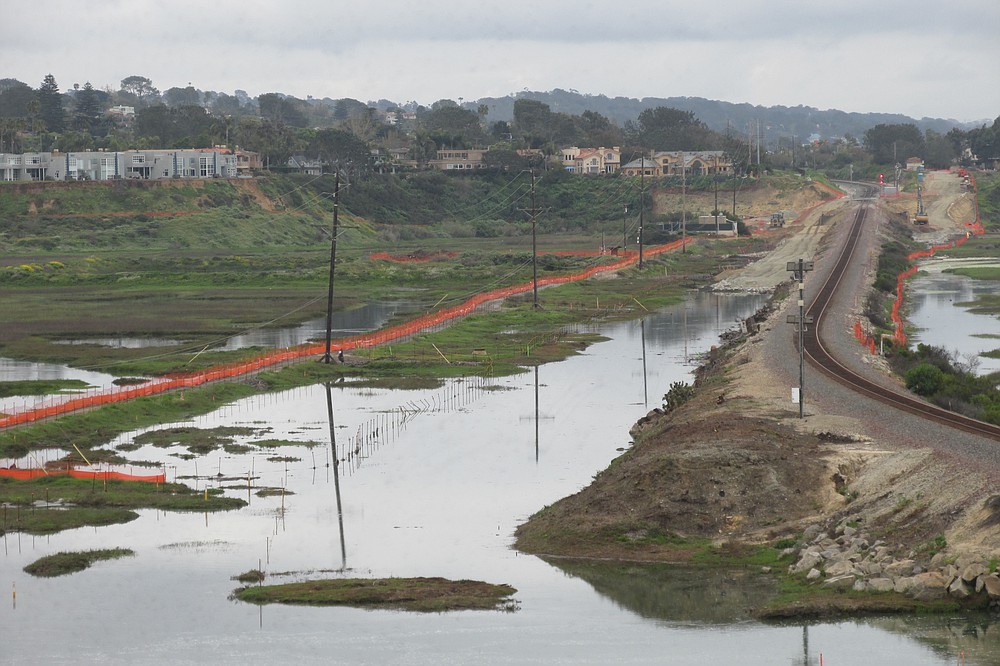 By 2030, expect 27 miles of freeway improvements and new car pool lanes, along with integration of access to trains, bike lanes, and pedestrian and bridge crossings.

Most of Cardiff’s four miles of train track right-of-way has been bordered by the orange fencing. It’s the beginning of a project that will add a double track, replace aging bridges, and improve grade separation and crossings along America’s second busiest rail corridor. Eventually the project, from San Luis Obispo to San Diego, will allow doubling of Amtrak, commuter, and freight traffic — up to 100 trains per day, over the next 20 years.

Crossing the train tracks at any place other than at a street grade crossing has always been illegal, and enforcement of “trespassers” has been stepped up by the sheriff’s department. However, now the orange fencing forces Cardiff residents and surfers to use only the Chesterfield Drive grade crossing at San Elijo Avenue to get across to Coast Highway 101 — to the surf spots and beaches. 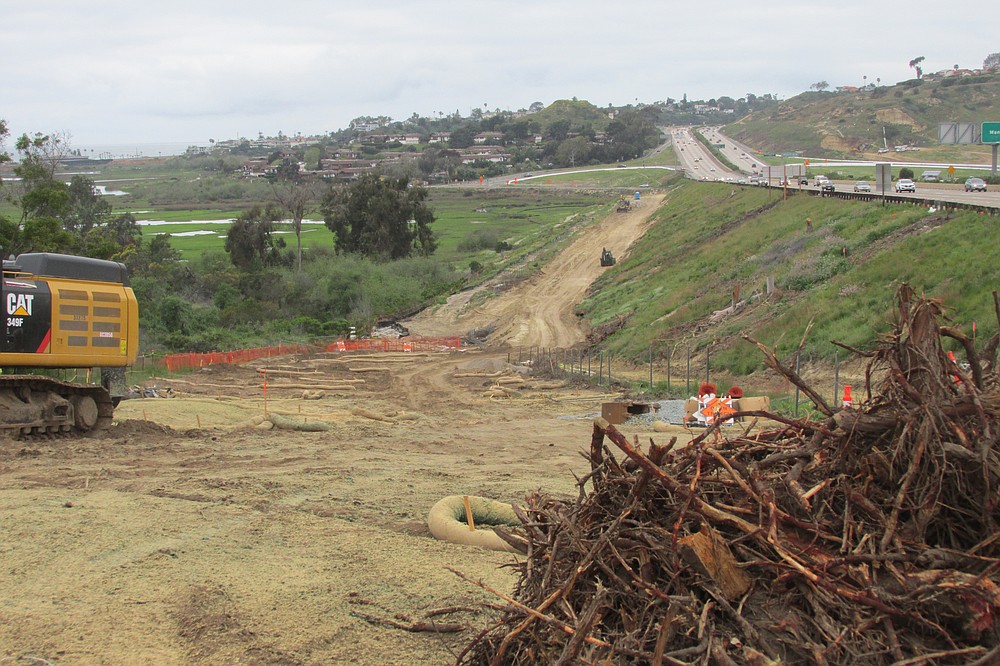 Construction on the Manchester Avenue interchange will add four lanes in each direction.

Locals have expressed shock over the amount of grading that has taken place next to the tracks in the sensitive San Elijo Lagoon Preserve. But not to worry, says Doug Gibson, executive director of the San Elijo Lagoon Conservancy. He told me that while some habitat is currently being harmed; the agencies involved are spending $70–90 million for lagoon restoration.

“It will increase velocity of water, open it up and make it more natural, and allow us to remove old infrastructure like creosoted pilings,” said Gibson. He also pointed out that the I-5 widening project at Manchester Avenue will double the length of over-the-water freeway bridge, allowing for increased wetlands and more water flow.

Unfortunately, motorists and travelers are already noticing the construction’s impact.

For several weekends, due to rail construction in Cardiff, bridge replacement in Sorrento Valley, and platform improvement at the depot in Oceanside, weekend trains have been shuttered between Oceanside and San Diego, including a 48-hour period on March 25-27. Amtrak provided bus service between the two stations. Northbound riders were advised that connecting with Amtrak trains further north might be delayed.

There is no alternative transportation to its Coaster riders during the closures, other than to use the Amtrak scheduled shuttle bus service. A $13 one-way fare from downtown San Diego to the Encinitas station on Amtrak, sold through the transit district ticket kiosk, would cost only $2.50.

Concurrently, construction began on the Manchester Avenue interchange, part of the massive expansion of 27 miles of I-5’s North Coast Corridor, which will add four lanes in each direction, from La Jolla Village Drive to Harbor Drive in Oceanside.

A large swatch of grading and brush removal has occurred for bridge widening on the lagoon’s overpass west of I-5. And grading has begun on the former farm on the east side at the Manchester Avenue exit for a future Park N Ride. The lot will also serve as parking for the lagoon’s visitor center on the west side of I-5, which has very little parking. Pedestrian walkways and bike lanes along the lagoon shoreline will connect the two.

Caltrans previously announced to the media that on March 26, I-5 at the San Elijo Lagoon Bridge would be intermittently closed from 6:00 a.m. to 10:00 a.m. Signs recently went up announcing the temporary closure of the northbound I-5 Manchester Avenue off-ramp beginning in August, through the end of the year.

Caltrans and associated agencies stated that the massive projects would create “a balanced transportation system to provide travelers with choices for the future while enhancing the quality of life for residents.” The complete 27 miles freeway improvements and new car pool lanes, along with integration of access to trains, bike lanes, and pedestrian and bridge crossings, won’t be fully completed until 2030.

The road to chaos is paved with improvements.