The spirit of Belgian Lion lives on in granddaughters 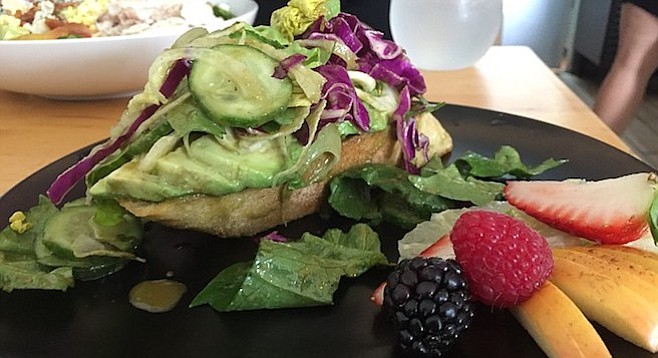 The Little Lion Café inhabits a tiny building at the edge of Sunset Cliffs Boulevard, right at the point where the long straight street becomes a winding road that hugs the coastline. The Little Lion Café is owned and operated by three granddaughters of Don and Arlene Coulon, former owners of the Belgian Lion in Ocean Beach. Anne-Marie is chef; Jacqueline, beverage director and front of the house; and Dominique (marketing and branding). Their motto: Food is love, love is family.

A friend who lives in the area hosted a group dinner there a few months ago. I remembered enjoying every bite, but it was one dish in particular that I was eager to have David try — the Flash Fried Cauliflower with capers, jalapeño, and lemon sumac yogurt. 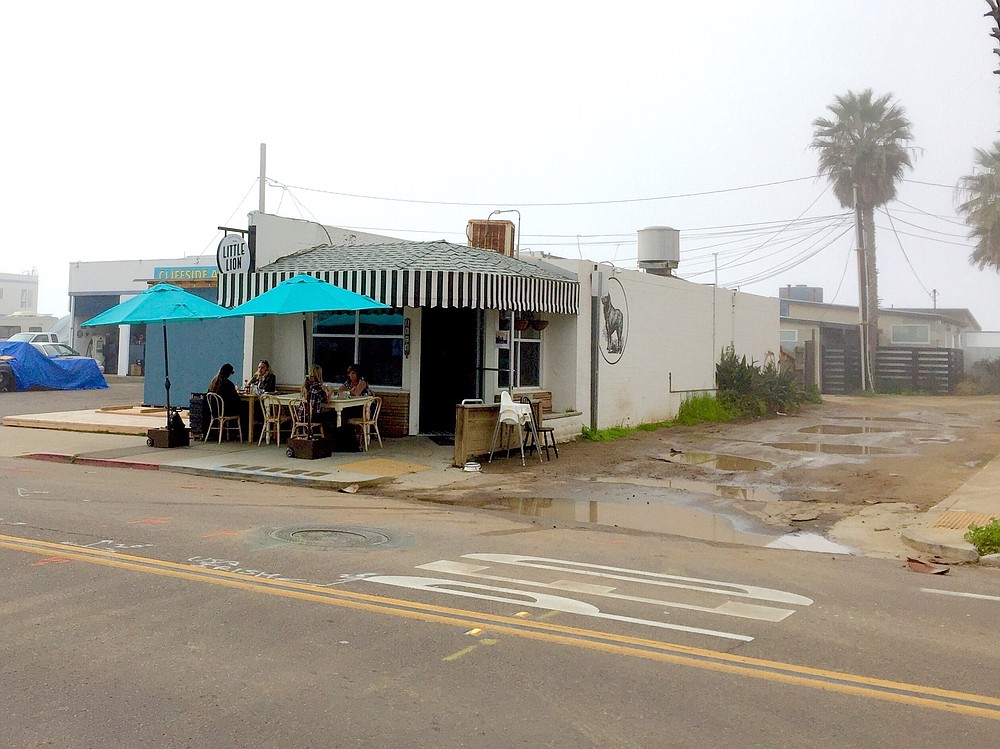 The Belgian Lion once stood here.

When I finally brought David back with me, it was a foggy Wednesday afternoon with a marine layer was so thick we couldn’t see the ocean. The cauliflower wasn’t on the day menu, but the silver lining around this cloudy day was an entire new set of options to explore, including brunch (the day menu is in effect from 8 a.m. to 3 p.m.). The drink choices were extensive, from elaborate smoothies (e.g., Chocolate Hemp, with hemp milk, agave, vanilla, cocoa, peanut butter, banana) to mimosas to house-made “tonics and elixirs.” I opted for a bottle of Lorina Sparkling Lemonade ($4). 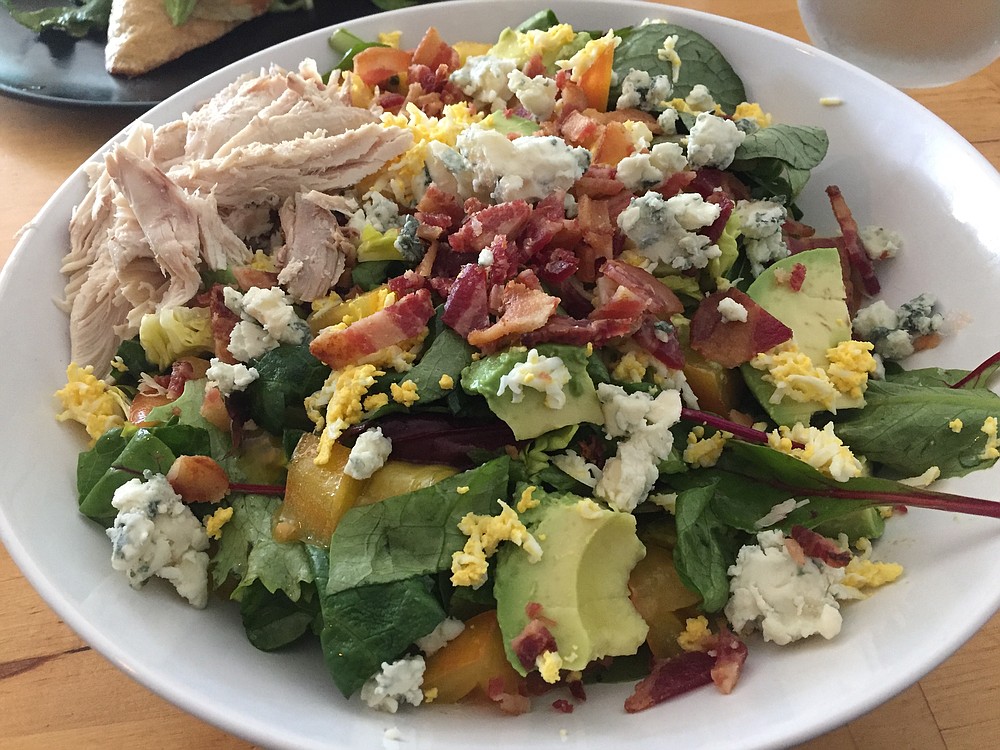 The Classic Cobb could have been better

We ordered the Local Avocado Toast ($9), figuring it as an appetizer, but what arrived could have stood alone as an entrée. A long slice of La Brea Baguette was buried beneath the avocado and a salad of shaved vegetables and herbs tossed in Green Goddess dressing, all of which was accompanied by a medley of seasonal fruit. The vegetable mixture was a toothsome salad, and the tartness of the dressing contrasted nicely with the rich, creamy avocado. 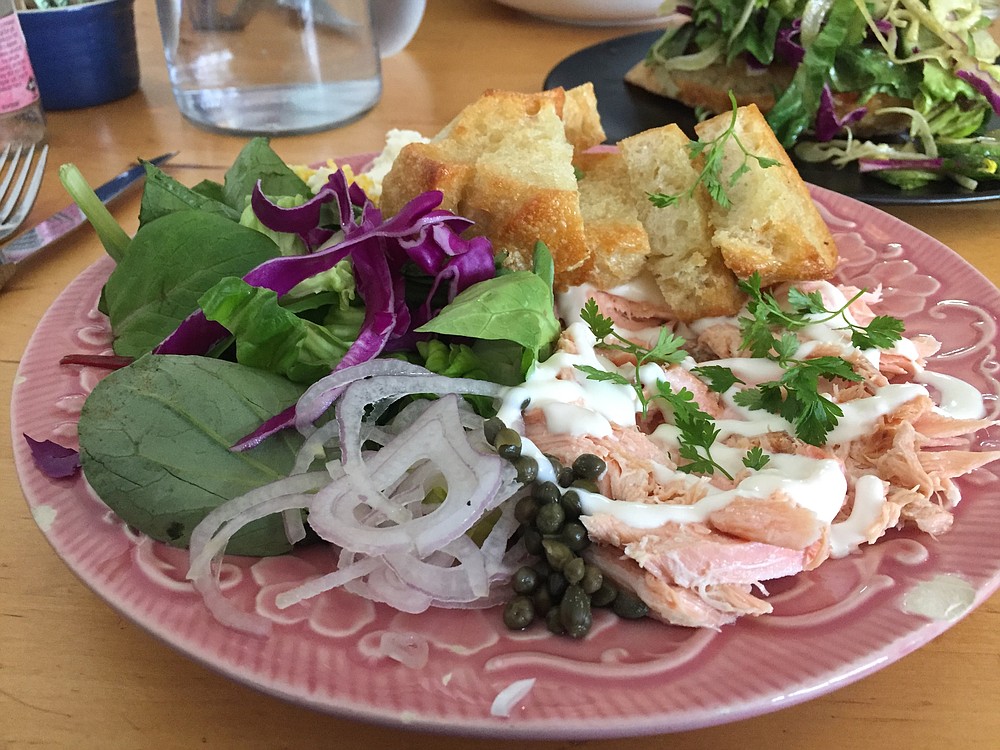 I ordered the Classic Cobb Salad ($13) with mixed greens, poached chicken, bacon, gorgonzola, egg, tomato, avocado, and champagne vinaigrette. I’ve been on a cobb salad kick lately, so I couldn’t help but compare this version to my recent favorite at Kensington Café. I lamented the lack of a creamy rich dressing such as ranch or blue cheese, as I’ve come to associate that as part of a “classic cobb.” The champagne vinaigrette was too tart for the bacon and avocado and seemed to clash rather than compliment the gorgonzola. The upside to this dish was the generosity of fresh garden ingredients, which I ended up enjoying without the dressing.

David gushed over the House-Smoked Salmon Plate ($14). The presentation was a designer’s delight, and the accoutrements were above and beyond: shaved onion, capers, créme fraiche, herbed farmers cheese, sieved egg, and toasted La Brea baguette. The salmon was not too heavily smoked, wasn’t overcooked, and had a fresh, clean flavor. It reminded him of the typical bagel and lox show but with an inventive decision to use cooked salmon filet in place of lox. If there is one improvement to be made, David says it would be to add more sieved egg, which he enjoyed, though there was only a bite of it.

I still want to bring him back at night to try that cauliflower. Based on this meal, David says he can’t wait.