Try something with the word “creole” in it 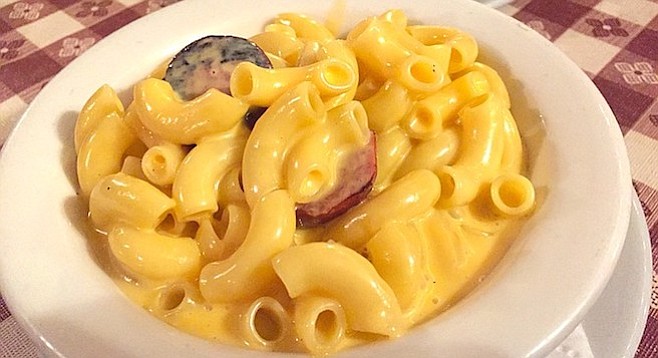 Between the quality shows at Cygnet Theatre and the lighthearted comedy of Old Town Improv, I’ve been finding more reasons to spend time in Old Town, an area that, along with the Gaslamp, I once dismissed as a destination more for tourists than locals.

On a recent Friday night, my husband David and I were looking for a place to grab dinner before catching an improv show, but we weren’t interested in any of the myriad Mexican joints.

David called up a map of the area and announced that there was a restaurant called New Orleans Creole Cafe right in the heart of Old Town. We raised our brows at each other in surprise, but I can’t say why — it’s not like Old Town has only Mexican restaurants. Right around the corner was Harney Sushi, and across the street was O’Hungry’s, which features standard American fare. 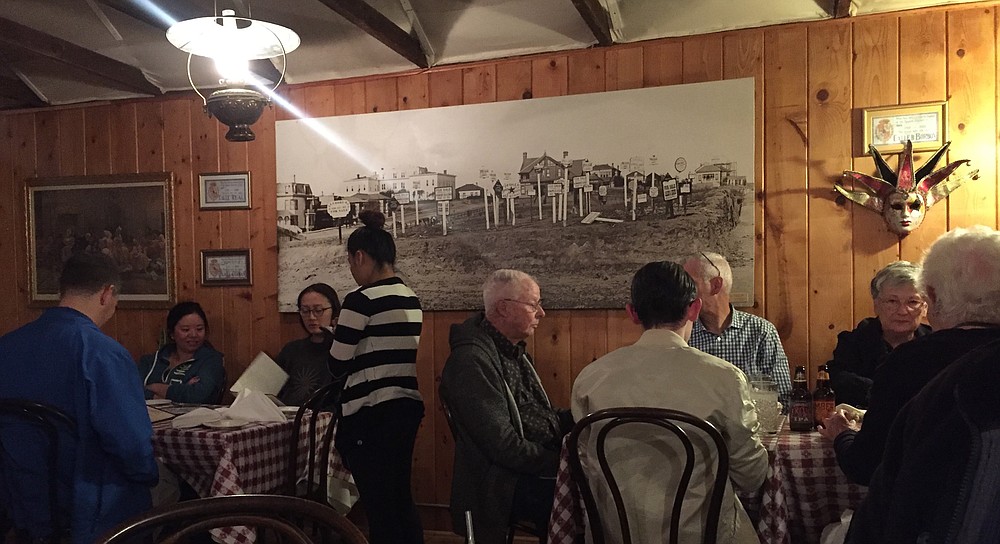 The intimacy of the cabin encourages inter-table conversation.

I think perhaps we were baffled at how there could be a New Orleans-themed restaurant in town that David didn’t already know about. For many years in a row, visiting New Orleans was how we celebrated David’s birthday, as he is quite fond of the cuisine there. 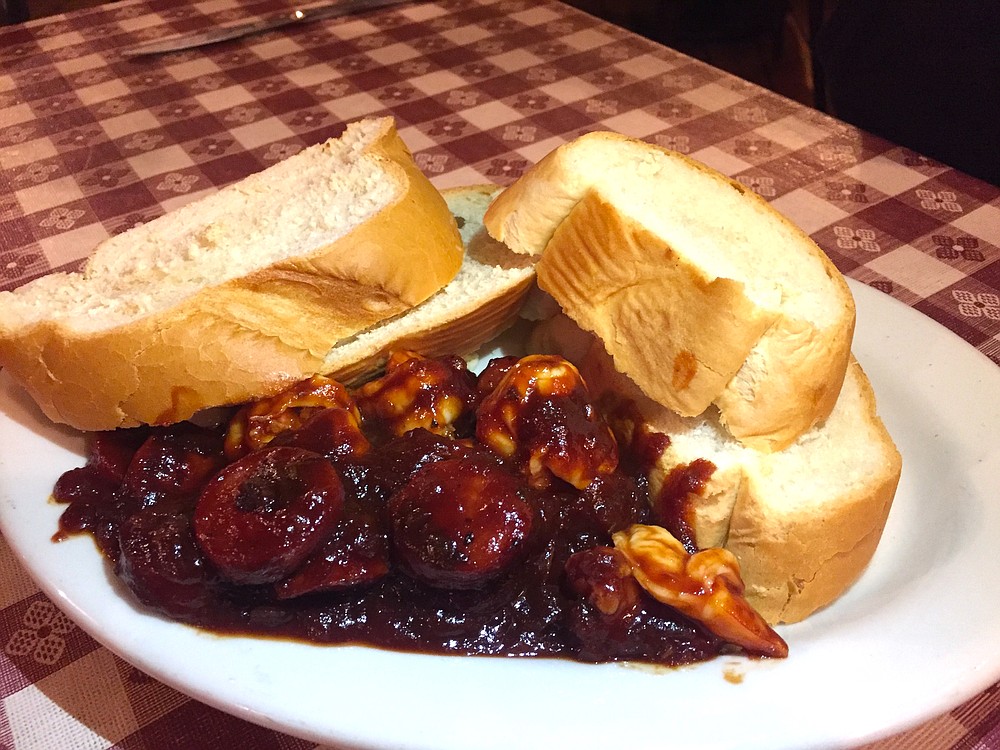 New Orleans Creole Cafe is tucked behind and to the right of the Whaley House Museum. Unlike the storefronts lining the sidewalk (reminiscent of the stark dusty roads lined with no-frills facades), outside the restaurant feels more Old South than Old West — there’s a brick patio that overlooks the Whaley House’s yard, with lush grass and looming pepper trees that were planted in the 1870s. All around, little white lights dangle like blossoms. 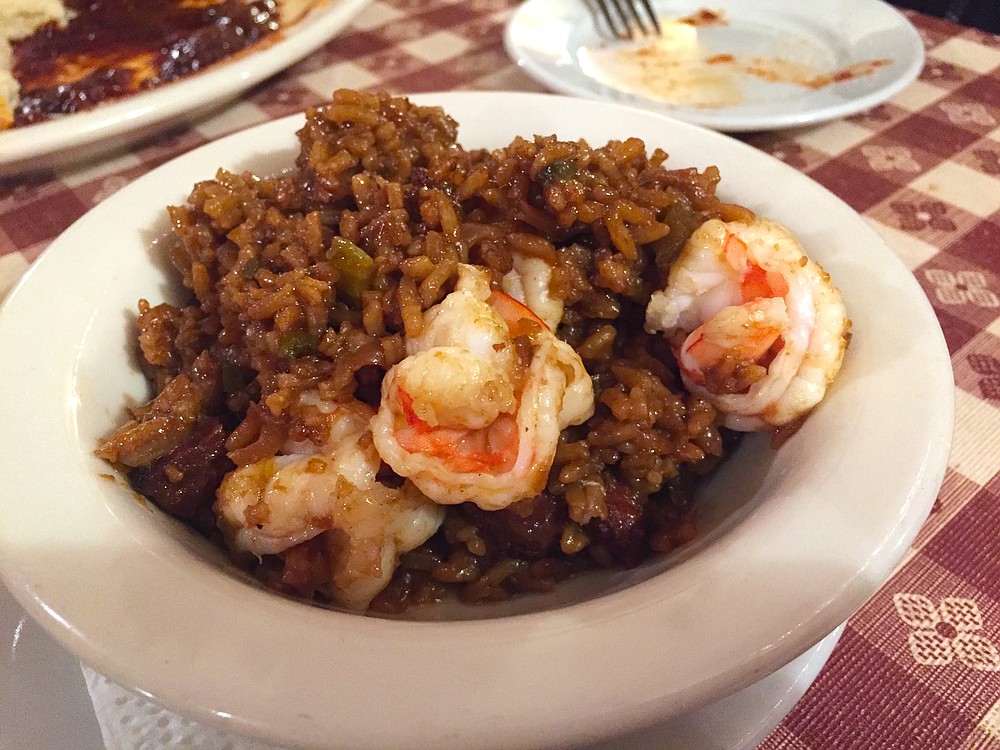 The petite version of the Dark Jambalaya

It was a chilly evening, so we opted to sit inside. The dining room is a small wood cabin with seats for just over 20 guests (David suggested it would be a cool venue for a private party). The room has three solid walls and the one containing the doorway, which is the only way in or out, and it’s how the servers come and go to and from the kitchen in the adjacent building. Against the wall opposite the doorway was a wooden cabinet filled with dishes and bedecked in Mardis Gras–colored tinsel and themed masks. On the walls to our right and left were historical photographs of Old Town.

When we walked in, there were no employees, just a friendly couple seated at one of five tables who insisted that we grab our own seat. The intimacy of the cabin encourages inter-table conversation, and while we waited for someone official to appear we learned the couple was visiting from east Texas, bordering Louisiana. The restaurant was recommended to them by an employee of the hotel at which they were staying. They were eager to judge the authenticity of the gumbo. 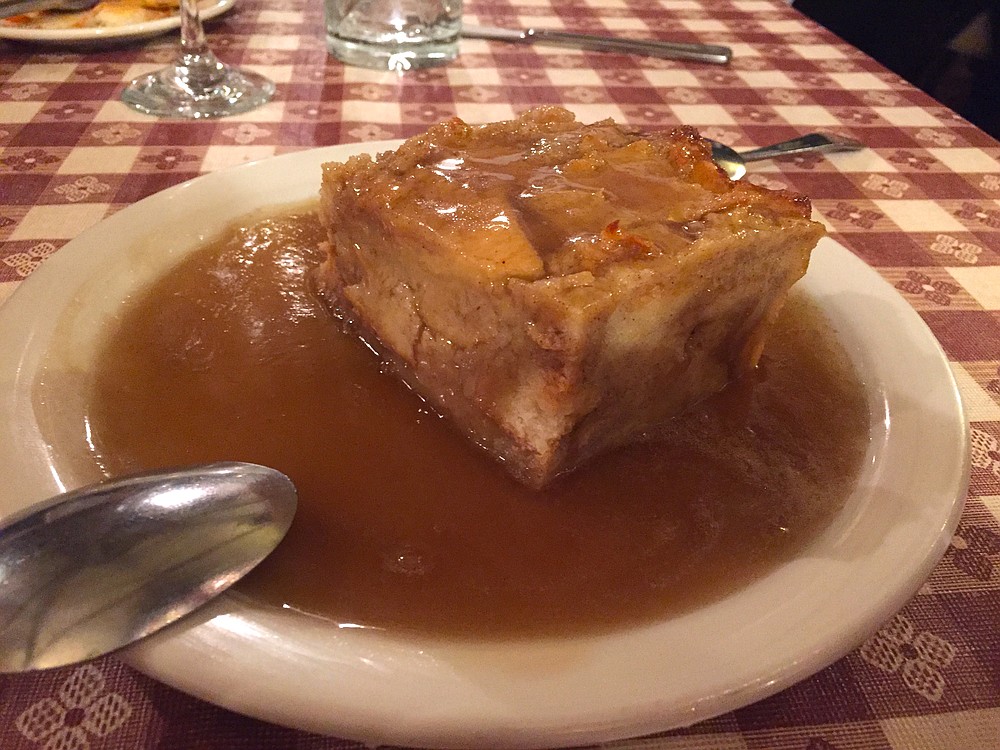 Bread Pudding with Whiskey Sauce, a perfectly salty, sugary, warm note on which to end the evening.

The servers were friendly and seemed bemused to discover us sitting inside (there must be an entrance we missed). While reading the menu, David lamented there were so many different dishes he wanted to try, but then there on the back was “Le Petit Menu.” Smaller, cheaper portions meant that we could taste around a bit. We ordered four small dishes, so the prices below reflect the smaller portions.

Though David still prefers the thinner-sauced BBQ Shrimp at Mr. B’s in New Orleans, his favorite item this night (and my second favorite) was the BBQ Shrimp with Rice ($12.50). The shrimp was heavily sauced, with a thick spicy-sweet sauce that was more sweet than spicy. Evens so, by the third bite, when the mild heat begins to catch up, it became even more mouthwatering.

My favorite was the Macaroni and Cheese with Andouille sausage ($8). The Texan couple had warned me against ordering this dish. The woman said, “Why would you go to a Creole restaurant and order mac and cheese?” Can’t tell you, lady. I guess I had a hankering for comfort, and I was curious.

I wasn’t into the sausage, so David ate those bits. But the macaroni was perfect, not overcooked or undercooked, and the cheese was so silky and creamy I could sip it like soup; it was packed with buttery, brothy flavor but magically lacked any sense of grease or oil.

I only had a small bite of the Dark Jambalaya with Beef Sausage ($8.75). Partly because I’m not into jambalaya, but mostly because I was, from that point, only interested in my mac-n-cheese dish, to which I’d since added a few dashes of hot sauce and a dollop of the BBQ sauce from the shrimp for even more layers of flavor. As jambalayas go, David said this one was a little blander than he might have preferred, but he enjoyed it fine enough after adding some salt.

Of course we had to try something with the word “creole” in it, so the fourth dish was the Chicken Creole ($12.50). The sauce was bright and tomato-y, with no discernible pepper kick. It featured the classic creole trinity of onion, celery, and green pepper, all stewed together with the diced tomatoes and whatever herbs the chef prefers (usually at least a bay leaf and garlic, and of course a few kinds of pepper, including cayenne). This probably would have been a better dish to start with, because after I’d blasted my taste buds with that rich, deep BBQ sauce and the cheese, it seemed almost one-dimensional.

We didn’t get more than a few bites into the one dessert the restaurant offers, Bread Pudding with Whiskey Sauce ($5), but it was worth it. We were shocked at how huge the portion was. Meanwhile, across the restaurant, which had since filled up with two large parties and one other couple (with more people, mostly families, out on the patio), the East Texans were nodding approvingly. The man even held up his empty plate, where gumbo had once been, and mentioned he’d sopped up every bit of it with the bread.