Salmon and sourdough for breakfast 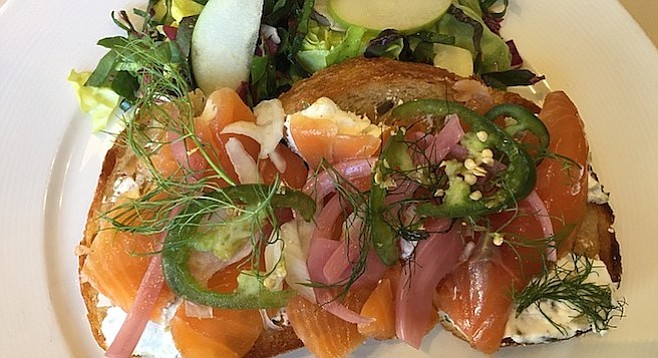 The sign for Royal Stone Bistro, a Bankers Hill eatery on First Avenue, says “Seasonal. Savory. Sincere.” That’s an apt description of the brunch we had.

I never thought of myself as a brunch person, but my wife and I have been spending Saturday mornings for the past few months sampling brunch spots while our kids are rehearsing for a play. Friends of mine who live in the Bankers Hill area recommended the spot because it was cute, cozy, and has a decent brunch menu. 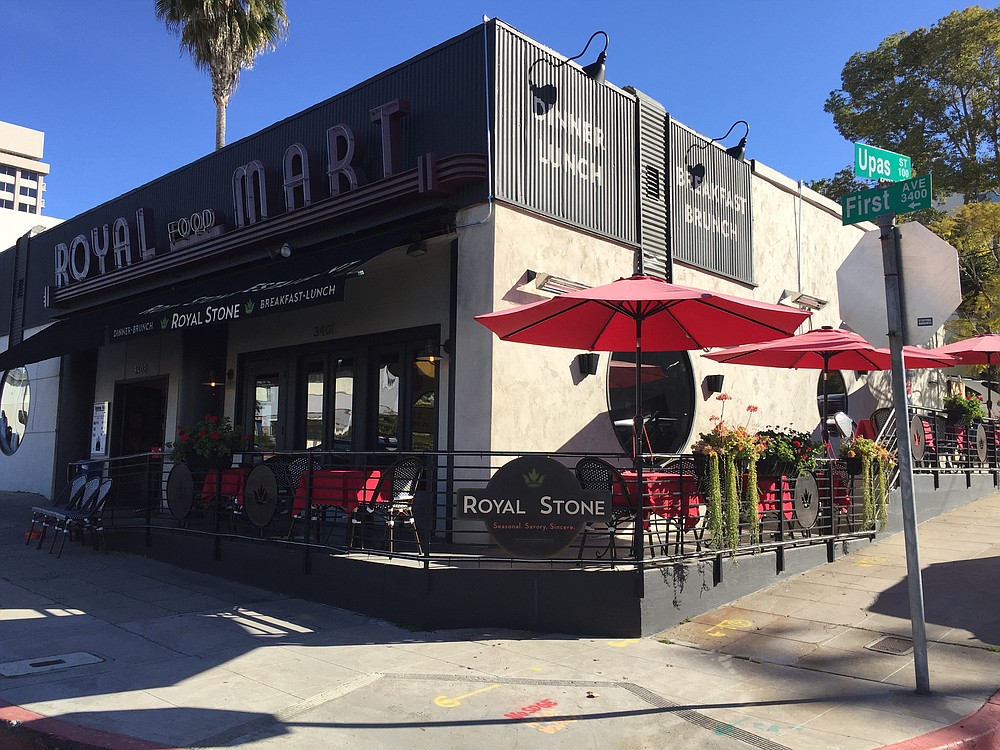 Royal Stone pops out from all the residences

So off we went. Most of the action in Bankers Hill happens on Fifth, so Royal Stone sort of pops out from all the residences, apartments, and granny flats on First. The food pops as well. We couldn’t decide what to get, so we decided to go large. 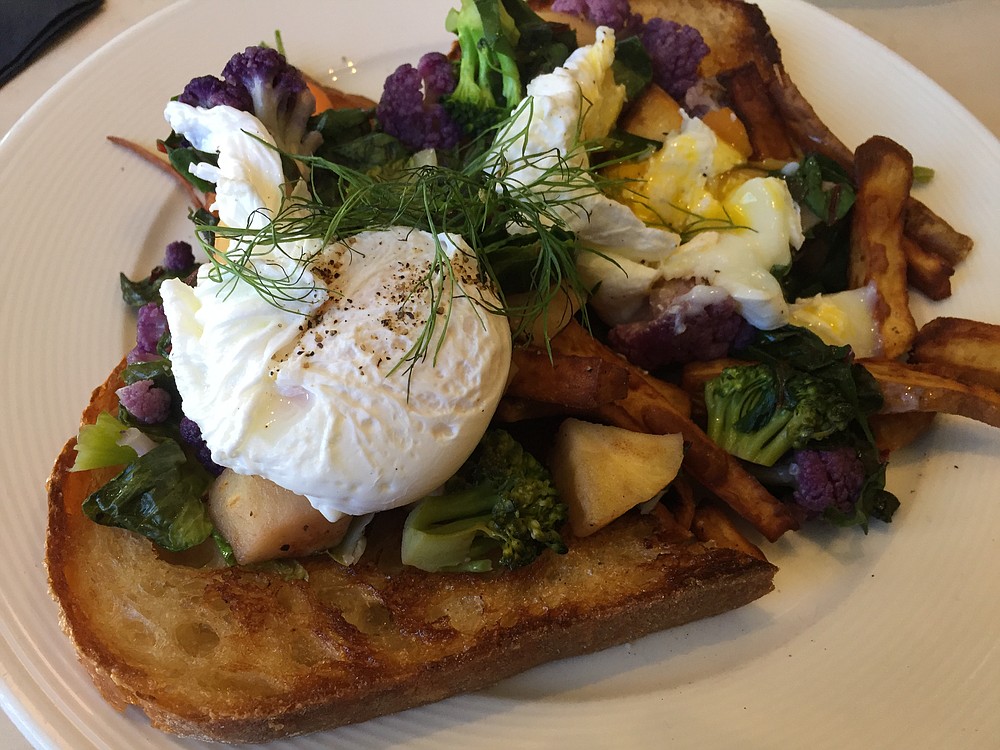 My wanted to start out with something sweet, so she got the Silver Dollar Pancakes ($5): small pancakes served with powdered sugar and syrup. She said they were fluffy and a good start. 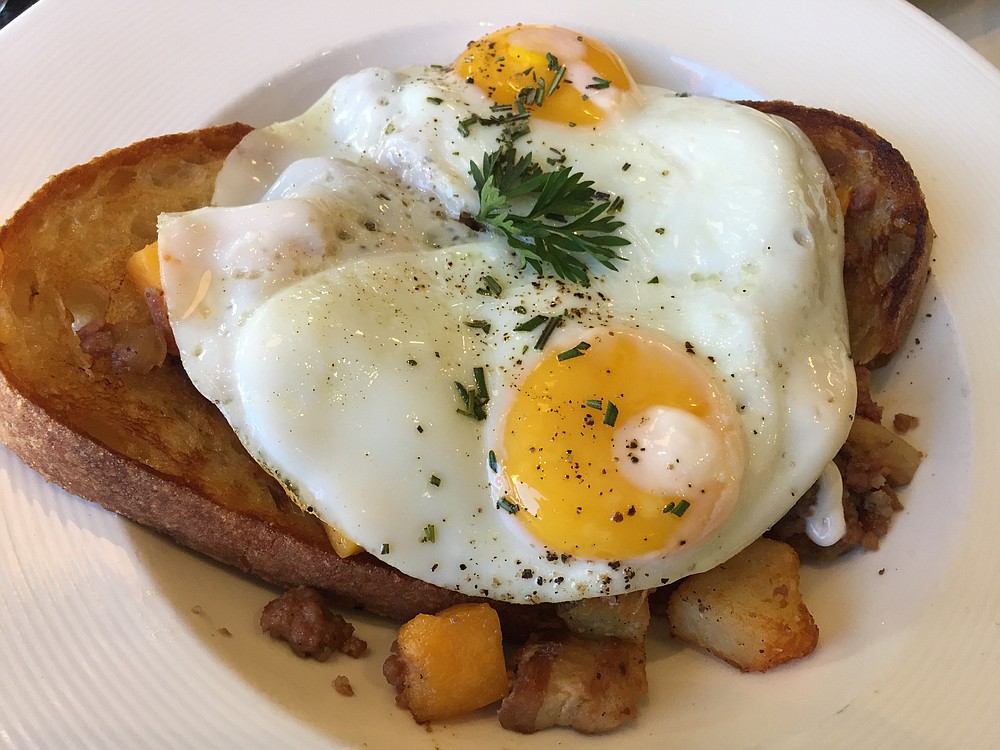 High hopes for the House Hash, but the saltiness of the bacon and sausage didn’t come through

I was more focused on the House Cured Salmon ($15), which was like lox and bagels but with sourdough toast instead of the bagel. The caper-herb cream cheese, jalapeño, pickled onion, and side salad come together to make a light dish that is meaty, briny, and slightly spicy. I took half home, and it was a great lunch later in the day.

My wife also ordered the Vegetable Hash ($14). It’s two eggs any style with cauliflower, broccoli, sweet potato, rainbow chard, with a jalapeño vinaigrette and sourdough toast. We were impressed, not just with the flavor but the way that the textures melted together. All the veggies take different cooking times, so you have to worry about one being too crunchy while another is too soft. That wasn’t the case: They blended well, the way a hash should. The jalapeño vinaigrette wasn’t as spicy as she expected. That was a good thing — it emphasized the vegetables but didn’t overpower them.

I had high hopes for the House Hash and Farmer’s Egg ($14), which had braised beef, house sausage, bacon, and caramelized veggies with sunny side up eggs and sourdough toast (love that sourdough toast!). I enjoyed the sweetness of the braised beef. I would have liked it more if I had tasted more of the saltiness associated with the bacon or sausage.

We will come back — me for the House Cured Salmon, her for the Veggie Hash.