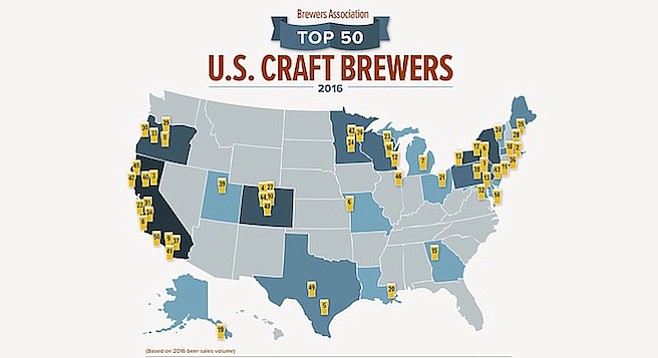 National craft beer trade group the Brewers Association released its annual lists of the top 50 American breweries by sales volume last week. While all four San Diego breweries included on last year's lists remained — each with a higher ranking — there were some notable changes.

Two big ones had to do with Ballast Point. Since 2016 was the company's first full year under the ownership of the Constellation Brands corporation, it no longer met the Brewers Association definition of craft brewer, and therefore did not appear on the list of the country's largest craft brewers, where it ranked #11 last year, one spot behind Stone Brewing.

However, Ballast Point did show up on the list of Top 50 Overall Brewing Companies, which was topped every year — in the same order — by Anheuser-Busch, Miller Coors, and Pabst Brewing Co.

Ballast Point rose four spots on that list to become the 13th largest beer company in the USA. That puts it four spots ahead of Stone Brewing, meaning that, by sales volume at least, Ballast Point has taken over the mantle of the largest brewer in San Diego. In 2014, it ranked 37th.

The Brewers Association would not release the sales numbers it used to tabulate these lists (it will publish them in its own The New Brewer magazine in May). Neither would Stone, nor Ballast Point.

However, Stone did release its production numbers. Including beer produced at breweries in Virginia and Berlin, Stone brewed approximately 345,000 barrels in 2016, up from 326,000 barrels in 2015 — a 6 percent increase. Ballast Point did not release production numbers, so its difficult yet to tell whether it topped Stone in the amount of beer brewed, in addition to sales.

Stone ranked #9 on the list of top craft brewers, reclaiming its highest rank after dropping to #10 last year. However, it's worth noting that Lagunitas Brewing, which ranked #6 in 2015, was also pulled from the craft list due to a partnership with Heineken. Stone fell two spots on the overall list to #17 (it was #14 two years ago).

Green Flash Brewing climbed four spots to become the 37th largest craft brewer by sales. Its production rose nearly 12 percent in 2016, to 91,040 barrels. That figure includes its production of beers for Alpine Beer Co., which it acquired in 2014. Overall, this increase was good enough to make Green Flash the 46th largest beer company — its second year in the top 50.

Finally, coming in at #41 on the craft beer list was Karl Strauss Brewing Co. Karl's rank on this list has fluctuated the past several years, usually in the low 40s. It ranked #39 in 2012, when it also cracked the top 50 overall, actually coming in at #50. Nevertheless, the reigning midsize brewery of the year increased production 4 percent in 2016, to 78,618 barrels.