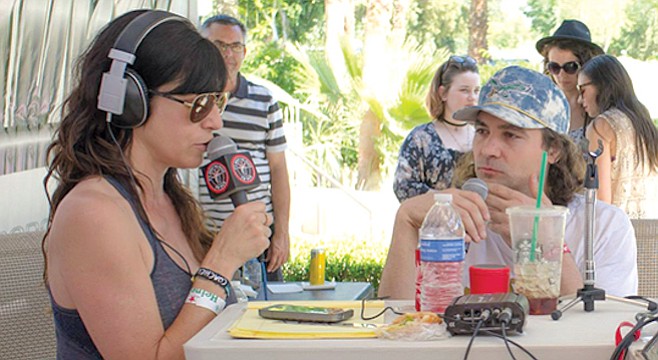 Next month will mark 20 years in San Diego radio for Hilary Chambers. Now holding down the midday DJ gig on 91X, she is also that station’s music director.

Since you are responsible for what gets played on your station and your airplay helped launched Jack Johnson’s career, your list of favorite SD bands matters...

“I walked into a bar near Bird Rock where the bands aren’t usually that good, and there was a great band doing a cover of the Beatles ‘Don’t Bring Me Down.’ I was enthralled. It was Mrs. Henry. I was super impressed. Dead Feather Moon is a whole other level. Every band associated with Al Howard and the Redwoods Music label is great.”

What one place captures the soul of San Diego?

“Bird’s Surf Shed is very San Diego. Not only is it a surf museum and library, Bird embodies the spirit of San Diego. He is so patient and generous and open-minded.”

Other local media you’re fond of?

“I like the new [Chris] Cantore and [Steve] Woods podcast on yewonline.com. It’s Chris’s new baby. They are based at the Iron Fist Brewing [1985 National Avenue #1132] in Barrio Logan. I love SounDiego and Tonight in San Diego. I was impressed at how passionate everyone was who put on Tonight In San Diego.”

“When I’m with my ten-year-old daughter, it’s Turquoise Beach or World Curry. When I’m with my boyfriend, it’s hiking Iron Mountain or Torrey Pines. When I lived in North County it was the Lost Abbey outpost in Cardiff called the Confessional.... I love all the outdoor music events like Ye Skallywag or Tacofest or all the beer festivals.