"We don't need any more overpriced apartments and condos.” 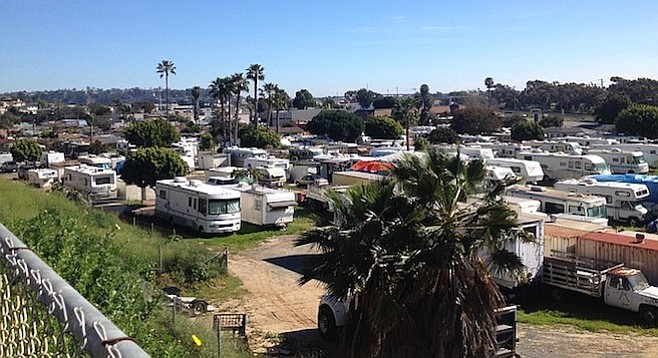 Fairfield Residential met with Bay Park and Clairemont residents on March 8 to discuss development of an approximately six-acre RV park (Coastal Trailer Villa) located at 1579 Morena Boulevard. The RV park has been in existence since 1950. Before that, it was a military barracks during WWII.

Shon Finch with Fairfield said the plan is to develop 150 luxury rental homes with on-site amenities. The units will not be for sale, he said. 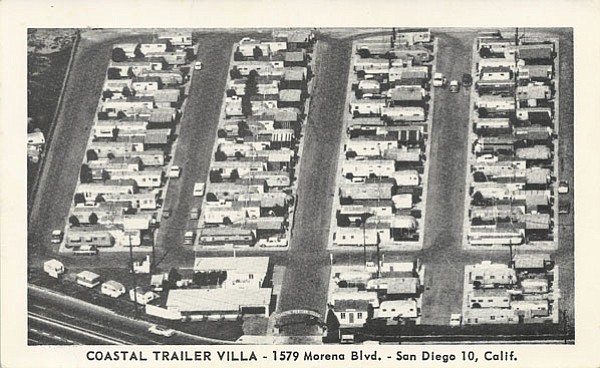 After WWII, the site was converted from military barracks to an RV park.

Building height, parking spaces and traffic flow are issues that commonly arise with residents in this area directly above Mission Bay Park. Finch said, “Building height will not exceed the community’s 30-foot limit. A traffic study has been prepared and is being reviewed by the City of San Diego.”

The city confirmed on March 10 that the first review of the project is underway and should be complete early this week.

Rezoning is one hurdle that Fairfield will have to face. The parcel is currently zoned for a mix of residential and commercial use (CC-4-2, CC-4-5, and RS-1-7). The developer applied in January to rezone it for medium-density multiple-dwelling zoning (RM-2-5). This zoning would allow for one dwelling unit for each 1500 square feet.

There won’t be any affordable or below-market-price units, according to Finch. Rents discussed at prior community meetings in January and April of 2016 pegged the average rent at around $2400 for 950-square-foot units (1–3 bedrooms). 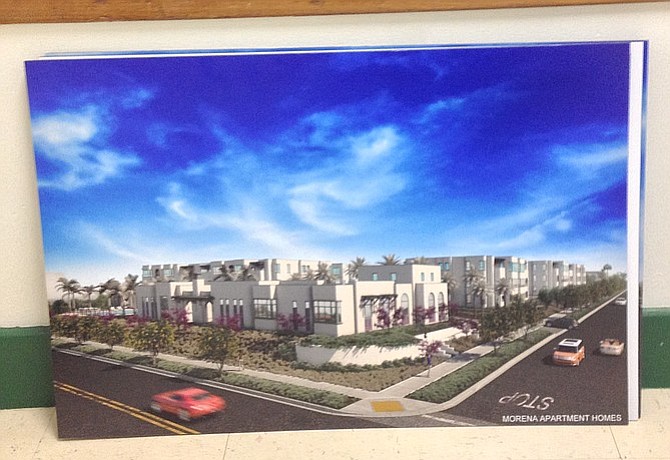 The RV park manager said the landowners are retired and that is likely prompting the sale. He isn’t certain if they’ll open up somewhere else. “In this area, there isn’t much land to build a park of this size. As far as current residents, they will have to move to South Bay or North County, depending on where their jobs are…. We have a little bit of everything: families, single people, retired people, we have business people, we have a lot of people that come in for business.”

He said about 80 to 85 percent of the people who live at the park are permanent residents — at least as permanent as the city’s ordinance will allow them to be: according to the manager, tenants have to move every six months. He said about 30 percent of his tenants go back and forth to other parks in East County or North County.

He hasn’t heard any word about when the park might be closing, though he said, “Usually managers are the last to know.”

As far as other RV-park options for current park residents, while there is a park a couple blocks down, the word is that it will be developed as well (see bottom of page 22).

There are three RV parks in the Pacific Beach area and there appears to be a couple in Coronado. Beyond that, one must start heading out to Chula Vista, La Mesa, and Lakeside for RV parks.

“I do like it here, but condos would make more sense,” said Ryan Fullem, who lives in the Coastal Trailer Villa RV Park. “I don't think me or anyone else who lives here has a choice. Money talks!”

Nearby resident Catherine Fisher said, “I think adding more overpriced homes is a terrible idea. The cost of living is so high in San Diego as it is, that’s why [RV] parks like this are needed for those not fortunate enough to afford a home or apartment to rent. We don't need any more overpriced apartments and condos.”

Armando Hysko said, “We live a block from it and I'm glad they are replacing the RV park. My only worry is the parking. Doesn't seem like there is enough room to put 150 units and at least as many parking spots.”

Reba Cox said, “I went to the meeting [March 8]…. They are hoping to get 265 parking spaces, which they think is more than enough. I live in a condo in Pacific Beach and I know that's not going to be enough. Most of the one-bedrooms are going to be couples and then the two-bedrooms will be two people who will have boyfriends and girlfriends. Add it up.”

Since the developer has been presenting their idea to the community for more than a year, I thought I would check in with councilmember Lorie Zapf’s office to see what kind of noise she may have heard from the community. So far, they said they haven’t heard a peep either way.

Dave Potter, an urban planner with more than 40 years of experience (about half of that time spent in government) said, “Based on my quick preliminary review it seems to be a good addition for the area.”

At the March 8 meeting, it was discussed that the Fairfield team would reconvene with the local planning group after the city completed the preliminary review.

If all goes well, Finch said, “We hope to have an approved project later this year and start construction around summer of 2018.”

This is absolute madness. Not only is affordable housing being eliminated, it's being destroyed to make way for "investment properties." We are witnessing the wholesale assault on individual ownership of property by REITs, cutting off the one sure avenue to equity available to private persons.

We are rapidly becoming a society which creates all its wealth through debt, such as rents, interest, and fees. This reliance on a literally empty means of production is a direct threat to free markets and free societies. But what if anything will we do about it?

Why is it that David Potter is the only one ever interviewed from the community? The local residents have consistently disagreed with him and said that he does not represent their opinions. Let's hear from the community leaders when interviewing the residents.