San Diegans for Safe Drones has something to say 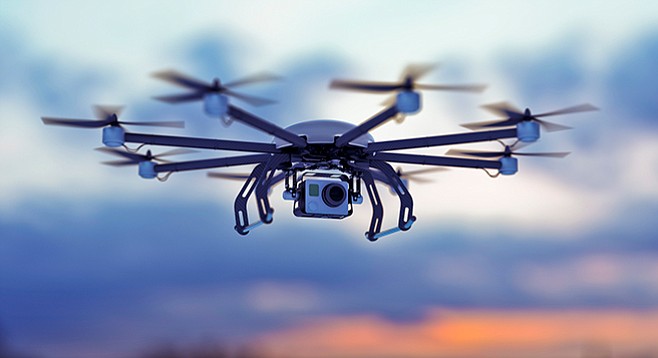 San Diego, already famous for the killer Predator drones made by General Atomics at its Poway plant, is becoming the center of a struggle between a group calling itself San Diegans for Safe Drones and a bevy of high-dollar lobbyists for the mini-drone industry.

Those opposing the current draft of a pending ordinance complain it is too lax, simply folding Federal Aviation Administration rules, seen by critics as pro-drone, into the municipal code. Interested industry parties who have been lining up at the city clerk’s office to register as influence-peddlers regarding the issue include Curt Pringle & Associates of Anaheim, representing AirMap, “a technology company which provides airspace management platform for drones.”

The February 27 filing goes on to say that Pringle will “monitor status, introduce client, [and] provide policy and technology feedback” on the proposed law. Three days earlier, AirMap’s Sezen Jones also registered to “monitor status” of the matter.

Late last month, Santa Monica’s AirMap raised $26 million in investment capital from San Diego–based Qualcomm, as well as Microsoft, Sony, and Chinese aircraft maker Yuneec, among others, likely assuring that members of the city council here, many of whom have received past Qualcomm political money, will pay close attention to what the startup has to say.