"I’ve also seen yellow police tape when I wasn’t sure what happened.” 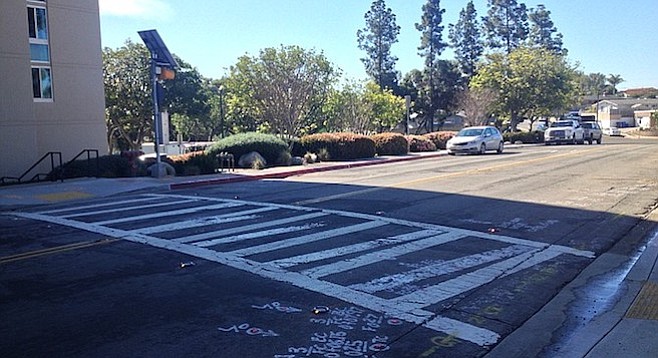 Sometime during the 2016 winter holidays, the city posted notices on Cowley Way (between Field Street and Iroquois Avenue) residents’ front doors. The notices stated that work would commence within a couple weeks to install a new and improved crosswalk to include push-button poles, warning signs, and flashing beacons. The notice stated that work was anticipated to be done by the end of January 2017.

January came and went with no action as far as the crosswalk, which already includes all of the above-mentioned bells and whistles. In fact, this same crosswalk, located at 2875 Cowley, was one of the first to have warning lights embedded into the crosswalk (installed 2004). The crosswalk sits in front of a 14-story senior building (Sorrento Tower) and leads to the Clairemont Village shopping center across the street.

On February 24, workers from city engineering were onsite hammering little pink squares of material near and within the crosswalk. When asked where they might be moving the crosswalk, the worker replied, “We have no idea yet.”

Cars are known to come barreling down this stretch of road, and no warning signs of the pedestrian crosswalk are present. Warnings don't appear until about halfway down the nearly half-mile-long block. To make matters worse, the long street curves so that even the 14-story tower located at the crosswalk can’t be seen when turning onto Cowley and Iroquois. 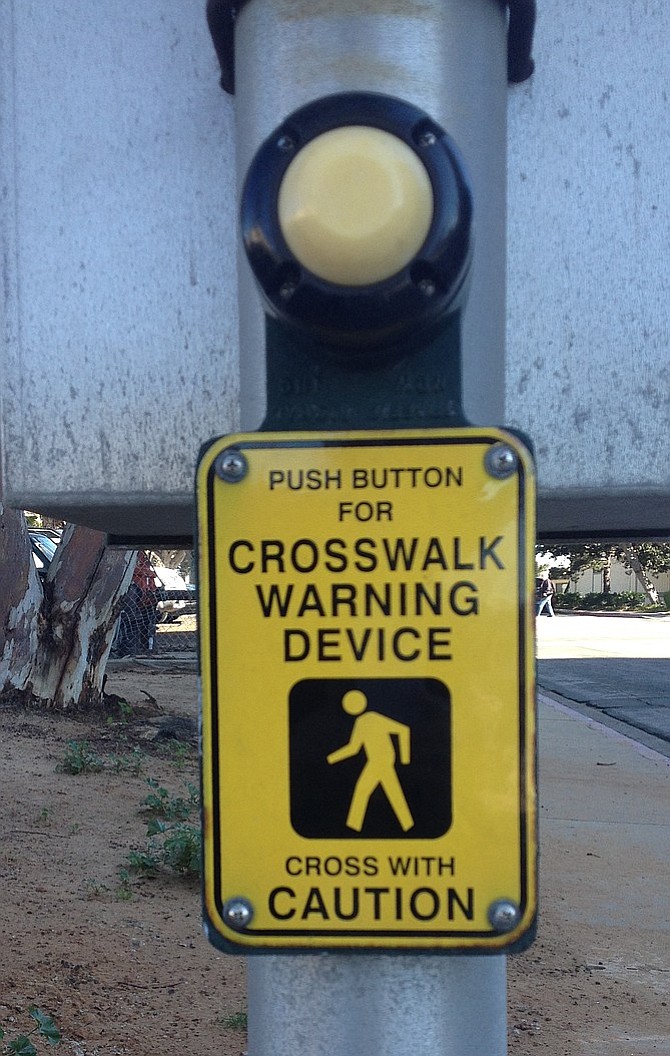 One senior crossed without pushing the button “because no one sees the damn things.”

“I’ve had a lot of close calls over the years,” says Joan, who has lived on the block since 2007. “I will never understand how anyone can come speeding down this street without giving the people that live here a second thought. I’ve seen more than one bicycle down after a close call or a direct hit more than once on that crosswalk. I’ve also seen yellow police tape when I wasn’t sure what happened.”

While I talked to Joan, I watched several senior citizens use the crosswalk without pushing the button to activate the embedded crosswalk lights. I stopped one of them to ask why not. An elderly gentleman said that he never bothers during the day “because no one sees the damn things.” He did say that he does use them when it’s dark.

Officer Billy Hernandez from the San Diego Police Department checked calls for this block of Cowley Way and said, “In the past 12 months, there has been two collision[s], one involving only one vehicle and the other involving a bicyclist and a vehicle.”

In 2015, on the same day a previous Reader article was published about this same crosswalk, two city workers showed up at the Cowley crosswalk saying there were plans to make it safer. One worker said a lot of people had been calling about the speeding problem. He also said the city was considering moving the sidewalk from its current location closer to Iroquois and adding lights on both sides of the street to allow drivers coming from Iroquois to have more warning there was a crosswalk ahead. 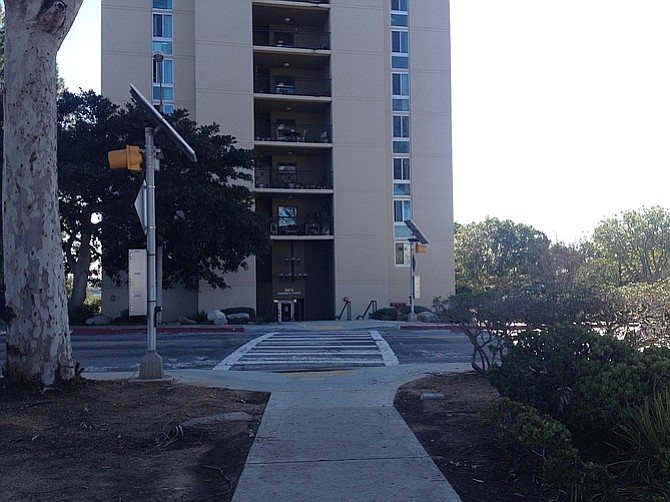 The crosswalk at the senior center joins a sidewalk that leads to the shopping center.

An employee who works at the senior tower recently said, “They [the contractor] actually wanted to move it farther away from our building but we worked with them to keep the crosswalk and change the layout.” She also said that speed bumps are not an option because the fire trucks can’t turn around on the block (firefighter/paramedics are frequent visitors to the senior tower).

According to the city’s project information online, it looks like upgrades to the crosswalk on Cowley are an add-on to other crosswalk projects in Pacific Beach (Garnet Avenue) and Point Loma (Chatsworth Boulevard and Catalina Boulevard).

According to the timeline, the project began preliminary design in 2014 with a closing date in early 2018. The project is estimated to cost $580,000.

Alec Phillipp from the city said “The project scope is to upgrade the flashing crosswalk installation and to make the installation’s curb ramps ADA compliant.”

“The flashing crosswalk is currently in construction, although equipment must be delivered. The project should be completed by May.”

In June 2015, mayor Kevin Faulconer announced his commitment to the Vision Zero campaign that vows to eliminate all traffic deaths by 2025. The city council formally adopted the initiative in October 2015.

Somehow "Vision Zero" say a lot about the traffic division and how they do things. If that department wasn't so busy increasing residential speed limits beyond safe and sane 25mph they'd have a lot more tax money to spend on crosswalks of this type to increase crossing safety of all San Diegans, young and old alike.

There is another of these crosswalks with imbedded lights on Jackson Drive in San Carlos. The remnants of it are still there. The thing hasn't worked in years.