Too much euthanasia vs. privatizing jobs 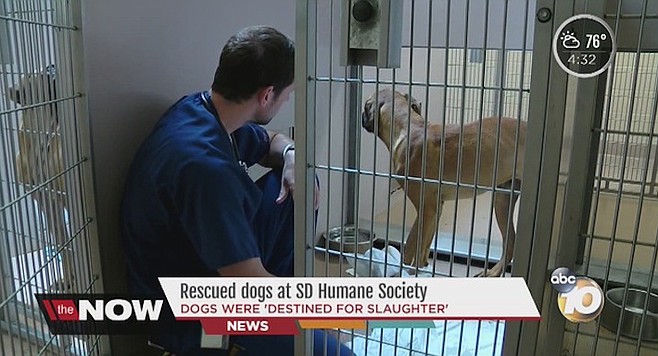 The San Diego Humane Society is poised to become top dog for animal services in San Diego County, as the county begins to negotiate service contract with the nonprofit.

With a target date of June 2018 for the outsourcing to begin, the Humane Society is preparing a proposal with specifics about costs and services. The group already contracts with six cities in the county — Imperial Beach became the sixth just a few months ago.

Along with the unincorporated county, the county department of animal services has contracts to provide services to the cities of San Diego, Encinitas, Solana Beach, Santee, and two others. The county has to give its clients a year’s notice by June 30, if it will no longer provide services.

Chula Vista, which has its own animal services staff, initially expressed interest but didn’t submit a proposal, according to county records.

The county department has been awash in controversy for the past few years as volunteers who were terminated or who left voluntarily revealed that they believe the department is manipulating animal assessments to allow the euthanizing of adoptable animals. As a result of public pressure, the department only recently began opening its shelters on Sunday to increase adoptions — which costs an additional $800,000 in the coming year, according to county documents..

David Lagstein from the Service Employees International Union Local 221, says county officials are using the controversy as a reason to outsource.

“There were management policies on successful communications with volunteers that weren’t followed and now the county is using that anger to privatize these jobs,” he said.

County spokesman Michael Workman said the move is not a reaction to the controversy.

“Cost is the main driver,” he said in an email. “We currently have a 93 percent-plus save rate on dogs.”

The department’s budget for the current fiscal year is about $19 million, with $13.6 million spent on employees, including benefits and retirement. About 128 people work at the three shelters in Carlsbad, Bonita, and on Gaines Street in San Diego, when the department shares a campus with the humane society.

Along with picking up lost and injured animals, the county department handles licensing and anti-rabies requirements, and licensing security dogs. Last year, animal services managed about 120,000 licenses, took in about 20,000 animals and reunited about 4,600 with their owners. About 11,800 more were adopted from the three shelter locations, according to county reports.

The humane society’s existing contracts with Poway, Escondido, San Marcos, Vista, and Oceanside cost cities between $226,000 (Poway) and $918,000 (Escondido) a year. Staff in San Marcos and Oceanside both praised the services the city receives.

Lagstein from SEIU said that he is worried about the employees who stand to lose their jobs, and about the humane society’s ability to deliver the more difficult services.

“This is an issue of public safety,” he said. “Last week, people had rattlesnakes near their homes and our people went out to address that. They deal with dangerous dogs and exotic animals, and the level of experience and qualifications matter.”

But humane society chief law enforcement officer Steven MacKinnon says the group has plenty of experience dealing with such challenges.

“We have officers on call during the hours when the shelters are not open to respond to calls in our contract cities,” he said in an email. “Dispatchers from the local police or sheriff’s department will call the on-call officer. We require our officers to have a 30-minute response time.”

Having the humane society involved offers benefits, staff said. The group evaluates animals that come in immediately, and it offers training classes to help owners deal with problems so that someone who claims a lost pet or gets a new one has immediate access to these resources.

The organization, led by its board chairman, Gary Weitzman, DVM, believes in zero euthanasia, staff said. “That’s a vision we carry into our work with the cities,” an official said.

(Disclosure: this reporter has a Humane Society dog and a county animal services cat.)

Despite any cost effectiveness or other arguments, for me the concern with any outsourcing of public services is what private parties cannot (and should not) do: exercise police power. County Animal Services has the ability to cite for violations and will show up with city police or county sheriffs to enforce their decisions. I can't see the Humane Society having that kind of power or relationship—nor would I want them to.

As was just commented about Civic San Diego, our elected leaders keep begging off their governance responsibilities to those with no public accountability (but lots of hidden benefits for the officials approving these arrangements). And whatever excuse or backstory they use to do so should never distract us from seeing this for what it is: unacceptable.

David Lagstein contacted me because he was concerned that his rushed comments during a short phone interview mischaracterized the county's policies and problems. He said that he meant to say that management policies were the problem, not that the county had policies that were implemented incorrectly.

It is a fine distinction that suggests the problems rest with the policy-makers and not the employees. I agreed to clarify that this is what he meant to say.