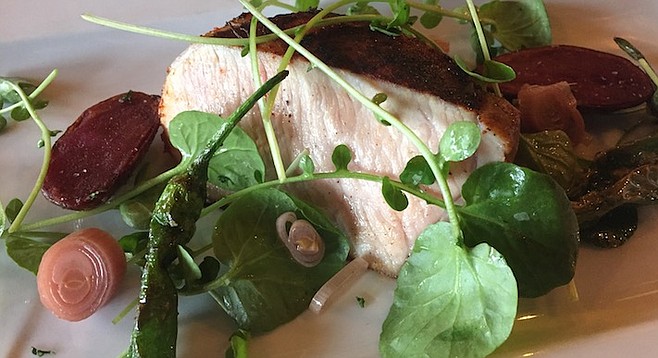 I love an early happy hour, or as Leroy’s Kitchen and Lounge refers to their late afternoon-but-not-quite-early-evening discount time, “Social Hour.” Leroy’s starts at 3:00 p.m., allowing three whole hours for discounted drinks and half-off select appetizers. But discounts are only one of the perks to a good social hour — during these odd hours, most Nine-to-Fivers are still in an office, which means a popular place is a lot less crowded, and we feel relaxed enough to linger, assured that we are not keeping anybody from getting a table. 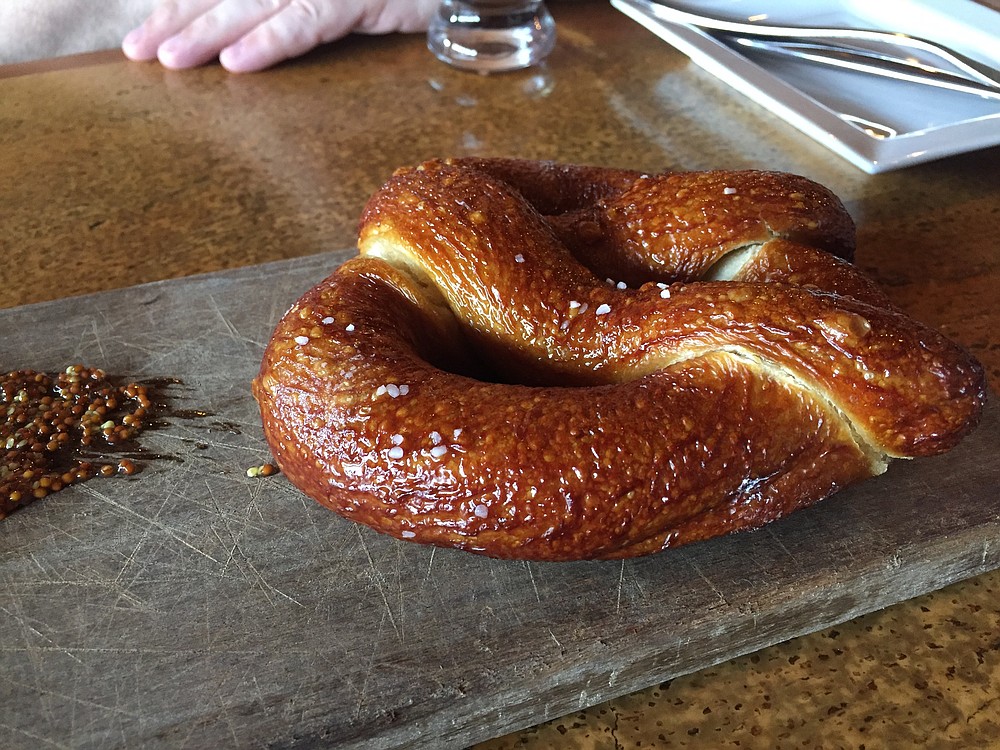 On this recent visit, David and I arrived at Leroy’s a little after 4:00 p.m. Though it was early, we’d worked through lunch, and the day was not without its frustrations. Our last meeting had brought us to Coronado, and Leroy’s is our go-to place on the island. I began my process of unwinding with a house invention, called Going Back to Cali (Rittenhouse Rye, lemon, orange, and a red wine float). It was refreshing and balanced. I ordered another, and though David began with a Jalisco Daiquiri (mezcal, grapefruit, lime), he ended up switching and ordering the same as me for our second round. 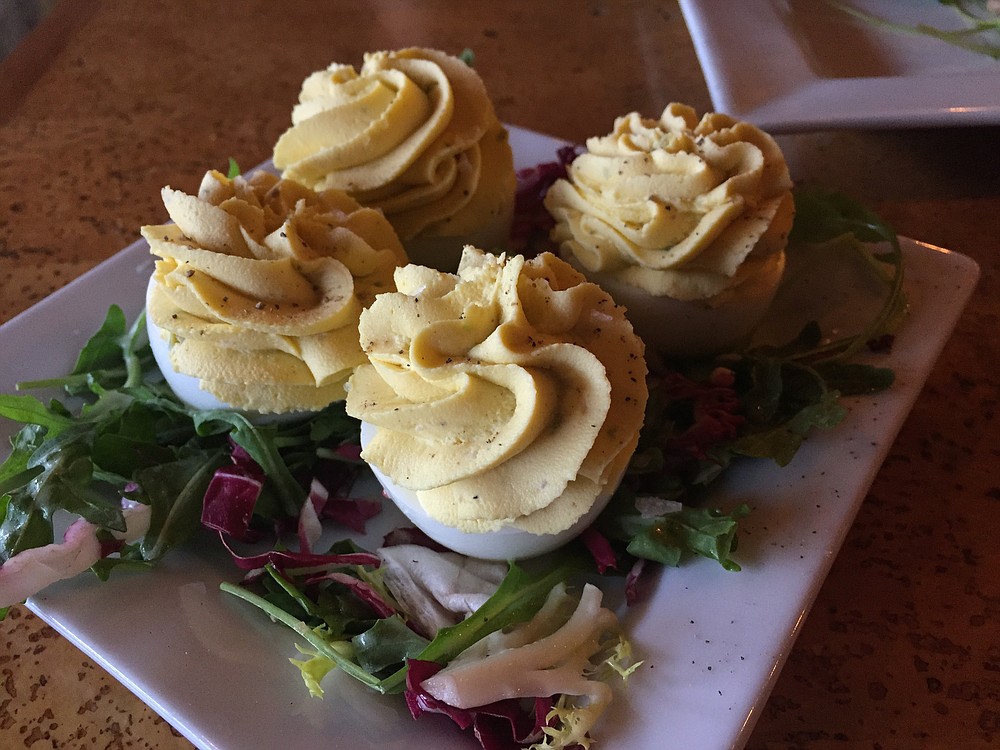 Not your typical deviled eggs, these are made with sweet Indian spices

To accompany our cocktails we started with the Bavarian Pretzel, which is served with beer mustard and cheddar fondue. We could have used more of the fondue, mostly because it was such a creamy and satisfying complement to the hot, chewy dough. The mustard cut the richness of the cheese, so my perfect bite was pretzel dipped in cheese, with a bit of the mustard seed on top. 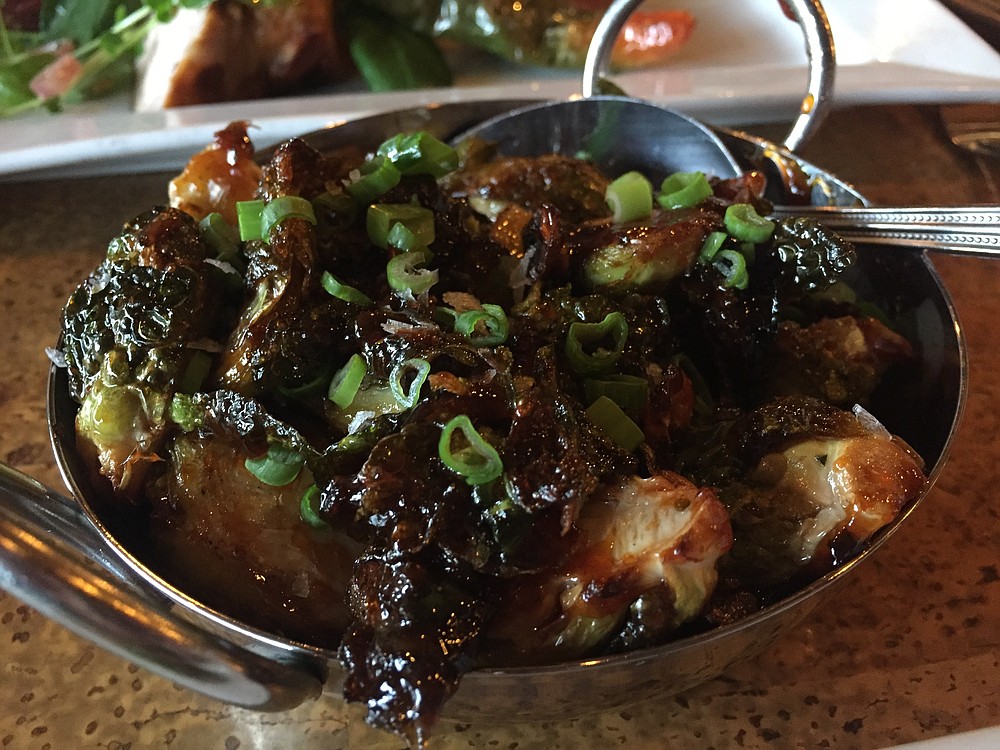 Brussels sprouts, a little too sweet this time

Next we got the Deviled Eggs, with an unusual mixture of mango chutney and garam masala. This added a sweetness I enjoyed. Missing the gentle bite of mustard, David claimed to not like this preparation as much as others, but that didn’t keep him from eating his full share, even after I offered to take one off his hands.

The one disappointment of the evening was the brussels sprouts. A few years ago, we sampled our favorite brussels sprouts dish right here, and were told that plum wine had been used in its preparation. This version was missing that excitement, and according to the menu, they’re now using honey instead of plum wine, which adds more sweetness than depth. I was over it after two bites.

The best dish of the night came in the form of pork. We’d slowly sipped and nibbled our way to the dinner menu, and decided to split an entree. David chose the Duroc pork chop. The thick cut was not over or undercooked, but a perfect medium. Meat from Duroc pigs is known for its ability to maintain moisture, which was evident in the juice that dripped from each forkful. The sides were minimal (watercress, a shishito pepper, some pickled onion, a few pieces of fried fingerling potato), and there was no sauce, but I would have been loathe to mask the light seasoning and natural flavor of the pork.