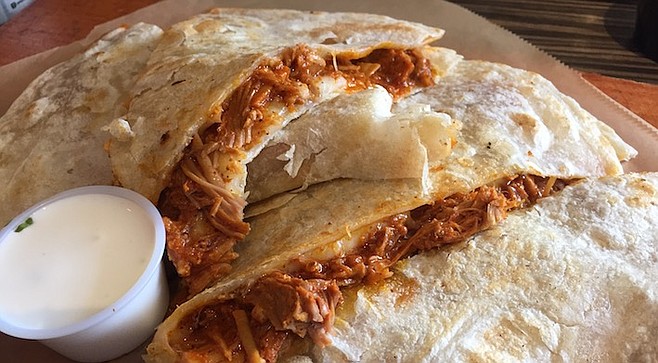 In the movie Once Upon a Time in Mexico, Johnny Depp plays a dangerous and dashing CIA agent with a penchant for puerco pibil. “It is a slow-roasted pork,” Depp’s character explains as he takes a bite. “Nothing fancy, just happens to be my favorite, and I order it at every dive I go to in this country.” After commenting on how much he was enjoying that particular iteration of his favorite food, Depp revealed how ruthless and calculated his character could be with the famous lines, “It is so good that when I’m finished with it, I’ll pay my check, walk straight into the kitchen and shoot the cook. Because that’s what I do. I restore the balance to this country.”

This now-infamous pork dish, better known by its proper name, Cochinita Pibil, happens to be the house special at Cocina 35, a self-proclaimed “Old School Mexican” restaurant. With frequently changing cafeteria style trays filled with your abuela’s greatest hits, the place is reminiscent of Super Cocina, but with a more modern metropolitan flair.

Salsas. I became overwhelmed by options.

One afternoon, while driving aimlessly in search of lunch, David and I pulled up at a red light beside our friend Josue. We quickly decided to go somewhere together, and Josue, who originally hails from Oaxaca and Mexico City, led us to Cocina 35. I’m glad he was there, because once at the counter, I became overwhelmed by options. It’s a comida corrida, or build your own plate, restaurant, and I didn’t know where to begin.

Plenty of plated dishes were on display, to let us see what we were in for. As a lover of chilaquiles, I wouldn’t think it possible for me to walk into a place with nearly a dozen different options for chilaquiles, a place with the tagline “Best Chilaquiles in Town,” and order anything but chilaquiles. But when Josue ordered a quesadilla, I found myself doing the same. Not just any quesadilla, mind you. I got the House Special: cochinita pibil, on a housemade flour tortilla, and a side of beans.

I never order quesadillas. And I hadn’t seen it on the menu. But while I was still hemming and hawing over which chilaquiles dish to order, Josue was handed his quesadilla, and I swear as the steam wafted from the meaty center of the tortilla, I heard it whisper, *Quieres esto.*

I helped myself to the extensive salsa bar, and joined David and Josue at the table. When I took my first bite, I marveled at the complexity in the sauce. The sweet depth of the spices making up the achiote paste (cloves, peppers, garlic, allspice, orange), mixed with the tender and savory pork, covered in cheese, all in that buttery tortilla: this thing in my hand, this simple quesadilla, had more circles of flavor than even Dante could have imagined.

David was jealous. He enjoyed his carnitas quesadilla, but when he took a bite of mine, he kicked himself for not ordering the pibil. I took pity and gave him an entire triangular section of my quesadilla. Whenever we make it back to finally try those famed chilaquiles, I’m pretty sure I won’t have to stand around wondering which to get — Chilaquiles Bomba is the one that comes with the cochinita pibil.