"I was really inspired by Tijuana No!" says Latinized Hawk Auburn guitarman 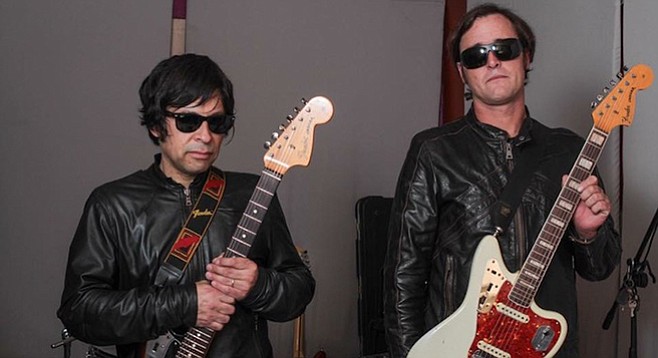 When XETV Channel 6 went off the air last month, guitarist Raul Gonzales was one of some 60 employees who lost their jobs; he was a programming engineer in the station’s master control studio in Tijuana.

While he is looking for his next day-job, Gonzales makes guitar effects pedals. He also plays in the dark dream-pop band known as Hawk Auburn. Like La Re and Electric Healing Sound, the four-man band has Tijuana members and regularly plays gigs on both sides of the border.

“When we come up to San Diego to play I have to drive the equipment, and the other guys come up separately,” says Hawk Auburn singer/guitarist Adam Hall. “I am the only U.S. citizen. They have visas and everything but if they come with equipment they can get in trouble about working here.”

Hall moved to TJ at age eight. “I was too young to get into Iguana’s,” he says of the early-’90s Tijuana showcase. “I was one of the kids who hung out outside with a skateboard.... Back then I loved the Mexican Jumping Frijoles, a TJ ripoff of the Red Hot Chili Peppers. I was really inspired by Tijuana No! Their lead singer Luis Güereña was the main reason many bands came to play in TJ. He died in 2001 from a heroin overdose. He was just too much into drugs.”

But unlike Tijuana No!, Hall doesn’t do rock en español lyrics. “I always knew when I got into music I would sing in English. It just always seemed to me rock was more natural when it’s sung in English.”

Although he’s been rocking since ’04, Hall says he was sidelined for a few years by substance abuse. He got serious with Hawk Auburn in 2011, “…when I got clean.”

While the Moustache Bar, Black Box, and other Calle Sexta TJ venues are now hosting bands from all over the world, “The TJ music scene ain’t all that great,” Hall admits. “A lot of serious Tijuana bands like my friends in Vaya Futuro think they have to move to Mexico City. They think they aren’t going to go anywhere if they stay in Tijuana. Maybe if I was in my 20s and wasn’t married with kids I’d move to Portland or New York or Seattle.”

Hawk Auburn’s ten-song Sweet Evil album is available for download; the band appears June 26 at the Casbah, June 30 at Moustache Bar, and July 1 at the Ken Club.