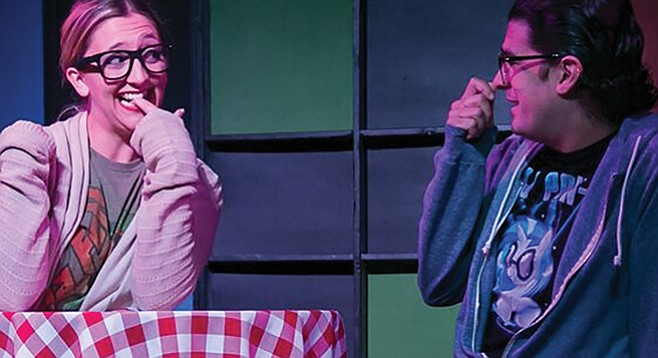 Early on in O.B. Playhouse’s production of I Love You, You’re Perfect, Now Change, Tara Sampson, playing one of many, interchangeable female characters in this musical revue of love and dating, leans heavy on the Sexy Baby Voice to (quite effectively) put an innocent/wheedling/pseudocharming spin on a nerdy chick out on a date with a nerdy guy (played by the improbably named Juztin Thyme); both of whom need to embrace their nerdiness and the red hot nerd love that nerdily follows.

I Love You, You're Perfect, Now Change

In a show that riffs on every stereotype there is in re the dating game, does it really surprise that the Sexy Baby Voice makes an appearance?

A few years back, Sexy Baby Voice came under fire in certain sections of the media; with PBS-type commentators lamenting the ubiquity with which young women pitch their voices into a register far higher than that which adults were meant to occupy. Of course, like so many things that raise a solid fortnight’s worth of public furor, the voice did not cease to exist because it momentarily captivated the goldfish-level attention span of the general public. For further examples of things that seemed super important for about a week before the world promptly moved on, see Joseph Kony; Lou Gehrig’s Disease, and the president’s practical tutorial on sexual assault.

But I see the Sexy Baby Voice as just another expression of infantile America. In a society where it’s perfectly normal for people with MBAs to dish on The Hunger Games books around the water cooler, people seem to prefer their violence and lewdness in (admittedly delightful) cartoon format, and every food now comes in Unicorn flavor, why shouldn’t grown women talk like little girls. It may not be (hint: it probably isn’t) a good thing, but it totally makes sense.

Interestingly, I Love You, You’re Perfect, Now Change is “old” enough (1996) that the adults in the show spend precious little time acting like overgrown children. At one point, a guy actually calls a girl up after a date. He doesn’t text her, or send her a snap — he calls. How weird for that to seem out of place.

Playing at O.B. Playhouse through June 25.