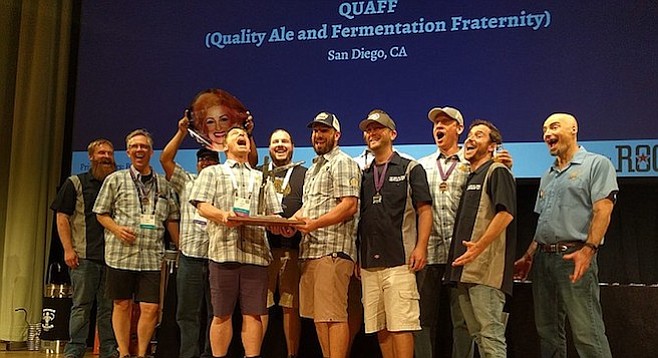 Several San Diego breweries added to their awards caches at the state fair over the weekend. Local homebrewers also made their prowess known, both on state and national levels.

The biggest winners included Coronado Brewing and South Park Brewing, each claiming two golds and a silver. Rip Current Brewing added two golds of its own.

One of the gold medals South Park received was in a new style category — New England IPA/Vermont IPA — representing the hazy IPA trend that has surged in popularity over the past year. South Park's second gold is shared with its sister brewery Monkey Paw, with an herb-and-honey beer made in collaboration with women-in-brewing club Pink Boots Society. Monkey Paw also claimed a gold of its own in the "alternative fermentables" category.

However, in National Homebrew Competition results also announced this weekend, QUAFF won the homebrew club award for the second straight year, its seventh in 20 years competing.

The list of San Diego winners at California State Fair commercial beer competition is below. Full results may be found here.