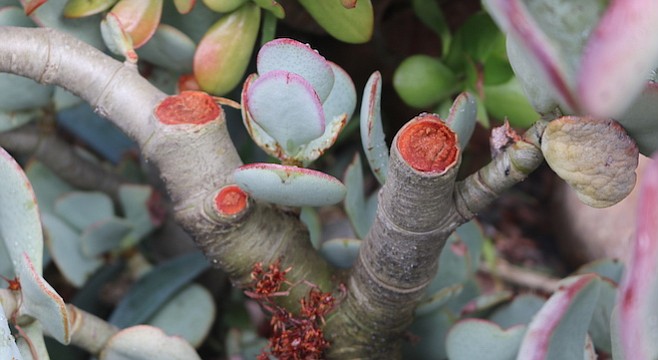 "Yesterday, a woman parked her white Prius right there [in front of my house],” said Steve from University Heights, “then started to cut my succulents (with a pruner), and left. That’s stealing!” 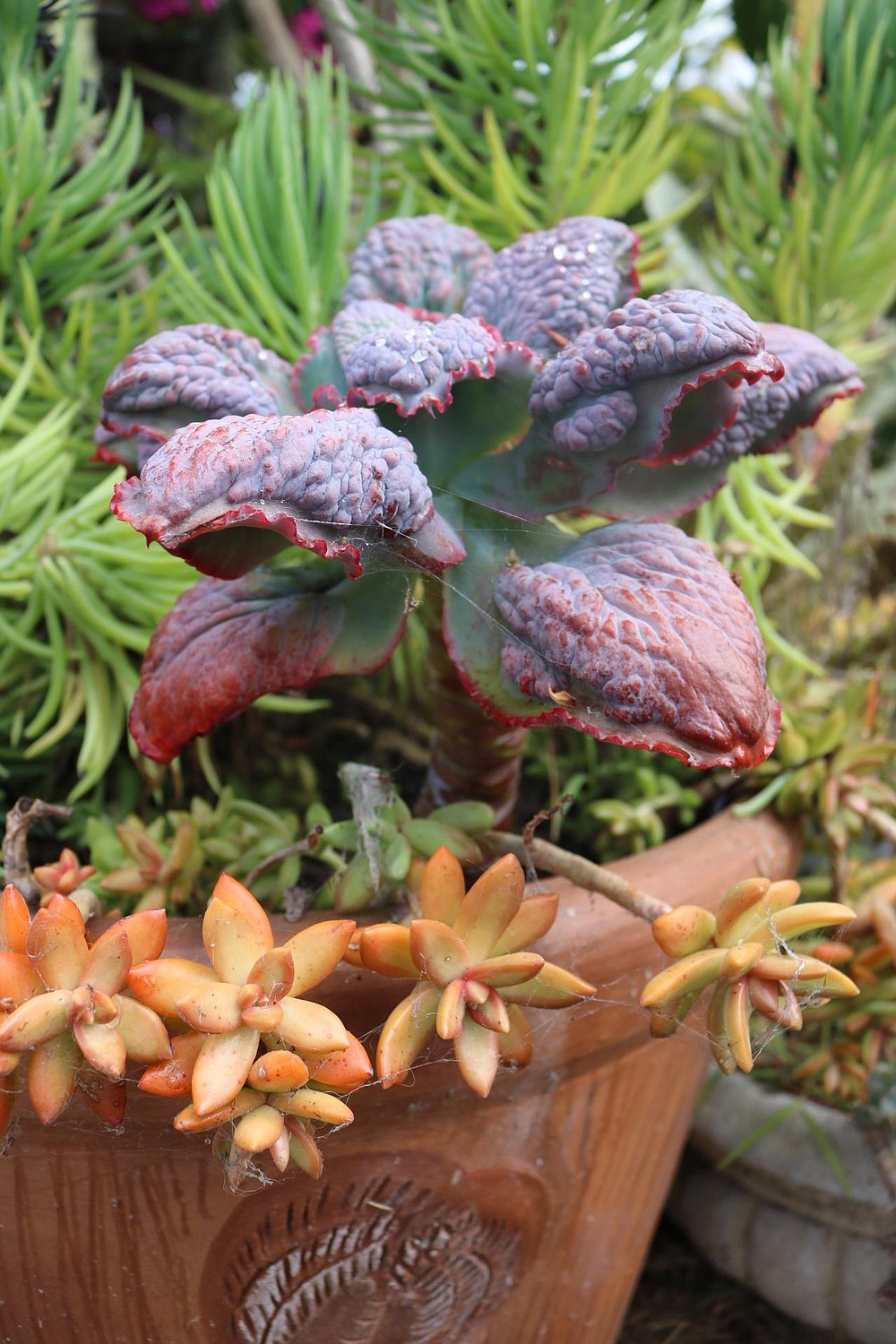 Steve, 67, is a retired manager of the Balboa Park maintenance department. On June 10, he and his neighbor were targets of yet another plant thief in their neighborhood. “It's sad, I give these things away all of the time,” he said, “and why do they cut it up top — when they should cut it lower?” 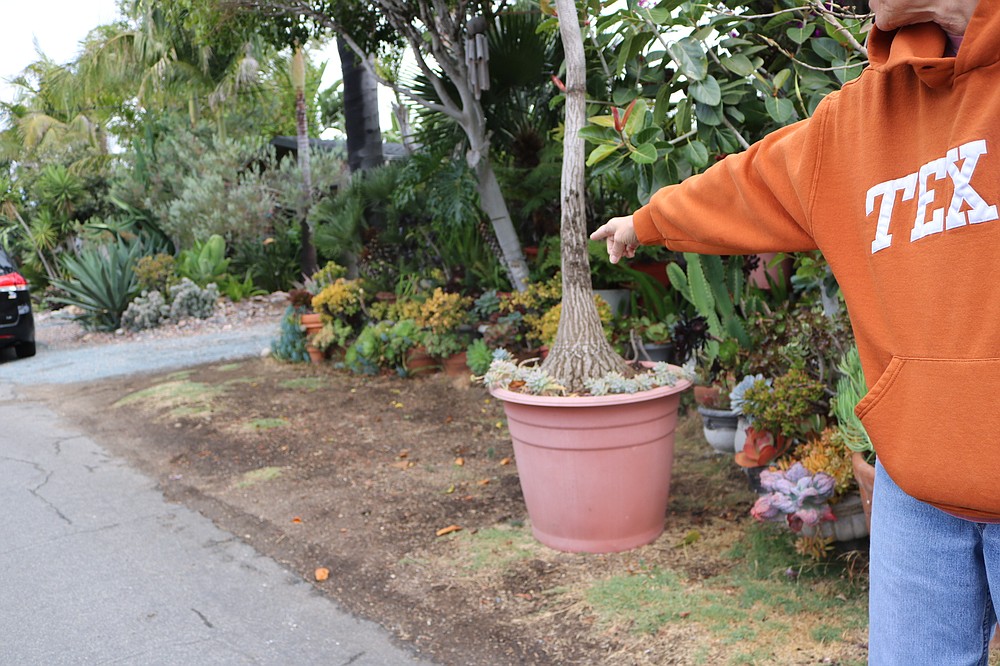 Pat pointing to where the Prius was parked when the plants were jacked, then hand sanitizer applied

Pat, 59, is Steve’s next-door neighbor. “… she opened her passenger door, snipped some of mine, put them in her [Prius] car, used some hand sanitizer to wash her hands,” she said, “then left without leaving a thank you note.” 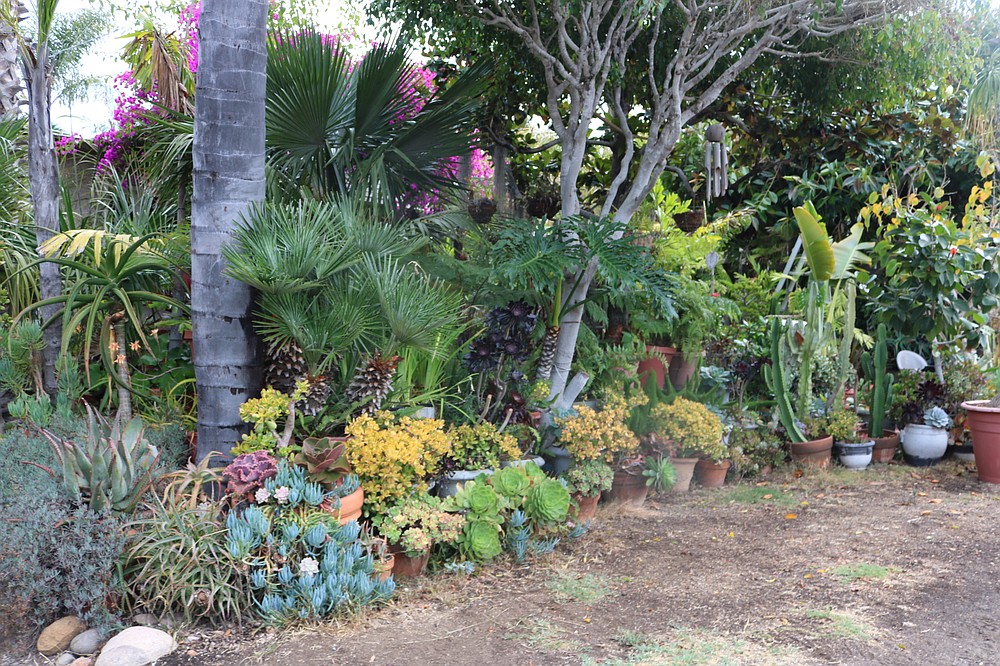 Both Steve and Pat live in a semisecluded area off of Madison Avenue. Because their homes are covered by their plant collections, the two can see outside their gardens, but it’s difficult for the perpetrators to see inside their homes, especially when the sun’s out.

“Shes a blonde and about yay tall,” Pat said, “and I warned some of our neighbors by posting photos of the egregious pruning where the thieves cut our plants in the middle.”

Pat posted the photos on the crime and safety section of a social media thread started by Heather M. from North Park.

Heather, 33, was victimized on June 6. “It’s extremely disappointing and rather infuriating that someone would walk onto my property (on Ohio Street by Polk Avenue) and take our hanging succulent planter from our front yard.” She also posted a photo of her shepherd hook plant hanger; sans the succulent, which she valued at around $30. 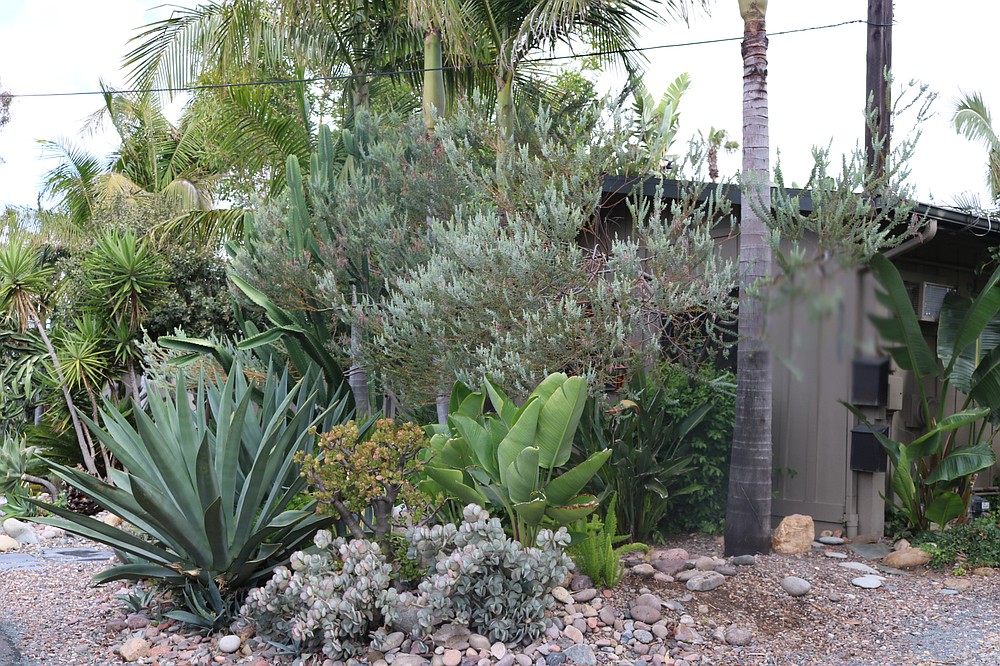 “A few months ago, someone got into my back yard (near Kansas Street and Lincoln Avenue) and stole a dwarf orange tree,” said another North Park neighbor. “They yanked it right out of the ground! It really sucked, so I know how you must be feeling.”

A male who lives by Illinois Street and Howard Avenue was jacked as well. “I recently also had plants stolen — two flower pots taken right off my front porch. It’s infuriating,” he said. “Who steals plants?”

Steve and Pat noticed another plant thief that visited before Labor Day. They said that she was a blonde too; just not as green as their most recent visitor. “She drove an oxidized Ford Escort,” they said.

Pat wants her neighbors to know that the scandalous snipping’s gotta stop because “it’s wrong,” and the least that the perps can do is “knock on her door and ask.” 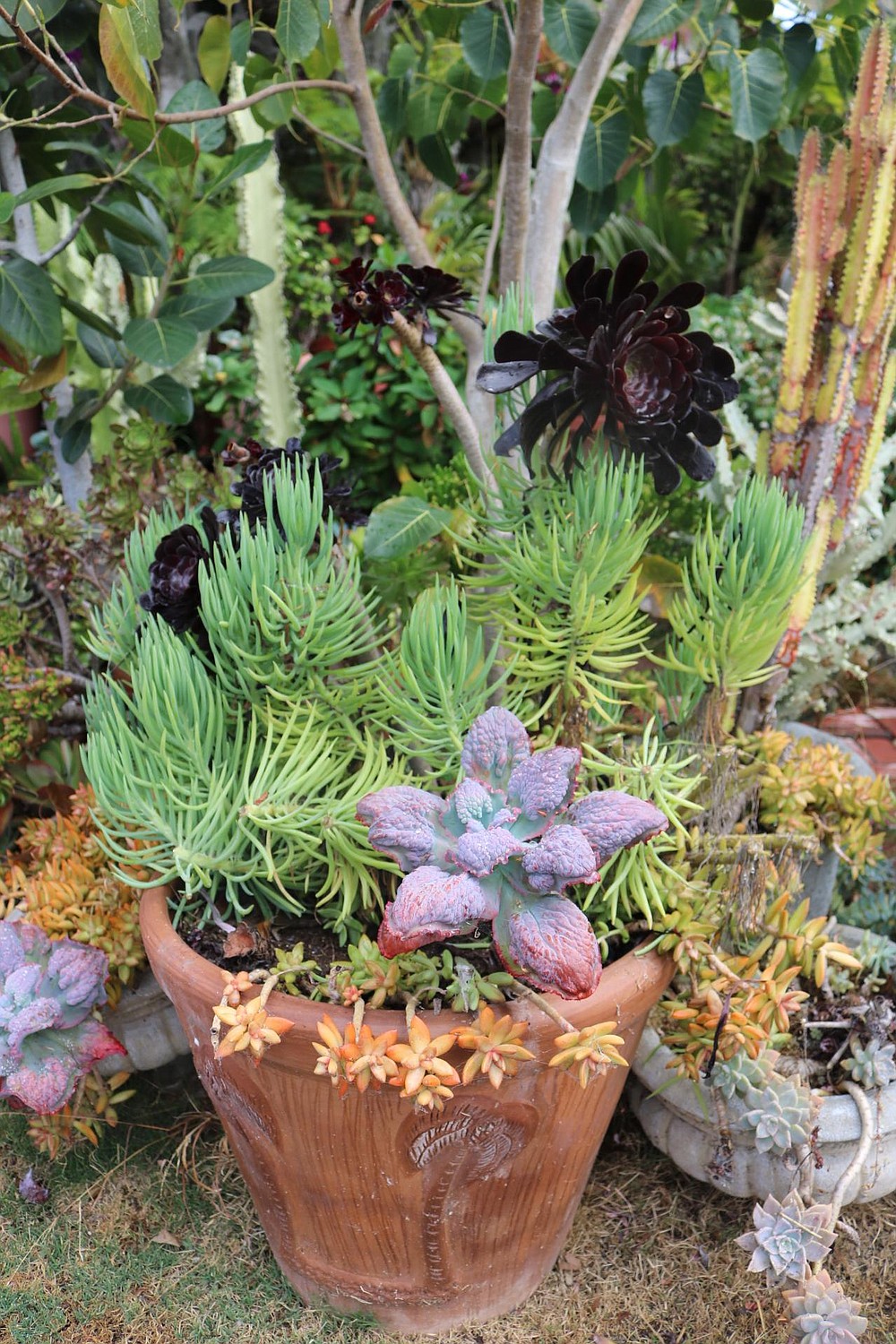 Steve isn’t as forgiving because of the thieves’ sloppy pruning, which disrupts the visual flow of his enormous plant collection. He replaced his lawn with a variety of succulents, cacti, and other subtropical plants — to be greener. “Succulents and cacti require less water and maintenance,” he said, “and since the drought they have been increasingly popular.”

No police reports were made as of yet, but Pat, Steve and Heather said that they will be installing video cameras to cover their gardens.

If you have a Prius, you can certainly afford to buy your own plants. Does she also shoplift at the supermarket, or have "sticky fingers" at thrift stores? I wouldn't be surprised.

Since most gardeners will happily provide cuttings of plants like succulents, there's just no reason to steal them. The pattern of ripping them off in broad daylight and escaping in a Prius (a Prius, really?) shows something. Just what it shows isn't apparent.

I am sure this Mike Madriaga is a great guy but he is a lazy writer. This dude fires up his laptop and trolls Nextdoor for stories. He finds something juicy, takes some pictures and formulates a lame story that the even lamer Reader snaps up. (There are other "writers" here equally as guilty.) Oh, how the mighty have fallen. Where once this publication had great stringers roaming their neighborhoods in search of dynamite tips and breaking scandals, now it is all about reading Nextdoor and typing away. This is sadly indicative of a major decline in the overall quality of the Reader. Tis a shame. 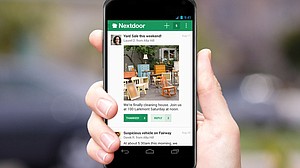 no need to leave your home to "write" a "story" for the Reader. by jazjones

Without a police report, actual pix of the action and a license plate number, this is just whining.

Exactly! I can't believe how the Reader pays for "stories" from anyone who just trolls Nextdoor for content. Lame. Nextdoor is full of these whiny stories. Someone left a sofa in the alley! Oh noes! Its a story! The Wild Sofa dumpers of North Park! The Evil Dog Poop Leavers of Kensington! It's just silly. In between the missing cats and the evil hoodies walking around the hood there can be some good info but you have to dig deeper and deeper to find it. Reader, please do not encourage this, nobody wants to read dumb recaps of Nextdoor threads.

Ugly side of succulents. I want one of those front yards people put time and creativity into with lots of succ variety but can't just take it from somebody. Someday maybe a tiny piece where nothing's noticeably absent. Spreads and grows easy so better to go get your own from Home Depot and probably still the Sports Arena swap meet cheap.