Will current IGFA record of 10.6-pound shortfin corvina be broken? 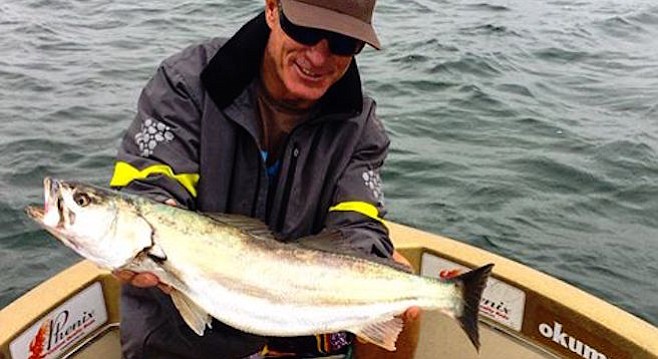 The word is that the shortfin corvina and halibut are on the chew in the bays. San Diego Bay and Mission Bay can be excellent fisheries for spotted bay bass and sand bass through the summer, but late springtime is when the shortfin corbina and halibut start working the edges before the water warms up and the halibut slide back into the cooler troughs. The corvina tend to move with the bait as the fry grow and move out of the bay over the summer. I have read many accounts of quality shortfin corvina to over 8 pounds from either bay. The current IGFA record is 10.6 pounds.

Shortfin corvina are often mistaken for juvenile white seabass, but there are a few telltale differences that are hard to miss. The white seabass doesn’t have the inner fangs at the roof of the mouth that the corvina sports, and white seabass tend to have vertical broad bars on its side and a ridge along its belly called a "zipper." Shortfin corvina are excellent table fare, akin to the other fish in the croaker family with white flakey meat and a mild natural flavor. These fish generally feed in the mid to upper water column and respond well to medium running crankbaits, spoons and swimbaits.

Shortfin corvina first appeared in San Diego Bay around 1990 due, probably, to moving in with warm El Niño water and remaining due to the plethora of baitfish. At first, most caught were smallish, 14 inches or so. Now, after a quarter-century in the bays, they are averaging much larger and towards their max length around 36 inches. 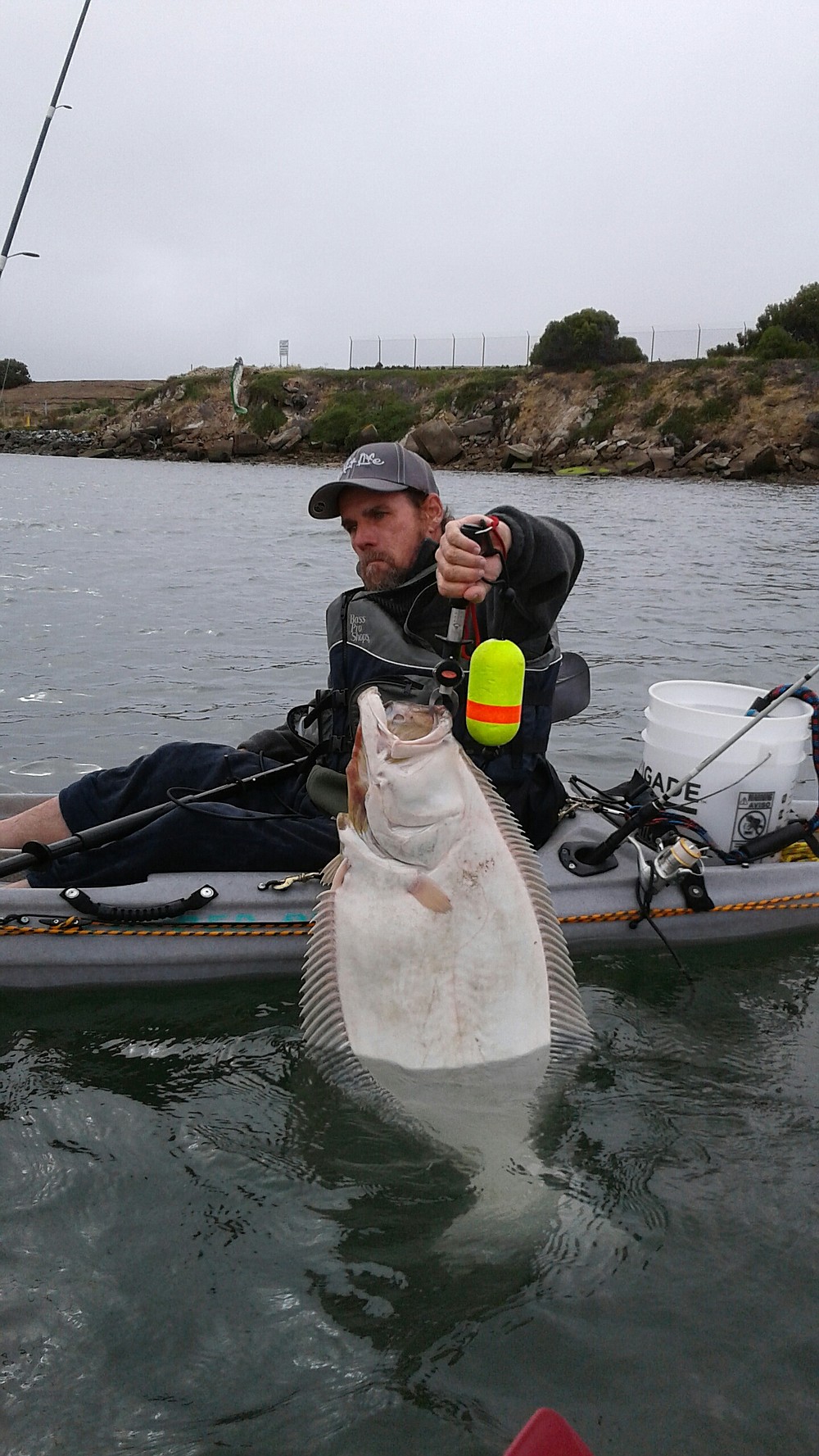 A shot of a friend Chris with a nice 15-pound halibut from off the poles at the seaplane ramps.

The halibut are biting well, especially off the edges of the channel to the edge of the eelgrass as the low drops into slack. The reason is obvious; they are a broad, flat fish and hunting in the current is not their forte, they are ambush hunters that feed more during lesser tide swings and slacks, in spite of the many anglers out there that insist halibut bite better in a hard-running current. They are flat-wrong – as wrong as folks that thought the world was flat. Think about it. If you were built like a kite and had to go catch a chicken, you’d have a hard time putting bird on the table on a windy day. It’s just that simple.

As the tide slows, the halibut move from their shelter up the edges to nail their prey as it passes. As the tide drops the bait gets pushed to the outer edges of the eel grass, over the holes. I’ve caught more decent bay halibut at the edges of these ambush points, whether along the eelgrass cut, or deeper, along the channel cut near the shallower flats leading up to the eelgrass. As the tide slacks, I’ll move closer to the eelgrass and cast to the deep edge, right at the edge, and let it sink as though I were flipping on a piling. If it gets hung in the eelgrass, I casted just a tad too far.

On the cast, I let sink and sit an extra count before slowly hopping it across the bottom back to whatever fishing platform I am angling from. I generally use grubs, twin-tail or single, in lighter colors with lots of flake on a plain bullet-style leadhead heavy enough to keep it low and work it back a hop at a time. Most of my bites come right on the sink or when nearly all the way back under the vessel. That method has ‘flat out’ worked best for me over four decades of fishing for the flat ones.

Top performing boats of the week: The Pacific Queen ran two 1.5 day trips with a total of 65 anglers (32 & 33 respectively) for a total catch of 265 yellowtail, 2 bluefin tuna and 2 yellowfin tuna. The Chief scored well on their only run this past week, a 2.5 day trip wherein 21 anglers put 1 bluefin tuna, 1 yellowfin tuna and 108 yellowtail in the hold. The Pacific Voyager ran two trips this past week; a 3 day outing with 18 anglers aboard and a 2 day run carrying 16 anglers. Total catch for both trips was 11 bluefin tuna, 182 yellowtail, 180 rockfish, 20 calico bass and 64 barracuda.