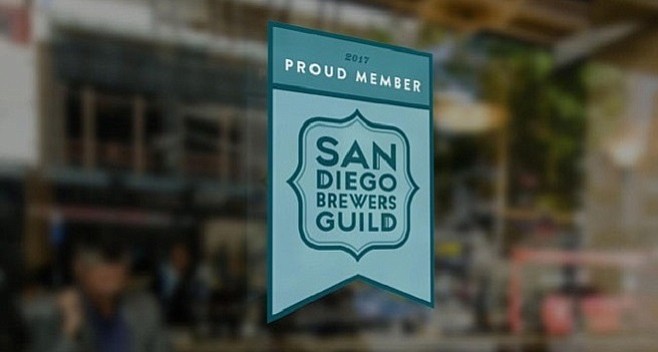 San Diego's independent beer wars started in earnest Memorial Day weekend, as local breweries and their supporters lit up social media and literally took to the skies to voice displeasure about the opening of a big-beer-owned brewpub on #sdbeer turf. 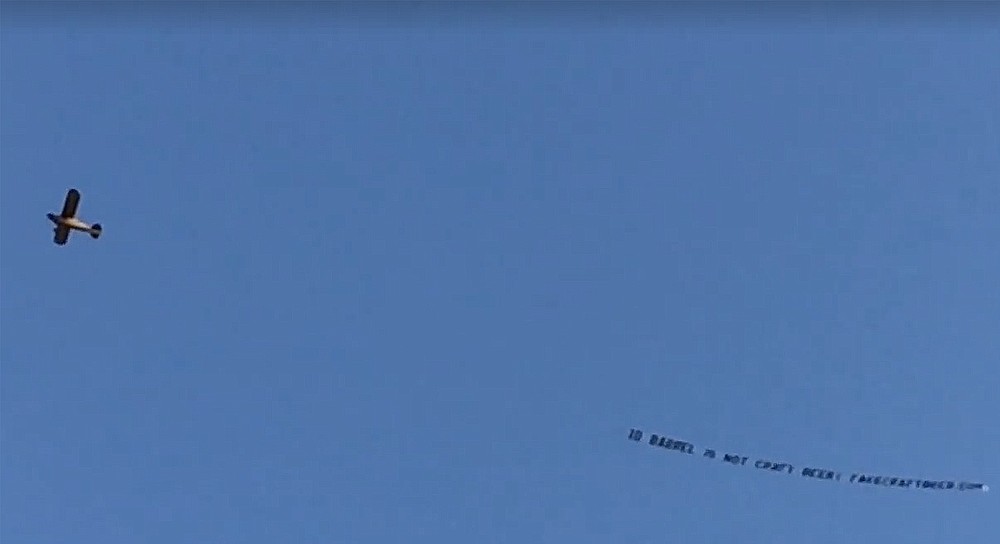 Funded by San Diego brewers and fans, an airplane tows a banner over the opening block party for 10 Barrel's east village brewpub, declaring "10 Barrel is not craft beer!"

In the wake of these public relations skirmishes, the San Diego Brewers Guild has revealed an effort to make it easier for consumers to determine which breweries play for the craft beer home team.

10 Barrel Brewing has hosted a Beer Wars IPA contest annually since 2012. But the Oregon brand, now owned by Anheuser-Busch, faced a different sort of competition as it threw a block party to celebrate the opening of its East Village brewpub on May 27.

The brewpub's Yelp page became an early battleground, with one-star reviews posted days before the opening, recommending other San Diego-owned breweries to visit instead, and prompting Yelp to initiate an Active Cleanup Alert to filter out politically motivated reviews. 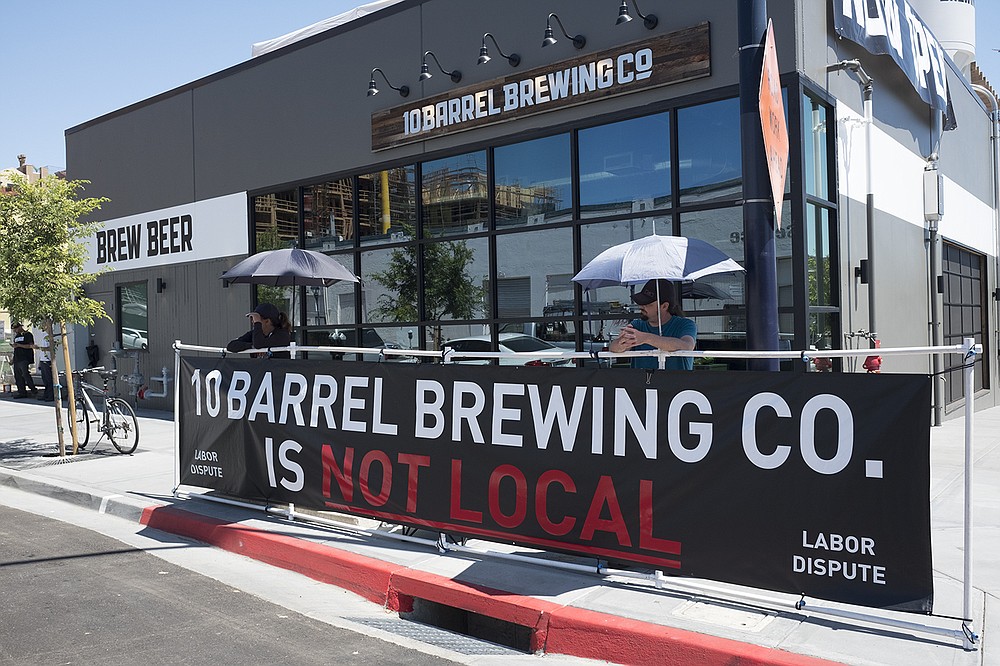 Amid a tide of anti-10 Barrel chatter fomenting in beercentric Facebook groups, a GoFundMe campaign raised nearly $5000 in donations from San Diego brewery founders, employees, and fans to hire an airplane to troll the 10 Barrel opening with an airplane banner reading, "10 Barrel is not craft beer!" and listing the web address: Fakecraftbeer.com.

Drink Local: Why It Matters 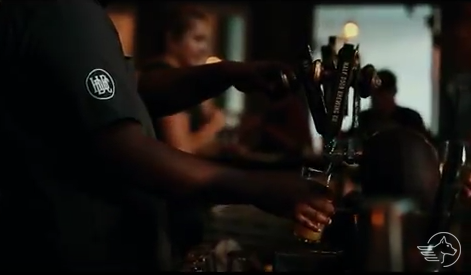 As if to emphasize that point, San Diego's chapter of the Southwest Regional Council of Carpenters union has been picketing the new business since it opened, to decry its hiring of Orange County-based contractors for its multimillion-dollar build-out. 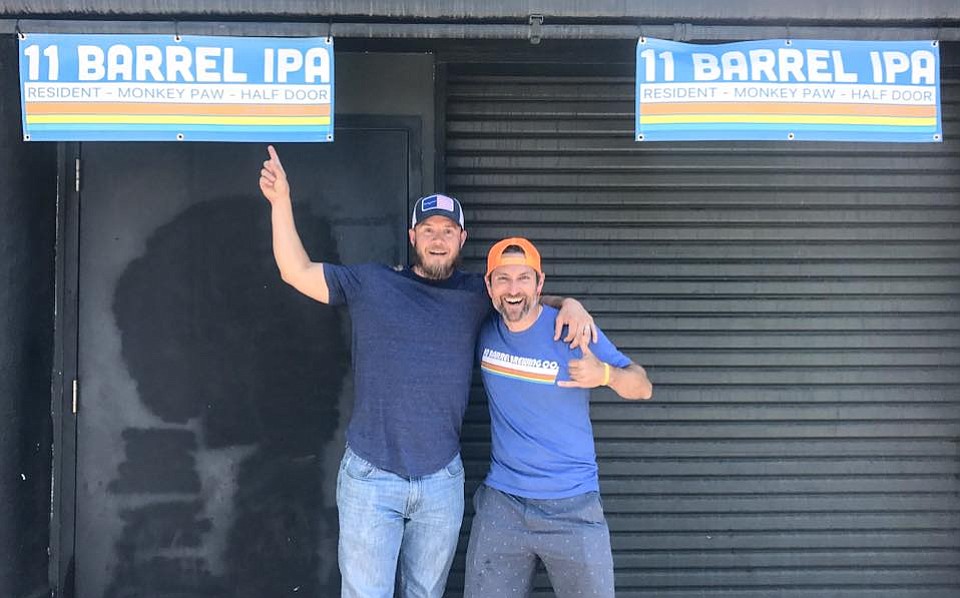 For its part, 10 Barrel has rather gamely responded to many of these challenges. As news outlets covered the airplane banner campaign, its team produced an airplane banner graphic t-shirt reading, "Let's be friends." In a company Facebook photo, cofounder Garrett Wales points out how promotional graphics for the 11 Barrel IPA mimicked 10 Barrel branding, with the caption, "Can't wait to try the beer, friends! Font is a little off though. ;)" 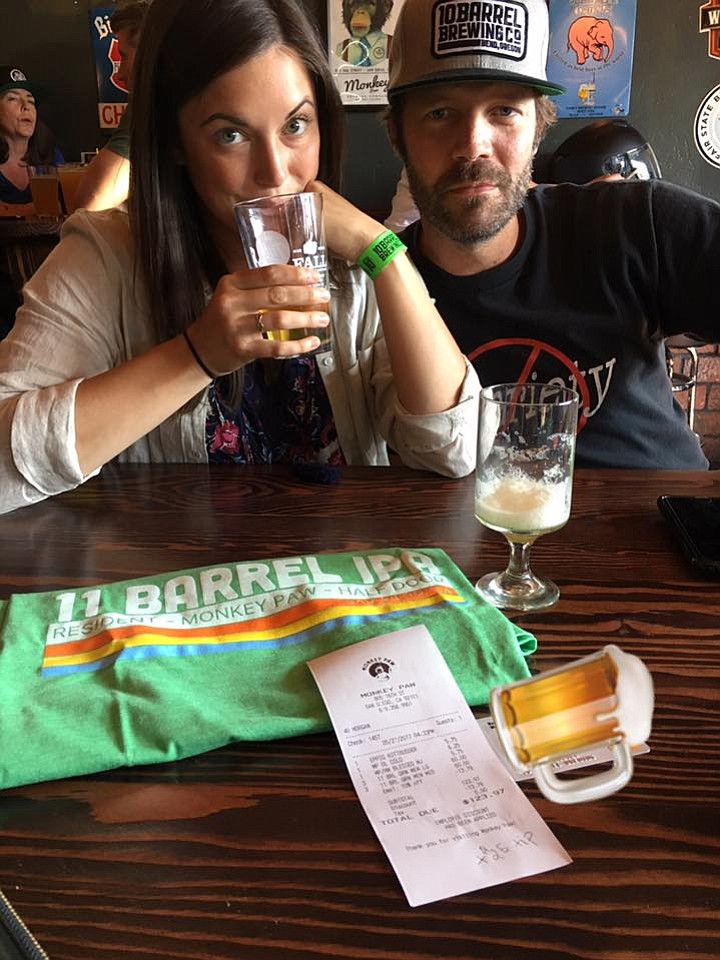 In response to a Facebook-issued challenge, 10 Barrel brewer Ben Shirley patronizes Monkey Paw to buy beer and a t-shirt with a company credit card.

In response to a user challenge in the ensuing comments thread, 10 Barrel San Diego head brewer Ben Shirley was photographed inside Monkey Paw, purchasing an 11 Barrel beer and t-shirt, with what was suggested to be a 10 Barrel company credit card.

Shirley, whose first day brewing on the San Diego brewpub's system took place June 1, says, "It has been interesting to see the amount of time and resources other breweries are putting into talking about 10 Barrel, but I’m just pumped to be able to actually brew some beer now."

Reached for comment about the back and forth, a spokesman for Anheuser-Busch stated, "We’re aware of the responses and incredibly supportive of our partners at 10 Barrel." He added, "They independently decide their actions," and, "We couldn’t agree with their sentiment and approach more."

Back on the San Diego front, local breweries continue to promote their own drink-local values to beer customers. The San Diego Brewers Guild has unveiled what it calls a Conscious Consumer Campaign. It will begin distributing Brewers Guild window decals, flags, and tap danglers to its members to make it clear to beer drinkers when they are drinking locally owned, locally produced beer.

Speaking on the need for such distinctions, Brewers Guild president Jill Davidson said, "With the growing number of mergers and acquisitions, it is becoming more challenging than ever to differentiate between independently owned craft brands and those that are owned by international megaconglomerates. The consumer deserves to have the information necessary to make the conscious choice of who they support with their hard-earned dollars," in order to "make the informed decision of where the dollars are going to ultimately end up."

So, when does a highly successful micro-/craft-brewer cease to be indie? I'm all for this movement to take beer back from the multinationals. But we now have Ballast Point, no longer locally owned, and Stone, that are pumping out quantities of brew that once were considered highly respectable for big beer's plants. So, are Ballast Point and Stone still in the fold, or are they part of big beer now? I'd say it's the latter.

We had the recent controversy about the identity of Blue Moon, and whether it was anything other than a big beer masquerading as something like craft or micro brew. If you like the slop, drink it and don't worry about what it is.

Teh entire conundrum here is that the successful micro- or craft-brewery is no longer "micro" or really "craft." Independent or not, it's not what an indie brewery stands for. As soon as it sells out, as with Ballast Point, it is, if not big beer, very close to it. Gets hard to sort out, doesn't it?

I think there are a few differences between 10 Barrel coming in and Stone/Ballast Point. The first being that Stone and Ballast Point were originally created in San Diego.

The second is that Anheuser-Busch practices some shady marketing. As noted in an old San Diego Reader article, Anheuser-Busch was recently fined $400,000 for using illegal tactics to entice beer retailers to buy its beer.

To many, this appears to be a large corporation coming into a city under the guise of 'craft beer' in hopes to capitalize on a proven market. They don't care about the beer culture that has been cultivated in San Diego, they only wish to profit off of it. That's my issue with them.

Of course, Anheuser-Busch is owned by brewing giant InBev, which doesn't like the craft breweries luring away their customers.

Neither Ballast Point nor Saint Archer are members of the SD Brewers Guid since their respective sales, so they will not receive the window decals.

It's so nice to see local companies (including breweries) banning together to fight big beer!