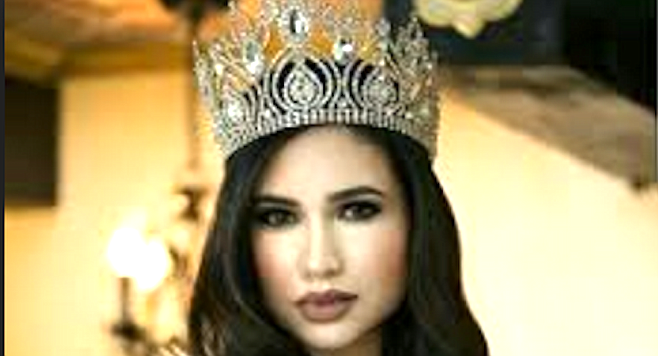 The $2,000 oversized check Zhala Tawfiq received upon being crowned Miss Middle East was not a real check. The accompanying cosmetic procedures, sponsorships, wardrobe, and television auditions, that accompanied the check, were just as fake, part of a fraud that the pageant owner, and El Cajon city councilmember, Ben Kalasho perpetrated, says Tawfiq in a May 31 lawsuit. 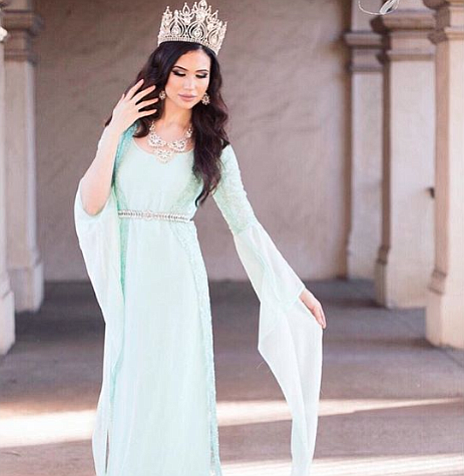 To make matters worse, claims Tawfiq, shortly after confronting Kalasho she discovered a fake Instagram account which featured falsified nude photos of her.

Tawfiq is suing the East County businessman and politician for general and punitive damages stemming from emotional stress, defamation of her character, and for committing a fraud.

Kalasho founded The Middle East Beauty Pageant in 2013, according to its website, "to serve as a platform for up and coming Middle Eastern women in the United States." The pageant, adds the website, allows "contestants the opportunities to spread their intelligence, talents, beauty, and culture."

"The empowerment of women has been a long standing goal of mine since my early teens," reads Kalasho's bio posted to the pageant's website. "We are so behind the rest of the world that when we talk about women's rights we are referring to basic human rights. The freedom to wear what you want, marry who you want, vote, drive and have equal standings in court and community. It's my life's mission to achieve these things for Middle Eastern women, everywhere."

But Tawfiq says her right to the prize money she won were broken shortly after walking off the stage of the Cortez Ballroom inside the Mission Valley Hilton on May 19, 2016.

Instead, the $2,000 check was more employment contract than a prize, payable after fulfilling certain contractual obligations such as promoting the pageant on social media websites as well as in person. According to the lawsuit Kalasho also required full access to her Facebook and Instagram account to further promote the pageant.

Tawfiq complained about the unfulfilled promises to Kalasho in March of this year. One month later, according to the lawsuit, Tawfiq discovered a fake Instagram account called, "Zhala_Tawfiq_Fanpage." On it were photos of Tawfiq's head superimposed on a nude model's body. Accompanying the photos was a tagline that read, "Leaked images of Miss Middle East Beauty Queen."

The following month Kalasho informed Tawfiq that he was stripping her of her crown for contractual failures.

The lawsuit questions the legitimacy of The Miss Middle East Pageant.

"The pageant, a registered non-profit, ostensibly runs the event for charity, obtains sponsors, and sells tickets to the event. No individual charity is identified as a beneficiary of the event on either the pageant's website, social media platforms nor related literature...The pageant also obtains sponsorships ostensibly to pay for the various awards promised to the winning contestants. The pageant additionally requires each contestant to pay $50 for entry."

Kalasho, who learned about the lawsuit on June 4, was unable to comment on specifics, stating that his organization "conducts the pageant just like any other pageant. We have a contract and if the contract isn't honored then the crown is given to the runner-up."

Added Kalasho, "we have not had any issue with any previous winners, contestants, or vendors."

Tawfiq's attorney says otherwise. "Ms. Tawfiq looks forward to presenting evidence of wrongdoing on the part of the Miss Middle East Beauty Pageant and councilmen Kalasho in open court," writes attorney Jimmie Davis Parker in a June 5 statement. "Suffice it to say that this matter goes far beyond a mere contractual dispute. The defendants engaged in abhorrent and retaliatory conduct including the dissemination on social media of falsified nude images purporting to depict Ms. Tawfiq, resulting in severe mental anguish and damage to Ms. Tawfiq’s reputation. The Miss Middle East Beauty Pageant and councilmen Kalasho sought to gain an advantage in their contractual dispute by using abusive, underhanded tactics and mud-slinging; this is not the first time they have so engaged. The citizens of El Cajon deserve better, and Ms. Tawfiq endeavors to protect herself, as well as other members of the community from any further abuses perpetrated by the defendants."

As the case moves forward in court, the 2017 Miss Middle East Pageant is set to be held on June 29 at the San Diego Marriott in La Jolla. According to an event posting in the Reader, the pageant will be a "red carpet, formal event that will be televised."

During a June 7 meeting, Kalasho dismisses the lawsuit as a publicity stunt by Tawfiq. He produced copies of a May 22, 2016 contract which Tawfiq signed three days after the pageant. Under the terms of the contract, the Chaldean Chamber of Commerce and the Miss Middle East Pageant, both founded by Kalasho, were required to pay Tawfiq three installments of $666 in a year’s time. In exchange, Tawfiq was required to sell tickets to the Chaldean Chamber of Commerce annual masquerade party as well as five tickets to the 2017 Miss Middle East Pageant. In addition the contract required Tawfiq to appear at five Chaldean Chamber events and post messages approved by Kalasho or his wife, and pageant coordinator, Jessica Kalasho, on social media websites.

“If one or more requirements are not met in a timely manner decided by the Miss Middle East Pageant Committee and Chaldean Chamber Board of Directors then a forfeiture of prize money will be initiated,” reads the May 2016 contract.

In addition to providing the contract Kalasho produced two checks issued to Tawfiq, one on May 31, 2016 and the other in November of the same year.

"While it is an unfortunate circumstance, Tawfiqs allegations are easily disproved and we too look forward to exposing her allegations at trial,” Kalasho said in a prepared statement. "As the founder and president of the largest ethnic pageant in the world, we take pride in following all the legal necessary steps of executing binding contracts. We will protect our brand and reputation at all costs and will not yield to publicity stunts and erroneous allegations."

As for the allegations that the Miss Middle East Pageant has violated the rules governing charities and non-profits, Kalasho says until this year the pageant was privately owned, by he and his wife, and this is the first year they have filed as a non-profit.

I hope she gets the jerk. I'll bet he holds inspections while the women are dressing, just like Trump.

Disgraceful, I hope she gets what she deserves.

Gee a slimy politician running a scam. Who knew?

Ginger, are you really that naïve? While so-called non profits do have volunteers working them, they also have others who call the shots running the show. They skim off huge fees/wages for themselves right off the top, thus making it a "non-profit".

While these entities always claim to benefit a community, project, or charity what the really do is enrich the organizer who runs it.

Did this guy attend the infamous Trump University?!?!

Graduated top of the class.

You know this all could be cleared up quickly. The Reader, or should I say Dorian, the author of this piece, could just get the IRS 990 form for this "non-profit".

But here's a clue as to the this groups reputableness; from its own website, About Legal Page, the very first sentence under disclaimers reads...

"Disclaimers Miss Middle East Beauty Pageant USA does not guarantee the accuracy of any content on this website or any websites linked to by this website."

When this is the first statement in a disclaimer ....hold on to your wallet. Heck, even it website claims its address, 1620 Cliffdale Rd is in San Diego when it's really El Cajon. But they left off the zipcode of 92020, a dead giveaway. Guess that's why the disclaimer statement is there.

JustWondering...probably isn't much in the 990 since they just started holding the pagent as a "nonprofit" this year.

My point, does an IRS 990 filing even exist? If this pageant is just a money grab, then typically no one bothers to follow the law. Is this alone dispositive? No, just another indicator, one way or the other of the veracity of those running the show.

Well, he posted and deleted this on his Facebook page. True colors. Ironic his event was held at the Marriott in LA JOLLA. His ‘sponsors’ might want to rethink who they’re supporting. 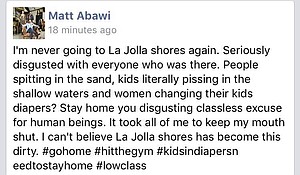