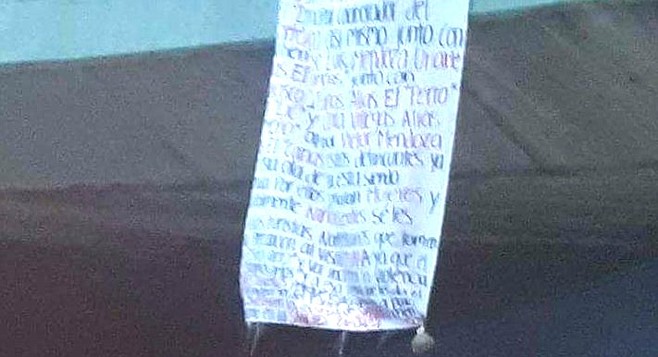 When blankets are inscribed with messages and flung over bridges in Tijuana, they usually boast a narco-warning directed at rival cartels or authorities. Such narcomantas, as they’re called in spanish, are appearing increasingly throughout Tijuana.

The most recent featured not a narco-message, but, rather, a message asking U.S. authorities for support and warning North American tourists who visit the border town to be careful.

Violence in Tijuana has left more than 600 dead year-to-date. The blanket accuses one cartel in particular of committing most of the violence.

“We request the United States government to support efforts to stop the wave of violence in Tijuana, which has been successful because of the Mexican government’s inaction,” reads the blanket. “Since this wave of violence generated by [Sinaloa] has killed women and innocent children, we advise North American tourists to take caution when visiting Tijuana.”

The blanket appeared on a vehicle bridge near the San Ysidro border at the end of May. The blanket denounced the leaders of Tijuana, and requested U.S. authorities to help “stop the wave of violence in Tijuana.” It contended that Tijuana authorities have failed to apprehend known narcos, proving the incompetence of the authorities.

The Municipal Police promptly took down the blanket. According to the coordinator of the Sub-Attorney Against Organized Crime, Miguel Angel Guerrero Castro, approximately 15 narcomantas have appeared in different areas of Tijuana so far in 2017. In mid-May, two appeared with warnings directed at state police.

A protest held June 4 by the Citizen Unification Movement demanded that state and municipal government do something to stop the violence, which includes robberies, rapes, and homicides. “Enough of the impunity” and “Justice” were the protest’s slogans. One sign held by a young child read, “Yo quiero vivir sin miedo” - (English: I want to live without fear).

In late May, the Citizen Security Council, a group composed of concerned citizens, gave the new administration of Juan Manuel Gastélum 90 days to curb the crime.

"The new municipal administration has just come in,” said the president of the Business Coordinating Council, Kurt Honold. “We have to give them time to do their job. We see that Marco Antonio Sotomayor (Tijuana secretary of security) is doing his work.”

Enrique Martinez, commander of Tijuana’s military zone, has said that the National Security Council will deploy to Baja California at the request of the state government. Locals find this welcome news, as the municipal police recently fired many officers who failed to pass honor qualifications.

The Tijuana paper Zeta summarized the situation in regards to the violence in late April: “Executions like never before in Baja California,” the paper headlined.