Locals told "they don’t need to experience it" 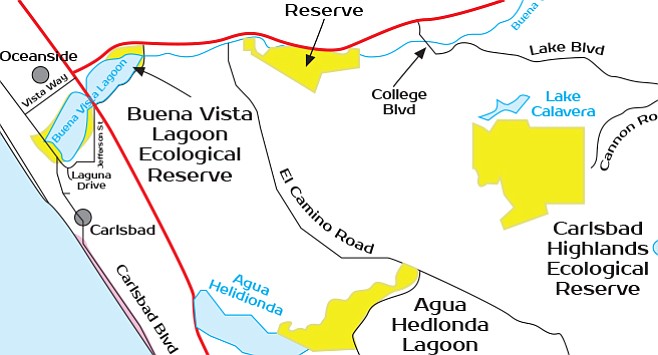 Retired firefighter Rick Minnick has been riding and hiking the trails in the open space near Carlsbad’s Lake Calavera for about 25 years now. In the early days, Minnick and his buddies were able to connect these trails to areas such as La Costa and the Kelly Ranch that had similar wild trails. 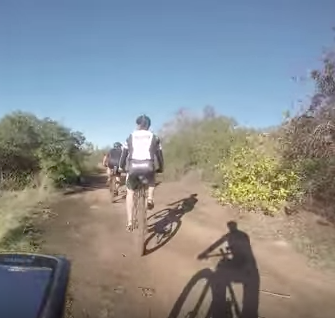 As the years passed, the open space in the region was overrun by development, drastically narrowing the scope of Minnick’s playground. These days, the vast network of trails south of Lake Calavera is the only out-the-back-door-on-his-mountain-bike option that remains at his disposal.

It appears as if this option may soon disappear.

“The City of Carlsbad just recently installed a bathroom by the dam, which was well-received,” Minnick said. “But that’s only in that one relatively small area, and then the rest of it is apparently all illegal. We’ve been riding out there for 20-plus years, but recently they just put up a bunch of Trail Closed signs. Not the City of Carlsbad, but I think it was the Fish and Wildlife folks from California.”

Lake Calavera. Residents who use the reserve's trails to walk a dog or go for a jog may be shut out or issued a citation.

The California Department of Fish and Wildlife has owned 473 acres of this open space since 2000. The City of Carlsbad owns a smaller portion of the property (110 acres) that is north of the Fish and Wildlife land. Even though most hikers and bikers refer to the entire area, in general, as Calaveras, the property that Fish and Wildlife purchased is officially referred to as The Carlsbad Highlands Ecological Reserve. It has apparently been illegal to bike on this property for decades. There are two legal trails for hiking on the entire property.

The most interesting wrinkle to this story is how few local bikers realized most of the Calaveras region area was off-limits. A bigger bombshell — one that could affect a massive portion of the neighboring residents — is that there are only two legal hiking trails on the property. This means that residents who use the reserve's trails to walk a dog or go for a jog may be shut out or issued a citation. The legal trails apparently aren’t marked well. Even Minnick, a local for years, could only guess that one was a double-track semi-wide trail and the other similar to a fire road.

If they do start to issue citations, the fine will be $250 max, according to Fish and Wildlife environmental program manager Richard Burg. Via email, Burg reiterated that, “Mountain biking is an unauthorized activity on the reserve (per state law) and has been for over 30 years” and that, “the Department is looking into opening up additional trails for hikers in the future.”

The mission statement of the Fish and Wildlife is “to manage California's diverse fish, wildlife, and plant resources, and the habitats upon which they depend, for their ecological values and for their use and enjoyment by the public.” Ben Stone, vice president of the San Diego Mountain Biking Association, inquired about the “use and enjoyment by the public” portion of that statement at a recent meeting he had with Fish and Wildlife.

He continued: “For most land managers we deal with in California, recreation is not primary. It’s often not even secondary or on the top of the list. But when you live around 3.3 million people, recreation is going to find its way in. There’s gotta be some level of reasonable access. And you can’t have the community that surrounds your open space hate you.”

This new community vs. Fish and Wildlife conflict has already piqued the interest of two local politicians. California Assemblyman Rocky Chavez and Senator Pat Bates have opened cases regarding the situation. Bates issued this statement: “I support a balanced approach that allows people to enjoy the benefits of open spaces such as the Carlsbad Highlands Ecological Reserve. It is my hope that outdoor enthusiasts and the California Department of Fish and Wildlife can come to a consensus that ensures safe access for people and protects the natural environment.”

They stopped us from fishing there years ago.

The City of Carlsbad owns the lake, as it were and is in charge of that, and fishing hasn't been allowed for years. It's just that nobody listens to the ranger when he tells people that. The Center for Natural Land management is the outfit the manages the Calavera preserve itself.

While CDFW should adopt some trail: The amount of building by mountain bikers out there has been completely out of control for years. If you do not believe me take a stroll out there and see the honeycomb of trails that has been constructed by MTBR's (Lets be honest about who has done the work).

Surfer, you can bet that we pioneered these trails and many others in the county on dirtbikes in the 60s and 70s, and they took them from us, and gave them to bicyclists. Now it's your turn. See you in the desert.

I've hiked in that area for several years. The boundaries between the various jurisdictions were never clear. The Rancho Buena Vista High cross country coach used to have his runners practice on the hills there. But I never really cared for the place. That chalky soil that turns to something like grease when wet and the massive amount of erosion were always turn-offs. Trails go everywhere, and frankly the area looked abused. But since I have no dog in the fight, I won't take sides. The area could use some TLC for sure. I don't know that DFW is the agency to actually do the needed things.

I'm doubting DFG will actually bite considering their weak to nonexistent effort the past decade as they let the native inhabitants get squeezed out. The graphic below (https://drive.google.com/open?id=0B2a9tZ-0i0eLSklPNXZQVE9odm8) shows the proliferation of trails, which started around 2008. It hasn't stopped, but it appears to have tapered off after DFG put laughable signs and fences up around 2011. 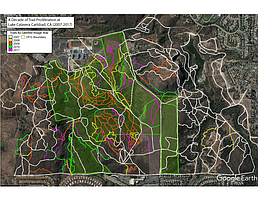 The Proliferation of Trails at Calavera Preserve by ErikMM