This could be a thing, except for the donut itself 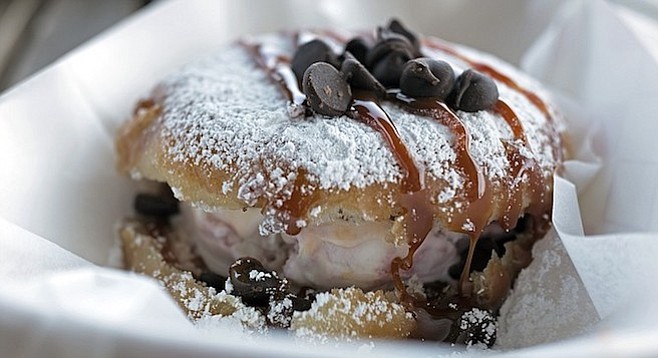 I’ve got to hand it to Coronado Spice & Tea. When I spotted the sign saying, “Try our ice cream puffs,” I took notice. I didn’t know what they were, but I guessed that they would go down easy on a hot summer day. 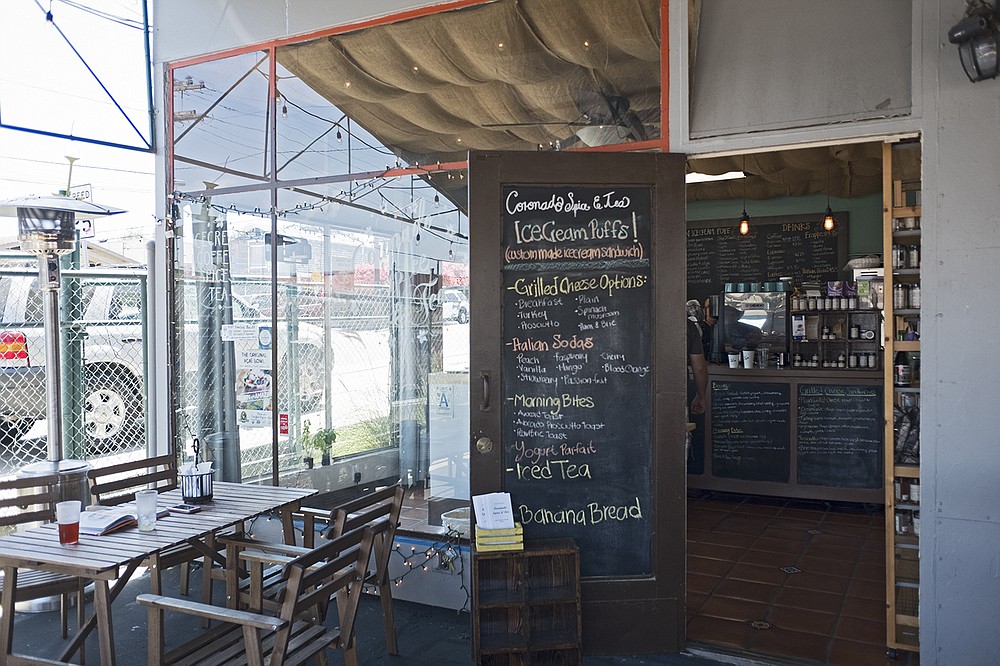 The ice cream puff proved very sweet, and the end result depends a lot on your choice of toppings

Despite the name, this little shop isn’t in Coronado, but North Park — part of the small business district along Thorn Street. They do sell both tea and spices as well as Italian sodas, grilled-cheese sandwiches, parfaits, açaí bowls, and flavored coffee drinks.

Turns out the ice cream puffs are custom ice cream sandwiches made with your choice of cookies, donuts, or cinnamon rolls. That would be the first of several deliberations.

My friend went with a cinnamon roll, so I decided to stick to the plain ol’ glazed donut. The cinnamon roll turned out the be glazed as well, but the donut also had a heavy dusting of confectioner’s sugar.

Ice cream flavors range from standards such as chocolate and vanilla bean to banana walnut. The shop says its ice cream is locally made, from shops such as Normal Heights’ Mariposa Ice Cream. I went for white-chocolate raspberry.

The next call was toppings. Each ice cream puff comes with two free toppings from a list including nuts, sweet sauces, breakfast cereals, M&Ms, and pretzels. I went back and forth on this for a few minutes. Fortunately, the family behind me in line also didn’t know what they wanted. I settled on chocolate chips and cajeta, a sweet, Mexican caramel sauce, sort of a goat’s milk dulce de leche.

Presentation turned out well — a light drizzle of cajeta striped the top of the sugary donut, with chocolate chips on top of that. To the surprise on no one, the ice cream puff proved very sweet, and the end result depends heavily on your ability to mix and match toppings. I think next time I’d go with the pretzel topping to add a little salt to the mix.

Also, like another donut ice cream sandwich I recently tried, the biggest weakness was the donut itself. The glaze was gritty, and the dough texture was like that of a stale croissant. My friend reported the cinnamon roll had similar issues.

I can think of a few local donut shops that could help Coronado Spice & Tea overcome this shortcoming. That would be great, because while I didn’t think it was perfect sweet treat, the ice cream puffs were good enough to convince me that they should be a thing.

Such a great click to know about ice cream