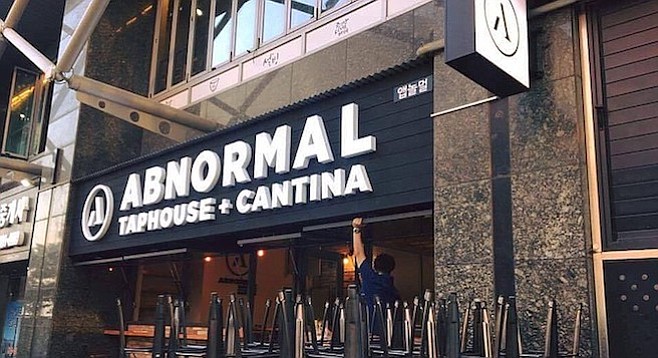 If it sounds like a concept that might suit our local market, that's no accident. "We feel the location is very similar to here in San Diego," says Abnormal cofounder Matt DeLoach. He explains the business sprung out of a relationship with Tilt Imports, which began bringing Abnormal Beer to Korea last August. While DeLoach acknowledges he and his partners had discussed ways to expand distribution, they didn't expect it to lead to opening an international location.

Tilt founder Andrew Frank — an American entrepreneur who also owns a bar in South Korea — originally brought the Haeundae location to Abnormal's attention and partnered with the brand to open it. "[Frank] brought up the opportunity of a location in Busan, right on the beach," DeLoach recounts. "It was a series of opportunities we felt was too good to pass up, and we decided to follow the rabbit down the hole."

The Cantina's taco menu was devised by Abnormal's restaurant partner in Rancho Bernardo, the Cork and Craft, and factors Abnormal beer as an ingredient in each recipe, including a fried-fish taco with the brand's Jolly Good English style pale ale beer batter. That beer is served along with select Korean and American craft beer guest taps and Abnormal's other core selections: Mocha Stout, 5pm Session IPA, and Boss Pour IPA.

According to warehouse manager Jeff Milton — who joined DeLoach and cofounder Elvin Lai in pouring Abnormal beers at Seoul's Great Korean Beer Festival in April — the latter has been the brand's best performer in South Korea. "They really love our Boss Pour IPA out there," he says. "They don't have access to a lot of really good IPAs, so that's definitely one they're big fans of."

Milton says that, in addition to the new Cantina, Abnormal distributes to a dozen other Korean bars and counting. The brewery has already sent two 20-foot, refrigerated shipping containers out there, and he expects it will send three or four a year if demand continues to grow.

Meanwhile, back home, Abnormal has just powered up a new 10,000-square-foot cold-storage facility, which will give it more space to grow its barrel program and expand local distribution. DeLoach notes the space is currently larger than Abnormal needs, so the brewery's offering storage to other growing companies. "We can offer that resource to other breweries," he says, "and give back to the brewing community here in San Diego."

However, if the new taphouse in South Korea goes well, further international locations could follow for Abnormal. But first, it will implement onsite canning at the Cantina. "Kind of like a crowler," DeLoach says, "allowing people to take beer offsite and drink on the beach."

Because in Haeundae, beer fans can still drink from cans on the beach.