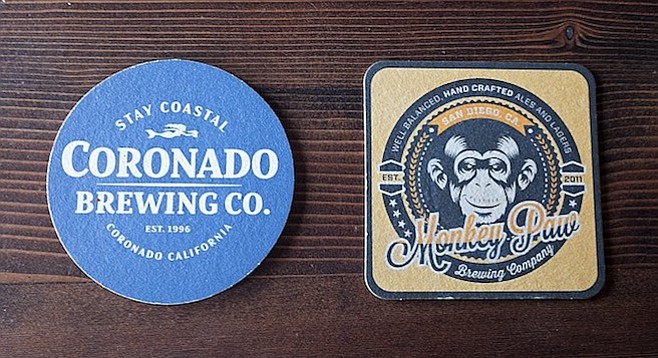 “Scot Blair has created a brand with a lot of momentum, and we don’t want to mess with that too much,” said Coronado COO Brandon Richards in the press release, “The pub will continue to operate as-is, and we’re looking at releasing new cans in the near future.”

Coronado marketing director Melody Crisp notes that Coronado will initially work to increase Monkey Paw's local distribution, then eventually factor in out-of-state accounts, saying, "We want to grow the brand organically, with draft first." She adds that public reception will determine which Monkey Paw beers make it into cans, sometime in 2018, but that, "We hope we can share crowd-favorites like Bonobos, Sweet Georgia Brown, and Oatmeal Pale."

Monkey Paw will become the second independent brand to be produced at the Knoxville brewery, following May's announcement that former Coronado brewmaster Ryan Brooks will launch his SouthNorte Beer Co. from there.

While today's announcement notes that "many regional breweries are experiencing declining sales" in the current craft beer market, Crisp says that is not the case for Coronado, which continues to see a rise in its own brand's sales.

Scot Blair, who has been outspoken in his opposition to big beer encroaching upon San Diego's independent beer market, said he's been exploring ways to grow Monkey Paw for the past two years, without pursuing traditional financing routes available to breweries, such as taking on investors or bank loans.

However, after watching the acquisition of Alpine Beer Co. by Green Flash Brewing in 2014 benefit both parties, striking a similar deal with mid-size Coronado looked like a winning alternative. "It's absolutely no different than any conventional mechanism, except I know the people," Blair says, noting he's maintained a long relationship with Coronado's ownership and employees, and trusts both their organization and its leadership with a Monkey Paw brand refresh, and improvements to efficiency. "I've known them for 11 years," he says, "I've watched the maturation and the growth of what they're doing, and I've been impressed the whole way."

Monkey Paw has brewed roughly 600 barrels per year in East Village, affording only limited distribution outside its own brewpub. Blair anticipates annual production volume to grow by 400 to 500 percent at Knoxville, without enduring the growing pains of doing it on his own.

Neither of Blair's other beer properties, Hamilton's Tavern and South Park Brewing Co., will be impacted by the Monkey Paw merger.