Be wary of pretty food, make-up, and beards

Seafood worth a trip south of the border 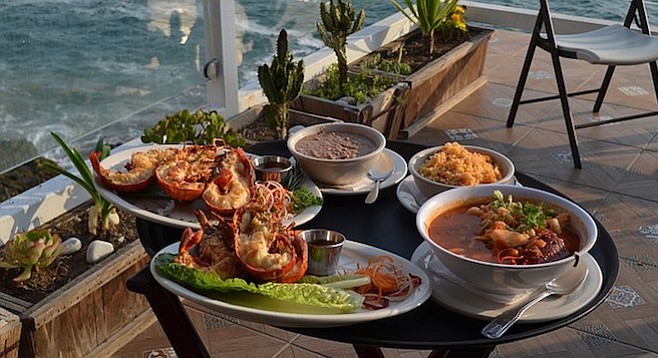 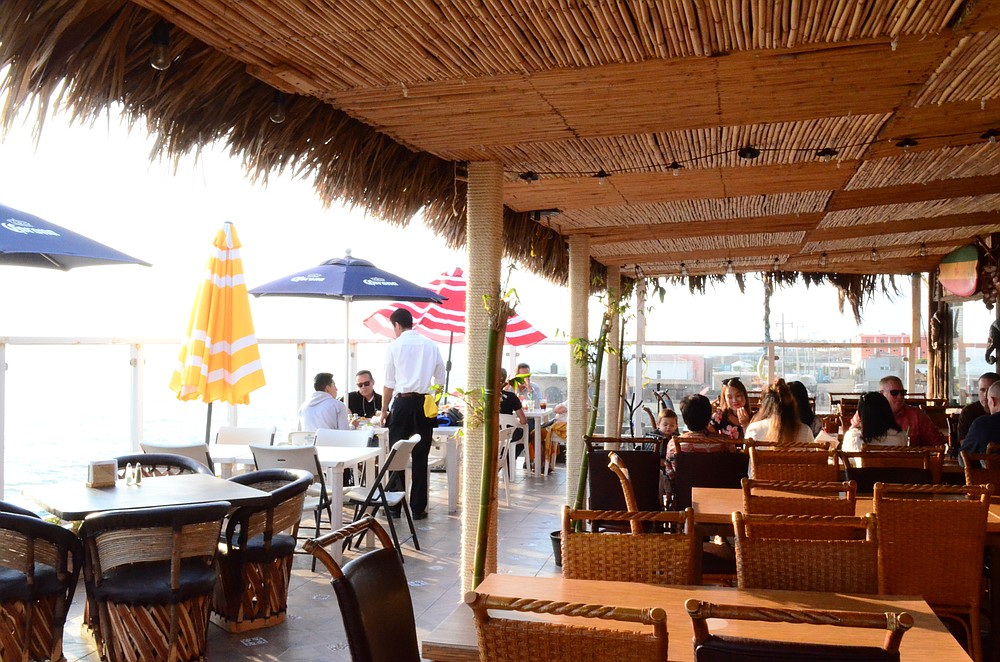 The cuota is great if you’ve got someplace to be. The libre is your best bet for a chill afternoon. And then you arrive here.

A buddy of mine, Rosarito born and bred, asks if I’d heard of a joint called Splash. He says if I want a good ride down the coast and seafood that’s hard to beat, I should cruise the free road a little past Puerto Nuevo and give it a shot. “How far past?” I ask. “You’ll see it.” Directions are never too precise here.

So under the warm sun of a Saturday afternoon I fire up the Harley and set out. If you’re not familiar, there are two ways to travel south in Baja — the libre and the cuota (literally, “free” and “toll”). The cuota is great if you’ve got someplace to be and nothing to see in between. But the libre is the best bet for a chill afternoon. 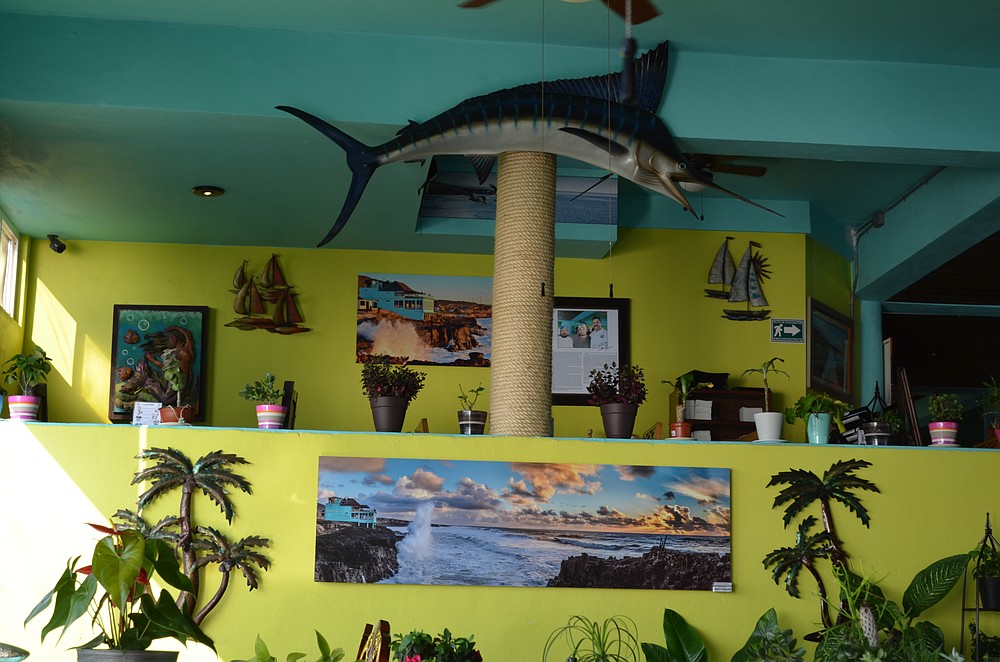 The southernmost bit of Rosarito is congested with businesses, restaurants, and condos. But once you hit Baja Studios — the popular filming location of Titanic, Pirates of the Caribbean, and, presently, Fear of the Walking Dead — commerce becomes sparse and the majestic, rugged coast of Baja comes into full bloom. Living in San Diego, I often forgot the privilege of having another country no more than an hour away. 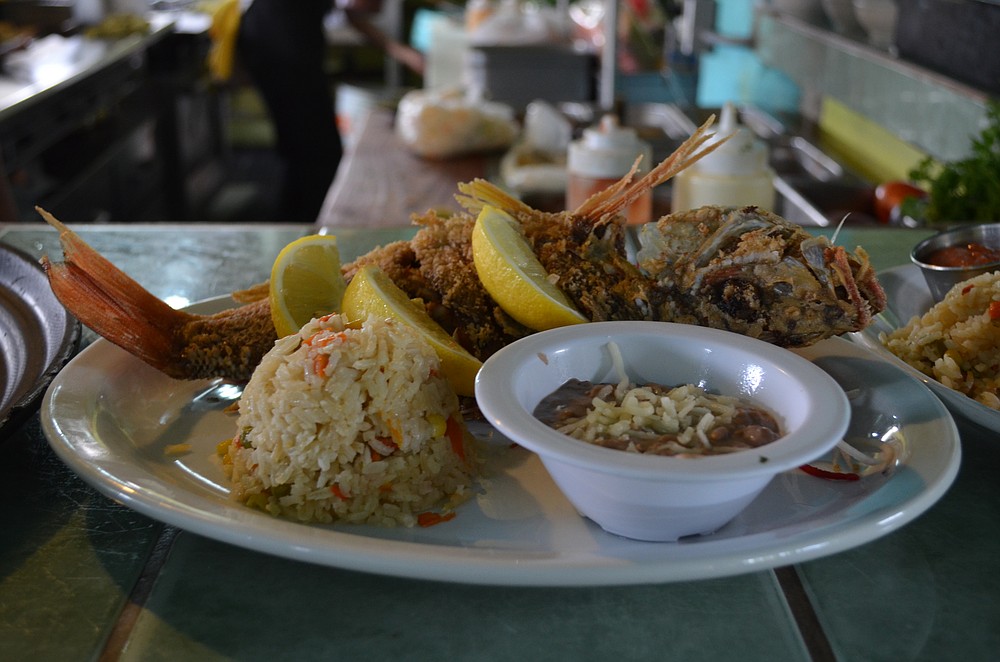 The popular red snapper dish with rice and beans

The road south is spotted with decorative metal works, woodwork, and caches of fireworks. Just past surfers shredding at K-38, tourists vying for parking at Puerto Nuevo let me know I’m getting close. As I lean into a tight curve at K-52 the restaurant’s weathered, dark-blue sign comes into view. I pull into the dirt lot where an older gentleman is washing cars, two women are chatting behind tables stacked with ponchos, blankets, and other wares, and two dogs are napping, hiding from the heat of the sun.

The entryway to the restaurant is a bit awkward — a sliding glass door leading into a dimly lit and narrow corridor right beside the kitchen — but sunlight draws me forward and down a few stairs into the brightly decorated dining area surrounded by floor to ceiling windows on three sides. A robust “Bienvenido, primo!” greets me from behind the horseshoe bar, and I belly up near the windows that waves crash against in the winter months. And here I was hoping Splash was an homage to a young Tom Hanks.

The three bartenders stop to introduce themselves, and one, sharing my name, calls me by the nickname tocayo (meaning namesake) before pouring my drink. As I peruse the menu of steaks, seafood, and burgers, a blond woman to my left recommends the filete de mero con mantequilla ajo (black sea bass with garlic butter). Marie — an import from the Republic of Ireland — tells me it’s the most popular dish, and I’m lucky Agapo is in the kitchen today. Tequila in hand and jovial conversation afoot, I heed Marie’s suggestion and also decide to whet my appetite with a small bowl of lobster bisque. It’s one menu item I can never pass on.

I’m particular when it comes to bisque, but this hits the mark. Perfectly balanced flavors of cream, sherry, and lobster were accompanied by two warm pieces of homemade, salty-sweet flatbread. Marie takes one look and decides she needs a bowl as well. As we eat, Marie tells me she’s been coming for Agapo’s grub since before the restaurant moved to this location two years ago and sings its praises. Being a critic, I suggest the bisque would be perfect if they added chunks of lobster. Marie agrees and says she’ll put in a good word.

Soon after, 16 ounces of black sea bass arrived accompanied by traditional beans and rice, warm, fresh tortillas, and enough freshly whipped butter to give the tortillas a proper drowning. I tend to be wary of pretty food in the way I’m wary of makeup and beards — I know they’re hiding something. But as the first bite of delicate meat melted in my mouth, I put my apprehensions at bay. It was that good.

Marie says she’s got to be going as I take inventory of the meal I’m now too full to finish. We say our goodbyes, and Tocayo pours me another tequila. He says live music will start upstairs in a few minutes. It stings a little to pay six dollars for a glass of commonplace tequila south of the border, but I imagine the place would go bankrupt otherwise, considering the meal was only 15 bucks.

I head up to the thatch-roof patio that hangs over the rocky shore and take in the ballet of sea spray dancing up and down the jagged coast. As I watch the bright orange sun slip into the deep blue expanse I think, I can’t imagine a better place to drop 25 bucks on a Saturday. Doesn’t mean I won’t try, but like we say in Baja, eso es para mañana.