"There are so many breweries people don't know about." 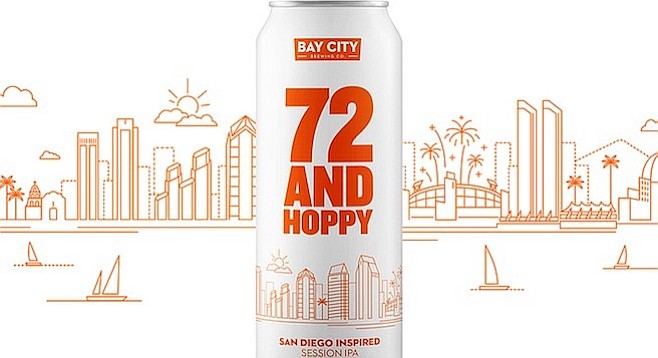 "We're the first destination to do anything like this," says Tourism Authority director of communications Candice Eley, "and really the goal is to have some fun with our reputation as the craft-beer capital of America."

The beer, named 72 and Hoppy, is a session IPA — designed to deliver the hop-forward character San Diego beers are best known for, with a low, 4.2 percent alcohol content, so it will prove more accessible to tourists and casual beer drinkers.

"We wanted to create something that was kind of a starting point for craft-beer drinkers," says Bay City cofounder Greg Anderson, "an introduction of sorts to all the great things we do in San Diego."

Eley says the Tourism Authority initially conceived of the beer as part of an ongoing effort to promote San Diego beer tourism. "We've been working with the craft-beer community for the past several years to find creative ways to elevate San Diego as a beer destination," she says, noting the organization has sent bottled samples of the beer to trade shows and clients in other cities and countries.

The San Diego Tourism Authority is supported by the membership fees of 90 local businesses, including hotels, art galleries, and attractions such as SeaWorld. Since opening two years ago, Bay City is one of only a few breweries to independently join.

"We figured they'd be a great asset for us," says Anderson, adding that the two organizations have previously worked together to promote events, including a Spanish-language brewery tour.

Bay City's existing relationship with the Tourism Authority contributed to its being invited to produce San Diego's first official beer, as opposed to one of the larger, better-known breweries credited with establishing San Diego's beer reputation, such as AleSmith, Karl Strauss, or Stone Brewing. However, Eley says out another factor worked in its favor.

"We actually really liked the idea of going with a smaller, newer brewery," she says, mentioning that the bulk of independent breweries contributing to San Diego's vibrant beer community operate on a much-smaller scale. "There are so many breweries people don't know about. We think it's a great idea to highlight a smaller one."

Bay City will celebrate its two-year anniversary in August, and by the end of summer 72 and Hoppy will become the brewery's first canned release. However, Anderson says the company just purchased a bottling line and will also begin issuing its San Diego pale ale and Vienna lager for local distribution.

Trying to pick an official beer is a sure formula for conflict and much unhappiness. This choice sounds like a rather bland sort of brew, but then who can predict tastes in beer? It may be well received, or may be treated as something for tourists whose liking for beer is limited to mass-produced light beers from the Big Beer behemoths.

As for Stone and a few others locally that are no longer micro- or craft-breweries, they should be on the sidelines. Personally I don't care for much of anything that comes out of Stone, and the current overemphasis on IPAs in their many variations is a turn off.

So now the city is giving preferential treatment to one random small brewery, attempting to boost their sales above others? Sounds fishy. Also sounds like another poorly conceived idea, with no long term plan behind it. San Diego should be Beer Capital of the USA - this isn't how to get there.