BLVD's small plates and the blues 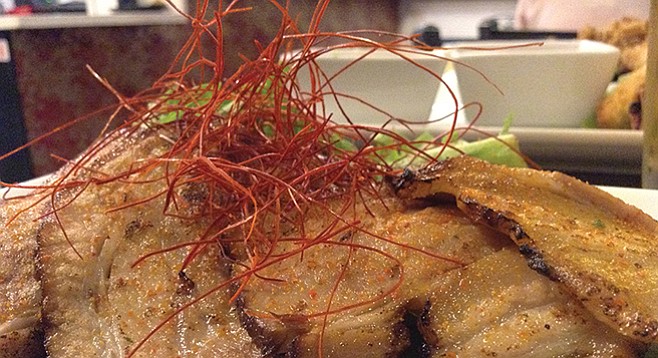 La Mesa on a Sunday night? Looks deader than a dodo on downers. Okay, a couple of bars send out lights like lonely lighthouses. Chances for eats? Ha!

But then, someone’s just put this sandwich board out on the sidewalk. “Late Happy Hour,” it says, “8 till close.” 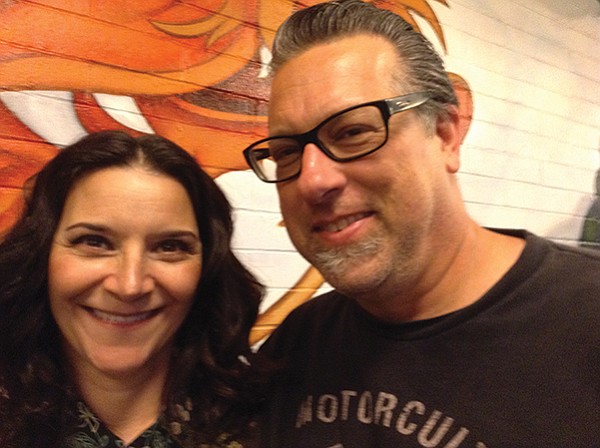 Roxanne and Scott: "We had an attack in Paris two blocks away."

Looks like a noodle place. A ramen place. BLVD Noodles. Oh, yeah...except, oh no! Now I remember fellow-foodies Patrick Henderson and Chad Deal writing about it. Something about La Mesa’s found its noodle at last. 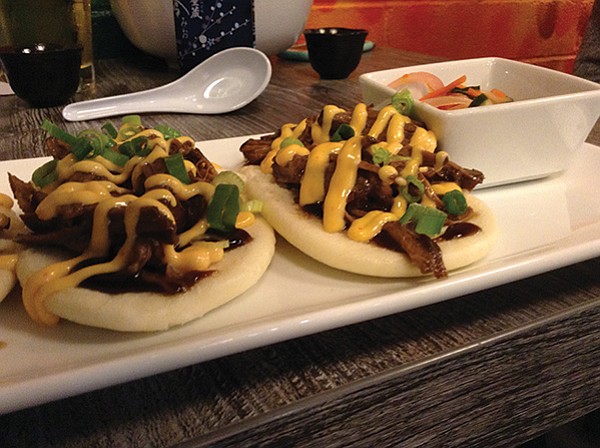 What to do? Options evaporating like ghosts at dawn. Besides, now I’m hearing music from inside. Cool, bluesy music. Live. Plus omens? Up front, a wall of gold and white ceramic cats, dozens, are waving at me. Also, they have Stone’s Delicious IPA on tap, and it’s calling my name. Oh, man... 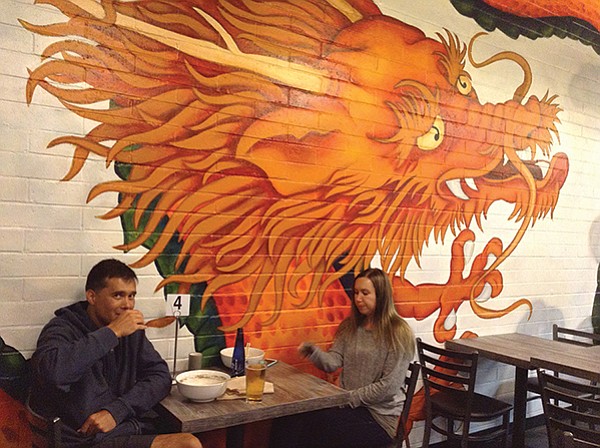 So what the heck, I come in, order one. Costs $6. Full price, because we’ve still got 15 minutes till late HH. I’ll hold on ordering any food till the clock hits 8 p.m.

There’s quite a li’l crowd out on the rear patio. Couple dressed in black are playing blues guitar and bass. Dang, but they’re good. This whole tune, the lady on the bass plays one low note. Hypnotic. ’Course, all the while, the guitarist dude goes to town on variations that would make Bach blanch and Santana swoon.

They’re called Black Market III. How good? I go to sip my Delicious and there’s nothing left.

Then — Cinderella time: eight o’clock bongs out, and I swear you can feel a weight lift off the house. People dunk their heads into menus.

Me, I listen to Sabrina the server.

The actual ramen bowls run from $9 (for the Spring Bowl, miso broth and only veggies) to $10 for the Fletcher Bowl (miso pork broth with two slices of pork belly), and the Village Bowl (tonkotsu — pork bone — broth with two pork-belly slices). Top o’ the line are the $12 Mesa Bowl (basically beef broth with braised brisket) and the BLVD Bowl (tonkotsu pork broth, four pieces of pork belly, ginger, corn). All except the Spring Bowl include an egg, boiled in the juices.

So, I have to have some kind of pork belly. And, hey, that small plate cha-siu gets you four slices for $4, and if it’s the second item, with the HH deal, we’d be talking two bucks! Natch, I ask for that, then the karaage because it sounds hot shot, even though it’s really just deep-fried chicken. And then the lumpia plate, even though it isn’t even Japanese.

I go for another beer, but a Sapporo this time, because, during late happy hour, $3.

Next to me at the counter are Black Market III, Scott and Roxanne, ordering BLVD and Spring Bowls. And, goodness, these guys have been around. They spend months in Europe every year. “Europeans love the blues,” Scott says. “Of course, right now, you take your chances. We had an attack in Paris happen two blocks away from where we were performing.”

Ten minutes later, I’m looking at my collection of lumpia, cha-siu, and karaage. It’s a lot. But even now my hungry eyes migrate to this couple who are chowing down on the dish I almost went for, the bao bun tacos. I was curious because, well, Japan meets Mexico. Oh, man. Those tacos all dressed up with yellowed stripes of Sriracha sauce above and deep chocolate hoisin below. They look totally yummy.

“Actually, I had the BLVD Bowl first,” says Stephan. “But it wasn’t enough.”

“The veggie bowl’s best,” his friend Anya says. “The Spring Bowl. Plenty of flavor, not greasy.”

“Estonia, where Skype headquarters are,” she says. “Estonians invented Skype.”

Seems Estonia’s one big Eastern European Silicon Valley. But Anya loves California. “It’s warm. Not just the climate. People. It was incredible when I arrived. They smiled. They were nice to me for no reason.”

This is her third time eating here. “I like La Mesa better than downtown. It’s, like, more personal. More outside. Easy attitude.”

These two are both studying to be lab technicians. He’s vascular, she’s echo. They fight over which is harder.

We swap some of my karaage for a bao bun taco. Deal? This is deal-icious. The “tortilla” for a start is like a pillow. The brisket is ramped up flavor-wise with some of the pickled cucumber-carrot slaw you get, but even more with the shock of the sweet hoisin sauce, along with the slightly anchovy-chili zip of the Sriricha.

On the way out, I have to ask Sergio about the hand-waving cats.

I almost expect him to add: “Estonia.”

Happy Hour prices: $1 off drinks; buy one, get one half-price for small plates