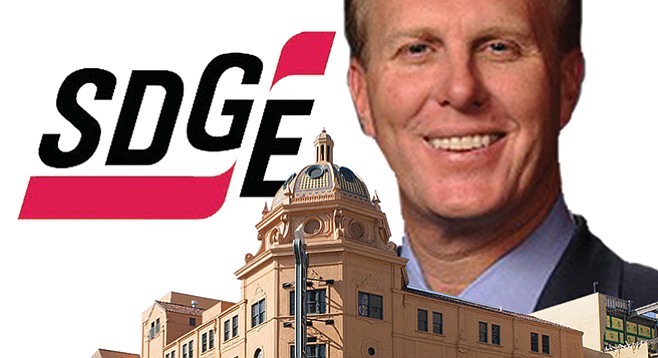 It took more than five months, but the identity of a major city-hall special interest that provided some of the scratch to help pay for San Diego mayor Kevin Faulconer’s January 12 State of the City speech has finally been revealed.

According to a legally-required disclosure filed by the mayor with the city clerk June 17, utility giant San Diego Gas & Electric forked over $4000 in cash on May 3 to the San Diego Regional Chamber of Commerce to cover partial costs of the Balboa Theatre blowout. The nature of the expenses isn’t provided.

In February, the Union-Tribune reported that lobbyists for SDG&E had recently been in to see Faulconer and several city-council members regarding the firm’s controversial resistance to plans for eliminating its power-distribution monopoly.

Isn't SDG&E the ones trying to put tons of nuclear waste at the nuclear plant. Go figure the Mayor's paid off by them.

The chief owner of SONGS is So Cal Edison (78.2 percent), while SDG&E only has 20 percent, and the City of Riverside, 1.8 percent.