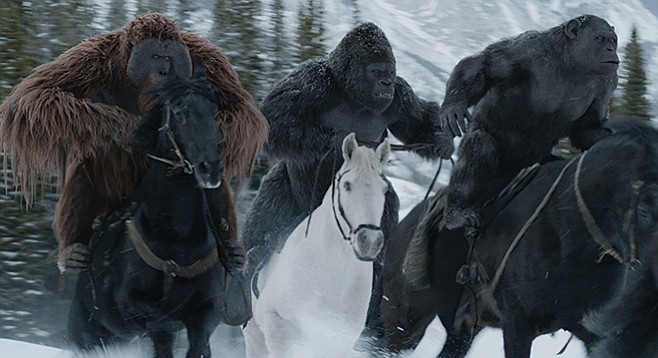 The 20th Century Fox fanfare (with CinemaScope addendum) that opened War for the Planet of the Apes was performed on jungle drums and didgeridoo. Sometimes a film earns points even before the opening credits hit the screen. Other times, a variation on a studio logo is as avant garde as it ever gets. By the time this was over, I wanted to holler, “Fail, Caesar!” 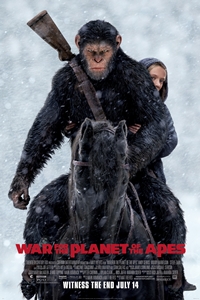 War for the Planet of the Apes 1.0

Franklin Schaffner’s original Planet of the Apes arrived with the force of a flying fist palming a roll of quarters. This wasn’t just another Saturday afternoon spent killing time with 007 knockoffs or cardboard Andrew V. McLaglen oaters. From this 12-year-old’s perspective, the shock, awe, and profundity of Lady Liberty buried waist-deep in the sand was unlike anything I’d experienced in a movie theater.

Four times in one week! An early personal best. My enthusiasm proved infectious; even dad couldn’t avoid accompanying me on a visit to the neighborhood theater. Unbeknownst to me at the time, there were many lessons to be gleaned from the original Apes, starting with the obvious: suspension of disbelief is never going to happen when that’s clearly Roddy McDowall buried beneath all the makeup. It was also the first picture that taught me no matter how great the movie is, that still doesn’t mean any of the sequels are going to be worth a damn. Having enjoyed the original at least a dozen times since its release, the urge to revisit any of its four spin-offs never once crossed my mind.

The franchise was put to rest in 1973. It remained in mothballs for almost 30 years, waiting for Tim Burton — flanked by an overpriced cast of simian-costumed actors and with no script in sight — to basically fling crap at the audience for two hours. It turned a profit, but not enough. It appeared that Fox had finally finished monkeying around with Apes.

When accused of entering certain movies loaded for bear, I volley my return that nothing does more to shatter preconceived notions than a good movie. The thought of yet another Apes reboot was about as enticing as a peanut butter and petroleum jelly sandwich. So imagine my surprise come 2011.

Superman made good on its technological promise, “You’ll believe a man can fly!” With Rupert Wyatt’s Rise of the Planet of the Apes and Matt Reeves’s Dawn of the Planet of the Apes, we now believe a motion-capture monkey thinks, feels, reasons, and eventually speaks. In their own way, both films can stand proudly alongside the 1968 original. If nothing else, I never once found myself asking, “Is that Andy Serkis behind the motion capture suit marked with white dots?”

Here are three more questions that never would have come to mind had Reeves and Mark Bomback’s script for War been something other than a routine comic-book combat picture: 1) When Caesar speaks English, how do his fellow primates understand what he’s saying? 2) Half the time the apes converse in sign language. With his back turned or eyes pointing downward, how is Caesar able to follow the conversation? 3) Do human soldiers really believe these inarticulate apes are going to walk away with hurt feelings from references to King Kong, Bonzo Goes to College, and Apocalypse Now?

Andy Serkis spends too much time working Caesar’s trademark scowl. Woody Harrelson should be having more fun playing the slapdash, all-consumingly evil alt-right colonel driven by his hatred of Caesar and a deep-seated dedication to keeping humankind the dominant force. Young Nova (Amiah Miller) is based on the mute character originated in 1968 by Linda Harrison. More on Nova if a Part 4 is warranted.

After two pictures, it’s clear the gimmick works. Reeves earned his rightful spot on the threequel, but instead of continuing the forward movement, the filmmakers kicked back and let the computer do most of the storytelling. With its overcast battle scenes, smattery characterizations, and softball comic relief — Steve Zahn’s raspy Bad Ape has Ewok written all over it — this one feels closer in spirit to Burton’s bore than anything else.

The film raised one terrifying question: so long as Trump is in office, will building a wall to keep immigrants out replace drugs as the new plot motivator for the narratively challenged? No more puffery! If there is to be a fourth installment, it’s time 20th Century Fox shattered their in-house rule against inter-species relationships and allowed Nova and her betrothed to be pronounced woman and ape.

Ah, c'mon , Marky! You're starting to sound like your colleague Lick. You gave DAWN four stars--what's wrong with this one? WAR is actually a better movie. DAWN was cold and distant--and the human characters were rather bland with the performances being only average (except for the great Gary Oldman), not to mention a fight scene that seemed to go on and on! WAR has better acting and vet Cinematographer Michael Seresin has delivered stunning vistas! So what's wrong with the images telling the story? I could watch BATTLE OF ALGIERS with the sound turned off and STILL understand it! That in NO way invalidates it as a narrative. You're wrong on this one--and then you start to nit pick, a la Duncan Shepherd. After all, didn't Herzog once say that cinema is the art of the illiterate??? I believe this is what he meant. Though my personal favorite is RISE because of Caesar's character arc, WAR is still a solid entry in the trilogy. Hope it makes a beaucoup dollars!

At 140 minutes, it's a good 30 minutes too long. Harrelson's character is the weakest villain in the trilogy. Better to err on the side of blandness than another predictably over-the-top comic book creation. The obvious Trump metaphors are as simple-minded as the man who spawned them. Vistas? What about the endless closeups of Caesar scowling at the audience. The pathos surrounding Nova and the adorable little monkey moppet proved too much to bear. Love the first two, but this thing bored me to tears. Not unlike "Captain America," they should have quit after Part 2.

I'm going to agree with Marks here. The plot holes and head scratchers were legion.

1) It was out of character for Caesar to leave his troop of apes to try to singlehandedly kill a man surrounded by thousands of soldiers.

2) no explanation given for why some apes are traitors, or that they have gotten smart enough to make such a choice. In fact, most can't speak. Seems like natural herd mentality would make them stay with their own kind.

3) by now, more of them should be speaking

4) No indication of why a whole battalion of soldiers would blindly follow Col. Woody when they had other choices. Nothing about him said charismatic leader.

5) The charcoal filter over everything was hackish in the extreme.

6) Why would Caesar lead his people from a lush watered rainforest to a desert, lake or no lake

8) The guided missiles and such would not work in a post-apocalyptic world without satellites and computers and such.

9) Caesar's powerful scowl loses it's effect when it's used every three minutes.