Chicken of the Sea change 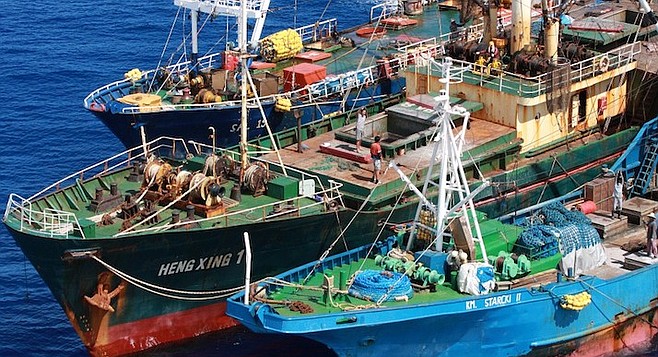 Terms of the agreement seek to address what Greenpeace says are unsustainable fishing practices that garnered both Chicken of the Sea and its San Diego-based competitor Bumble Bee low marks on annual reports produced by the group. Also included are commitments to address widely reported human rights abuses on supplier vessels.

"It's big for us on a number of fronts — with Thai Union being the largest tuna company in the world, responsible for one in five cans of tuna shipped worldwide, one of the things we wanted to do was get a commitment that would take them out of their comfort zone," Greenpeace's global seafood markets project leader Graham Forbes told me. "We think this agreement does that, not only on the fishing side but also with respect to labor issues that desperately need attention."

One significant change is in vessel inspections – particularly with regard to transshipment, a practice in which a larger ship will meet a fishing boat at sea, taking in its catch and allowing the vessel to remain on the water to continue fishing while avoiding inspections at port.

"A lack of transparency surrounding transshipment has notoriously led to illegal activity, whether it be shark finning or people being held captive on vessels for years at a time. If you look at the western-central Pacific region, the requirement is that about five percent of those vessels need to have observers on board, but realistically it's probably closer to two or three percent," Forbes explains. "By 2020, [Thai Union has] committed to have 100 percent human or electronic observer coverage on all of the long-line vessels that they source from. Because it's such a highly problematic point in the supply chain, they're committed to human observers on every transshipment that they source from looking not just at environmental issues but at human rights issues specifically."

There are an estimated 10,000 of these long-line vessels plying the world's oceans, though it's not clear how many sell to Thai Union and would thus be subject to detailed inspection. But in a tight knit industry, one firm's adoption of such policies could lead to others following suit.

"Bumble Bee, Starkist, and Chicken of the Sea have long worked together, sometimes too closely together. It's not just about prices, but it's been about sustainability, and trying to control the pace of change and the extent of changes," Forbes continues. "With Chicken of the Sea making this ambitious commitment, we're hopeful that the others are going to follow suit."

The company says it'll also expand its purchase of pole-and-line caught fish, particularly in North America through the Chicken of the Sea brand. And consumers who care to know how their fish was sourced will soon have the tools to do so.

"Another thing they've committed to is full digital traceability, from the vessel where fish is caught all the way to the shelf, so that will increase transparency across global supply chains," Forbes says. "It'll come in Chicken of the Sea cans, and through a can tracker website you'll be able to identify how the fish you bought was caught."

Still, though the changes are welcomed, they're seen as first steps for long-term sustainable fisheries. And many of the ideas aren't new — Bonita's American Tuna won praise in the same report condemning Chicken of the Sea for already incorporating things like pole-and-line caught fish and a similar fish-tracking feature on their cans.

"The scale is absolutely different," Forbes acknowledges. "Supporting small-scale best practice fisheries are absolutely essential, and smaller companies like American Tuna very much stand alone. But Thai Union, being as large as it is, getting substantial changes in its supply chain will have a huge impact across the industry."