"It's not a preserve and they shouldn't say it is" 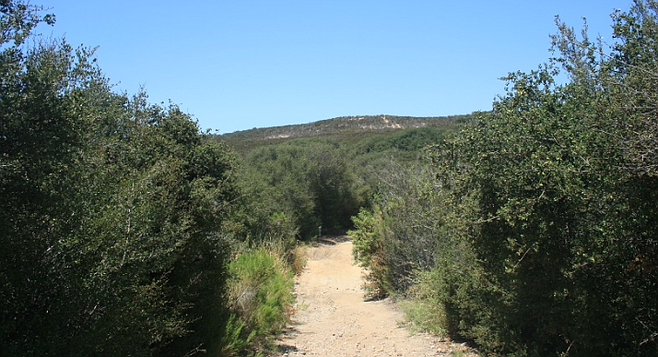 Rancho Peñasquitos residents and mountain bikers say they are worried that the coming development of an office complex called the Torrey Highlands Preserve will impede their ability to enjoy trails on the adjoining Del Mar Mesa preserve. They don't like the name much, either. 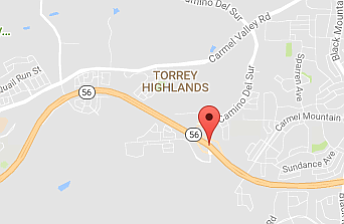 Highway 56 and Camino del Sur. the 11 acres in question are just south of the 56.

"It's not a preserve and they shouldn't say it is," said Melissa Harris. "They are developing a business park with big buildings."

The 11 acres of land are south of Highway 56, and has the Del Mar Mesa preserve on three sides. It will be served by a proposed extension of Camino del Sur. The freeway bridge over the street has been named one of the ugly bridges in the region. 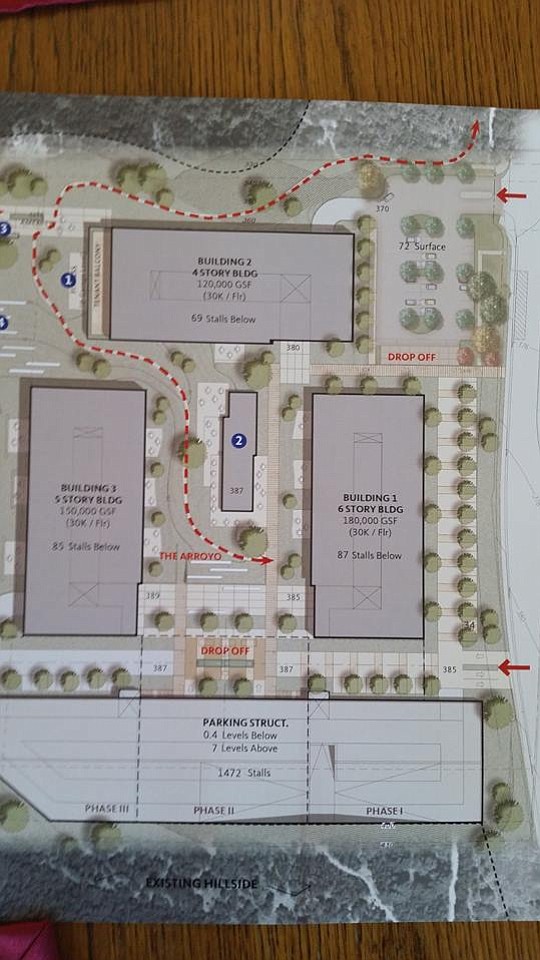 Plans for the Torrey Highlands Preserve.

Cisterra owns the land, which it bought from the Roman Catholic Diocese in June, 2015. Land use advisor Jeff Brazel represents Cisterra as the developers lay the zoning ground work to build about 465,000 square feet of office space, including plenty of parking and a cafe on site. 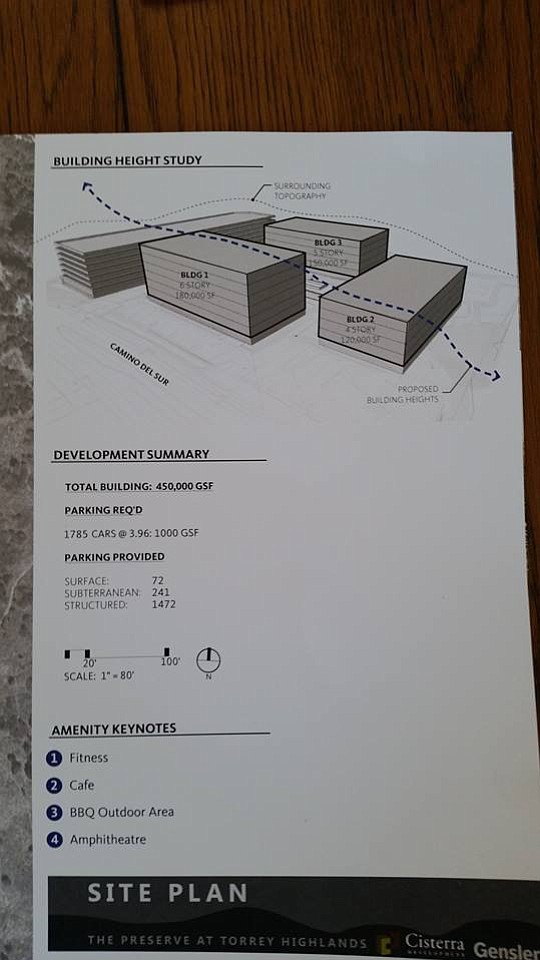 "Our original thought was to provide trail access from our property for people who will work here," Brazel said. "But the way the preserve rules are written, we can't do that."

The company plans to put in three buildings and a parking structure with a total of more than 1,400 parking spaces, Brazel said.

"One of the city's goals in the Climate Action Plan is to have people's homes closer to their jobs, to cut down on greenhouse gases," Brazel said. "I live in Rancho Peñasquitos and it is a bedroom community where most working people drive somewhere else to work. We think this project fits in and makes sense. The infrastructure is there and we have mixed use residential going in across the street."

The developer is asking for changes in the community plan to allow for buildings up to 13 stories, though Cisterra plans include buildings no taller than seven stories.

That worries Harris. "If they get that approval for 13, and then don't build and instead sell it to another developer, the 13 stories goes with it and the new developer hasn't made any promises to stay below that height."

The long-vacant land has been enjoyed by hikers, equestrians and mountain bikers, and the users have a sense of ownership - and concerns about how they will get around the land where they now go straight through it.

"I mountain bike there. The area is pristine," said Julie Adams. "It's my serenity."

The mountain biking community is particularly fond of the preserve. "Del Mar Mesa is a 2,000-acre ridge on the coast between La Jolla and Del Mar. The entire Del Mar Mesa is restricted to multi-use equestrian, biking, and hiking trails throughout the neighborhoods."

The preserve is owned by the city of San Diego (537 acres), California Department of Fish & Wildlife (81 acres), the U.S. Fish & Wildlife Service (75 acres), the county (27 acres) and private owners. (69 acres). The agencies have different missions and different rules about how the land may or may not be used. For example, bikes have been forbidden on state owned preserve land.

South of the notch, as the Cisterra land is called, mountain bikers are forbidden by the U.S. Fish & Wildlife rules, while the parts west and north are city-owned. However, not all the city-owned land is available for recreational use.

The San Diego Mountain Biking Association has been able to form relationships with the agencies and to successfully push plans to create trails.

Brazel has brought the project to the Rancho Peñasquitos Planning Board several times just to keep them informed, and he intends to keep doing that, he said.

mountain bikers are the whiniest people I have ever met.

Agencies and the environmental lands they protect run on tax dollars, the same dollars that become scarce when well-meaning people put a chokehold on the economy.

"and the users have a sense of ownership"

And that's the problem... they sincerely believe they should get the benefits of ownership without any of the pesky downsides like, you know, paying for it...

I don't know any mountain bikers personally, but I know their equipment is very expensive. If they have the resources to purchase these high tech bikes, I suspect they have the resources to recreate just about anywhere in San Diego County they want to. Why this particular piece of our county is so sacrosanct to them I don't know. But the one biker quote pretty much said it all. "It's my serenity". It is actually the serenity of all San Diegans, not the few well heeled bikers that can afford to live close enough to feel they own it. I'm not pro development but there is a propensity of the well born to assert ownership of things they don't actually own. Like public property meant to be used by all residents. We went through this with the coast back in the 50's. Now I guess we have to reclaim our parks too.