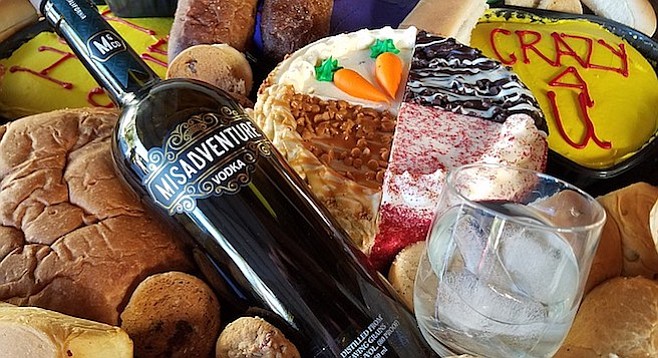 A new spirit producer in San Diego has debuted a line of vodka made from an unlikely source: discarded baked goods.

Misadventure & Co. was founded by local bartenders who initially got together four years ago to start a whiskey distillery. "We spent a year making a hundred different flavors of whiskey," cofounder Sam Chereskin recalls. However, "Once we got the flavor that we wanted, we didn't have the resources to do it ourselves."

Producing whiskey requires buying grains and aging liquor in a barrel — a capital-intensive process with delayed return on investment. White liquor can be produced much faster and be produced from anything with fermentable sugars.

"At a point, we were contemplating what to do next," Chereskin says. Then he had an idea: "We can do this out of food waste….

"Forty percent of all food grown in the U.S. gets thrown away," points out Misadventure cofounder Whit Rigali. He explains that the bread aisle of the grocery store accounts for a lot of that: when a new inventory of bread comes in, unsold bread gets sent out, often to an organization such as the San Diego Food Bank, which distributes food to people in need. However, each week, the food bank receives several tons more bread than goes out.

"There's so much of it that they throw most of it away," Rigali says. "Every Monday we go down to one of the big food banks in San Diego and pick up 1200 pounds of excess bread." He amends himself, "Actually — excess baked goods."

It's not just bread. Misadventure & Co. collects all manner of discarded baked goods, including cupcakes, donuts, muffins, and seasonal offerings, such as a batch of American flag cakes recently left over from the Fourth of July. Rigali and Chereskin say they've even made vodka incorporating such items as jalapeño cheddar bagels, Ho Hos, and Twinkies. In doing so, Misadventure reclaims some of the ecological value lost to food waste and gets a free source of fermentable sugars.

The 1200 pounds of bread, etc. is broken down into crumbs, stirred into water to create a porridge-like wort for the yeast to feed on. They distill the resulting liquor to a 96 percent pure vodka. For all the economic and environmental benefits of deconstructing baked goods to produce vodka, that's the part of the process that took time to perfect.

"No one has ever done that before," says Rigali. "We're the first in the world. So we had to learn how to do this stuff, and invent some things as well."

Doing so well was important, Chereskin adds, because while reclaiming food waste makes for a great story, "If it doesn't taste great, then who cares?"

Currently, Misadventure contract-distills its vodka at California Spirits in San Marcos, modifying its still with a custom column designed to increase efficiency. The pre-cut spirit then runs through a sequence of six filters, 30 times over to create a clean-tasting vodka priced at a modest $22 MSRP.

For now, Misadventure will grow its brand by distributing to bottle shops and bars in North County. "Eventually, we're going to go into our own place," Rigali says. "We're hoping to be in Vista." And then, he adds, "start our whiskey program."