On the water, planning taco brasserie on Champs Elysées

King and Queen of Pork set up on Embarcadero 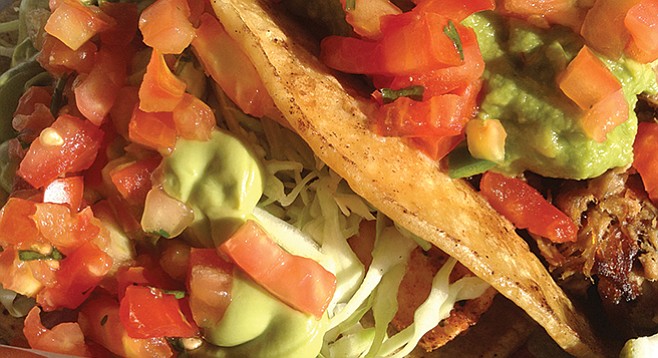 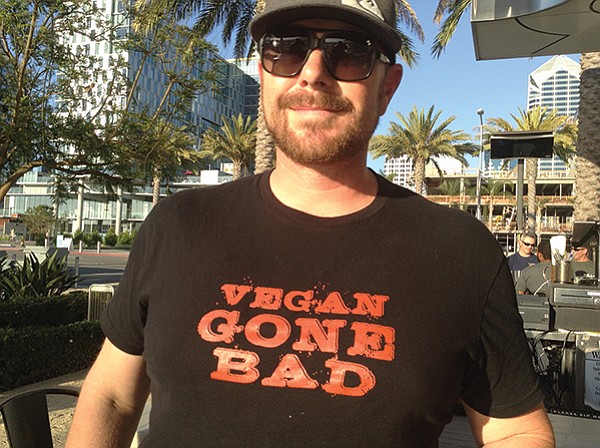 Aaron says he can do a combo of carnitas and fish tacos for $9.

John’s serious. “Roy was the bigger talent. Just because Elvis had the looks, all the girls went for him. But Roy was the great one.”

John is kinda qualified to say all this. The guy isn’t just a drummer who’s drummed with da best — he’s currently with a heavy rock band called Krank, in Ohio — but you’d swear he was Roy Orbison’s younger brother. Uncanny likeness. 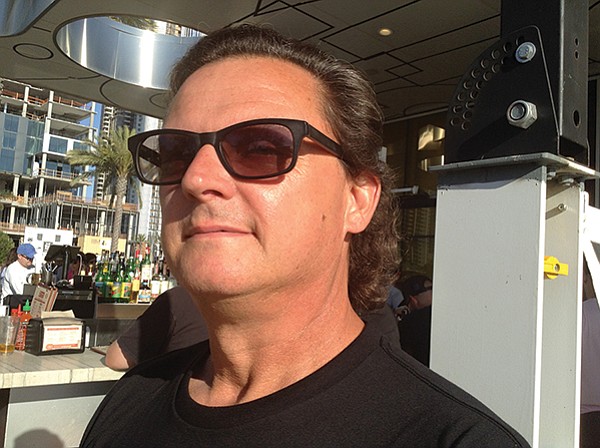 John: "Elvis had the looks, all the girls went for him. But Roy was the great one.”

This is the kind of conversation you get at a place like this. We’re sitting at this open-air square bar right on the Embarcadero, by the water, looking over to the USS Midway. It’s five on a Monday evening, and, hey, crowded. 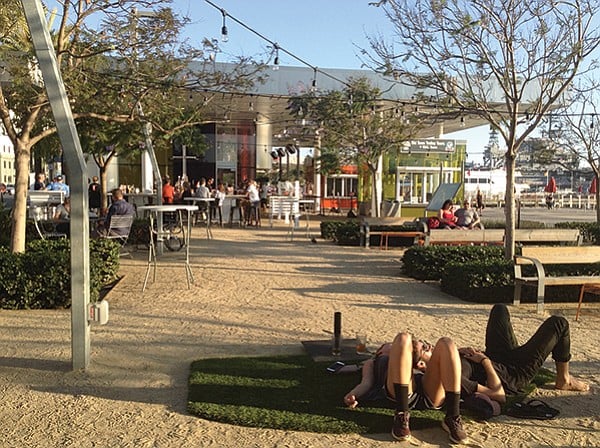 Other folks are at tables under trees, lying down on patches of astro turf with a beer.

It also feels like a first to me. A bar, right out on the sandy walkway, no protection, no “Please wait to be seated behind the railing” kinda thing, even though we’re in the middle of downtown. The main cluster of customers sits around the bar, natch, but other folks are at tables under trees, lying down on patches of astro turf with a beer, out on a deck over the actual waters. Started a year ago but looks brand new. 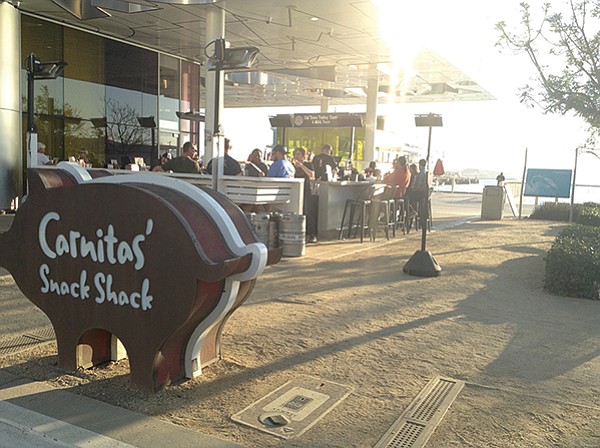 Chef Hanis Cavin and Sara Stroud set this place up a year ago, after running their North Park Snack Shack.

Man. All hail the Power of the Port.

So yeah. Spotted this at the bottom of Broadway and just had to come hoist myself on a stool here. I like that the bar’s marble-topped, serious. Also, doesn’t hurt that we’re smack in the middle of happy hour (three to six every day), and beers are $5 and a dish of carnitas (or fish, or steak) tacos is also $5, with chips and salsa.

I mean, yes, you can get two carnitas tacos any time for $8.50. I know: Not like San Ysidro prices (at Taqueria Revolución, tacos are $1.95). But not bad for prime waterfront.

Prices rise outside HH. Fish taco (blackened, grilled mahi) runs $9, a Snackshack burger’s $9.25, even guac and chips costs $8. But they have interesting stuff too, like beet terrine. Terrine is usually a pâté, a meatloafy thing. This one has roasted beets, goat cheese, spinach, and a balsamic glaze. It goes for $8. A pork belly appetizer with salad including apples is $9.

Guy two stools away takes delivery of a Triple Threat Pork Sandwich. Pork loin schnitzel, pulled pork, bacon, pepperoncini relish, and aioli. All I see is a mountain of pulled pawk and a thatched roof of bacon strips right under the bun. Costs $9.50. Hmm. Tempting.

Well yes. I take one of their HH $5 draft beers, the Eppig Civility blonde ale. Not that hoppy. Nicely drinkable. Eppig Brewery’s up El Cajon Boulevard way. Apparently, during Prohibition, its previous incarnation was partly run by Dutch Schultz, the gangster.

So foodwise, I’m umming and aahing over what to eat. “For happy hour, it’s carnitas, fish, or steak tacos for $5 with chips and salsa,” says Aaron. Simple choice. But when I dither between carnitas and fish, he says he can do a combo of the two for $9, if I don’t bother with the chips and salsa.

I’m just taking delivery when the guy on my left lifts his taco to his mouth. Has to be the same as my carnitas. He opens wide, lunges in, kinda disappears behind his taco, comes up for air, takes another bite.

“I keep returning for this,” he says. Name’s Arnaud. French. Paris. Living in New York. “It’s juicy, it’s huge, and you get all this free guacamole.”

He’s right. My two tacos have a ton of tomato chunks sitting in a sea of green tube-squirted guac on top of this pile of shredded pork sitting in a corn tortilla. I decide to tackle this before even looking at the grilled ahi taco next to it.

And yes, so much to eat, it’s gotta be worth the $4.50. Only complaint: they don’t have the usual array of hot sauces to choose from. Because it does need a kick. Also, the fish taco’s fine. But as usual — and this is just me — disappointing on the taste front. Fish is, well, fish.

“You don’t see a lot of tacos in Paris,” says Arnaud when I ask. “Food there is still rather French, with, sometimes, hamburgers.”

“Hey! Maybe this is our opportunity,” I say. “A classy-but-cheap taco brasserie on the Champs Elysées?”

“It would be huge,” Arnaud says. “But so would the rent.”

Conversation bops around. “Check me out on YouTube,” John the Roy Orbison look-alike drummer is saying. “‘Drummer John Townsend.’”

Got to split. I can’t finish the fish taco. Not because it’s not good, but I’m just too full of carnitas. With that HH carnitas taco and a beer, you’ve got a decent ten-buck meal. I see on the wall the owners here, Chef Hanis Cavin and Sara Stroud, are known as the King and Queen of Pork. They set this place up a year ago, after running their North Park Snack Shack for five years.

No two ways about it, pork is what’ll bring me back. Along with the whole outside bar, waterside factor. Setting sun’s laying tracks on the Bay as I get up.

“So I’ll have the contract next time,” I say to Arnaud.

“For the taco brasserie on your Champs Elysées,” I say.