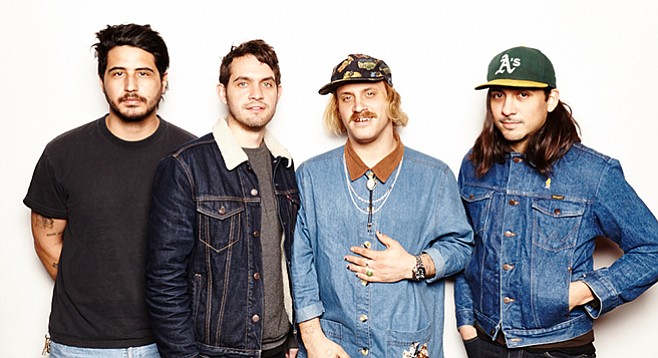 “This show may have set a record for me in terms of fewest days between booking and show date,” says AMSDconcerts honcho Carey Driscoll of the John Jorgenson Quintet event happening July 29 at host auditorium Sweetwater High School. 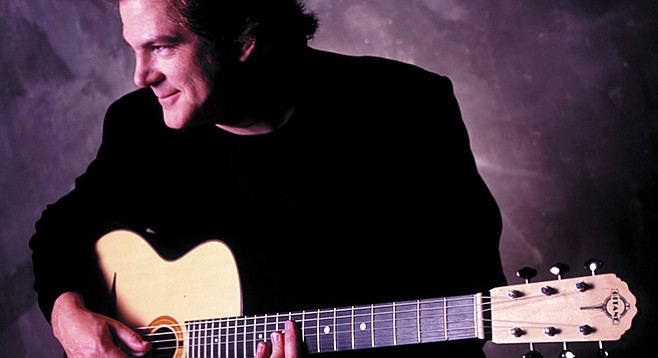 Guitar and mandolin with John Jorgenson

AMSD (Acoustic Music San Diego) kicked off its intimate concert series in 2003, going on to host over 600 performances, featuring both acclaimed and obscure touring acts, at area venues including a couple of moonlighting churches. Jorgenson has played several other local stages (Dizzy’s, Music Power, Anthology, etc.), but AMSD has attracted the innovative guitar-and-mandolin player multiple times, with this being his first appearance in the acoustically excellent National City auditorium. First earning acclaim in the mid-’80s with the Desert Rose Band, Jorgenson went on to the Hellecasters and a six-year stint of touring, recording, and doing TV appearances with Elton John. He won the Academy of Country Music Guitarist of the Year award two consecutive years and has performed and recorded with everyone from Sting and Willie Nelson to Bob Dylan, Mike Nesmith, and Billy Joel. His gypsy jazz quintet includes guitarist Doug Martin, violinist Jason Anick, bassist Simon Planting, and percussionist Rick Reed.

L.A. rock quartet Together Pangea opens their North American tour at the Irenic on September 14, in support of their fourth full-length Bulls and Roosters. Due August 25 via Nettwerk, there’s already a video online for the lead single, “Better Find Out,” directed by Steele O’Neal and featuring just under two minutes of the band furiously jamming the greasy road tune on a city rooftop, intercut with ’80s-tinted scenes of classic cars prowling the L.A. streets. If you’re into the post-punk ravings of likeminded noisemakers Parquet Courts or King Gizzard and the Lizard Wizard, this show might be just what you need to get you off YouTube and into a paid seat. If you really insist on viewing concerts through a smartphone, go ahead and use your own, and then put it online and tag the band. They’re reportedly looking to compile fan footage for an upcoming video. 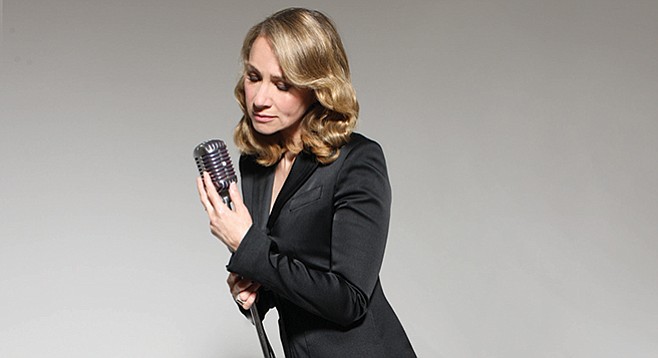 Joan Osborne, best known for the insidiously catchy “One of Us”

What if Bob was one of us? Bluesy roadhouse belter Joan Osborne, best known for the insidiously catchy “One of Us,” will answer that musical question at the Belly Up on October 29, when she performs a full set of Bob Dylan music. The last time an Osborne single charted in the U.S. (or pretty much anywhere else) was in 1996 with “St. Teresa.” None of the eight albums she’s released since 2002 (including a Christmas album and a compilation titled One of Us) have cracked the Billboard top 100. As a result, her Dylan project was launched with a PledgeMusic crowd-funding campaign swapping tribute-album donations for goodies like signed vinyl, handwritten and signed lyric sheets, custom voicemail messages, and even a private acoustic house concert. “Bob has been a tremendous inspiration, and I’ve been lucky enough to record with him and to sing onstage with him when I toured with the Dead,” says Osborne on her funding page. “After getting a chance to do an all-Dylan show during a two week residency in NYC, I decided now is the time to make this album.” Her history with Dylan goes all the way back to her 1995 debut Relish, which included her take on “Man in the Long Black Coat.” She’s been doing the tribute concerts for around a year now, usually including numbers from throughout Dylan’s career, all well suited for her evocative and road-weary vocals, such as “Highway 61,” “Gotta Serve Somebody,” “Forever Young,” “Dark Eyes,” and “Love Sick.” 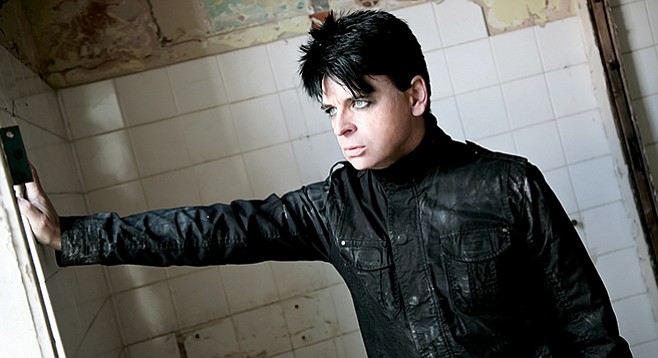 Electronic krautrock pioneer Gary Numan will open the U.S. leg of his new tour at Observatory North Park on November 15. People in this town are still talking about the day Numan brought his neon-trimmed multi-level stage show to the Fox Theatre downtown (November 2, 1980), a few months after the stateside release of his breakthrough single “Cars.” Pulsing like a live-action Tron set, the Pink Floydian production arrived complete with onstage bumper cars and Volkswagen-sized spinning, glowing pyramids that made the whole syth-drenched presentation play like the biggest, craziest, and loudest pinball machine ever built. Now 59 and travelling with a considerably pared-down stage show, Numan’s upcoming album Savage doesn’t have a release date at this writing, nor is its first single “My Name Is Ruin” available for streaming, other than a short “verse segment” on Numan’s website (a video for the single was filmed on June 16 and 17). “I think it’s true to say that I have a long history of choosing the wrong singles to promote albums,” he says. “So, with Savage, I’ve asked BMG and the PR teams to choose.” From what I can tell of the streaming snippet, Numan hasn’t changed M.O.s from his last few releases, most of which feature dark, hyper-produced electropop akin to the many contemporary acts who ripped his riffs for their own drone (I’m looking at you, Love & Rockets and Skinny Puppy). 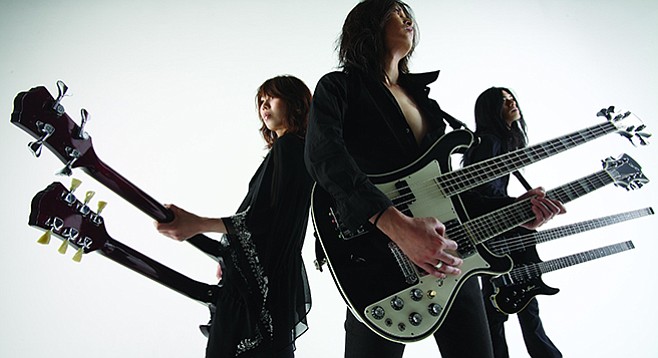 Japanese power trio Boris is wrapping up their current tour at the Casbah on November 17, with their newest metal tsunami Dear (due next week) marking a quarter century of splitting eardrums all over the world. The album has been in progress since 2015, but last year was spent on the Performing Pink tour, pushing back work on approximately three albums’ worth of material they say they recorded for Dear before narrowing down to ten tracks. Two dreamy doom-laced singles are streaming online, “Absolutego” and “Memento Mori,” both straddling a jump rope somewhere between the Melvins and San Diego’s own Prayers. A video for “Absolutego” presents the band in nightmarish monochrome, unspooling like an old black-and-white filmstrip as it melts from being too close to the projector lamphouse. It’s entirely possible that Boris’ younger fans have no idea what celluloid film is, let alone “get” the worn-out grindhouse imagery, but Boris has always been about feeding the past to the future, both sonically and visually. The bill includes Torche and Endon. 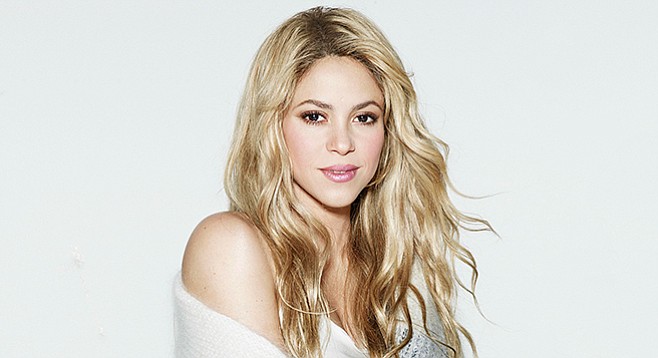 Shakira’s hips won’t lie, but they may stretch the truth a bit when the 40-year-old mother of two takes the Valley View Casino Center stage on February 9 next year. Touring in support of her 11th studio album El Dorado, the Lebanese-Colombian pop star hasn’t embarked on a worldwide road trip since 2010–2011, instead spending a couple of seasons as a mentor and coach on The Voice, promoting fragrance lines named Elixir by Shakira and Rock by Shakira, and voicing a hip-shaking gazelle in the 2016 animated flick Zootopia. She’s also been an activist for improving access to education for children in developing countries, where she promotes youth literacy and early child development. El Dorado is mostly sung in Spanish, with three English songs, but it still hit number 15 on the U.S. Billboard 200 chart, as well as topping Billboard’s Top Latin Albums and Latin Pop Albums charts. The video for “Chantaje” featuring Maluma has been viewed over 1.4 billion times. You may want to snag those tickets pretty quick — the San Diego date will be her penultimate stop in the Northern Hemisphere before embarking on a South American tour with dates TBA and seats BFD.