Struck out twice in San Diego 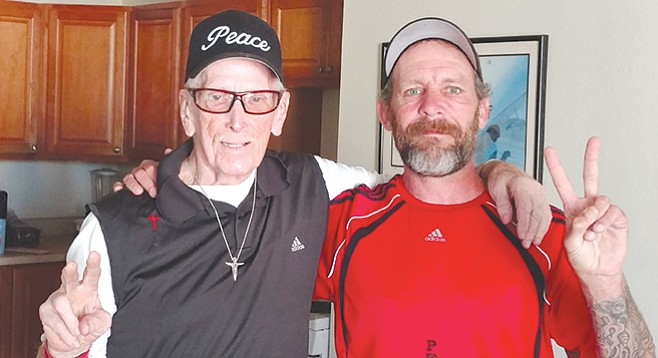 David Ross is full of stories. Gaunt yet sprightly at 82, Ross, known to his many friends on the streets of downtown San Diego as “Water Man Dave” or “Water Man,” has spent more than a decade supplying the city’s homeless residents with bottled water with a side of humor and hope. But of all his interactions with the hard-luck population, one stands out.

I meet Ross at the Transitional Storage Center run by Think Dignity, on a lot owned by the San Diego Housing Commission, a self-storage facility near the corner of 16th and K streets downtown. Access to the bins is a coveted luxury for those who have few others — one of the men I meet in the check-in line tells me he’s been coming by nearly every day for more than a month waiting for an opening. He produces a wellworn index card from his pocket as proof of his visits.

Even more popular than the bins is an audience with the Water Man. Gregarious and quick with jokes that vary between self-deprecating and grandiose, Ross pauses our conversation to hold court with men, women, and a family of four whose young children are eager to scour the back of his SUV for a bag of chips or water with which to reload their squirt guns.

Eventually, we depart the facility and, after making the rounds at Neil Good Day Center and a handful of other street corners to distribute water bottles and sandwiches, Ross steers his road-weary Ford toward the corner of Ninth and E, the location of his first check-in center, modeled after a similar facility on Los Angeles’s infamous Skid Row.

“A lady from National Public Radio was out here to interview me. She came out to spend a half a day with me but ended up spending the whole night,” Ross says, setting the scene for perhaps his most fateful evening working the streets in the spring of 2011.

“So, we’re here in our storage spot, and someone comes running and says ‘David, there’s someone over here with a knife and says he’s going to kill himself. He’s already cut himself up!’

“We all go running across the street toward the post office, and this man is sitting there with a weapon — a claw-looking knife, like you’d use for hunting or something,” Ross continues. “I didn’t know him, even though I know a lot of people from my years out here, but some of the other guys around are telling me he won’t talk to anybody. But they convinced him to give a few minutes to me, told him I’m not the police, I don’t work for the city, I’m not trying to get him turned in, all that jazz.”

The man’s name is Randy. He’s a painter and general construction laborer by trade, who’s come out west from Georgia, lured by tales of abundant jobs, good weather, and high pay. These promises, it turns out, have turned out to be an illusion — reality is a tough job market and a tougher life outdoors where the only respite is found in the bottom third of a liquor bottle.

“He’s crying, saying, ‘I’ve got nothing, my sister doesn’t love me, my family doesn’t love me anymore, I’m just gonna do it,’ feigning a cut at his veins with the knife,” Ross tells me, pausing for a moment as a car honks — we’ve been blocking the driveway to a new apartment complex that’s since been erected at his old home base across the street from the now-shuttered main library.

“I tried to talk to him real slow, he’s protesting, ‘You don’t have to help me, you don’t even know me!’ But I says to him, ‘Randy, if I was sitting here like you and I was in trouble and you could help me, would you?’ And of course he says, ‘Yeah, I’d help you!’

“I asked him where his relatives were, he keeps mentioning his sister. So I got her phone number out of him, I call the lady and ask if she’s got a brother named Randy. Her immediate response is ‘Oh, my God! Is he dead? We love him so much, and we don’t know where he is!’”

Ross convinces Randy to take the phone, and while talking with his sister the Water Man surreptitiously slips the knife out of Randy’s hand and disposes of it. In the meantime, family grievances are settled and arrangements are made for Randy to make his way home.

“We put him in a paramedic truck and got him to Scripps emergency, they got him bandaged up. Now it’s, like, midnight and they’re ready to turn him back out onto the street,” Ross tells me. “No medical hold or anything. So I took him home and he passed right out on my couch. We spent the next day going around doing what I do, delivering water to people, and then his sister sent him a bus ticket home.”

Given the vivid detail and animated nature with which Ross tells the story more than half a decade later, it’s obviously touched him. But the tale doesn’t end there.

“Last Tuesday, I was walking down B Street to have a sandwich, and this guy’s walking at me. I know he’s going to ask me for money, and he’s not from California — he’s got a straw hat on, beard, overalls. He asks if I’ve got 40 cents, says he’s got a part-time job up in Hillcrest but needs a trolley ticket,” Ross continues, jumping forward to the present day after we’ve made our way to an actual parking spot. (He feels no need to feed the meter.)

“I’m used to all this, so I tell him ‘Man, I’m broke as a joke and trying to hustle up some money for a sandwich. I was gonna ask you for 50 cents, so the way I see it you owe me a dime!’ And his eyes light up and he goes, ‘Do you know who I am?’ I just keep looking at him, and I got nothing. He says ‘I’m Randy — from the post office.’ Then my eyes are the ones that light up, because it’s this guy!

“When he went back home, I guess there was a lot of drama with the family. So we walk back to my car, and the last thing he says to me before he left is, ‘You know, David, me and my family will never, ever forget what you’ve done for us. We pray for you every night.’ And it hit me, this was heavy, heavy stuff. I told him that he’d have done the same for me, and he says, ‘You know, I think I would now, but I don’t know that I would have before that night.’”

“I’ve had a lot of things happen out here, but I don’t know that there’s anything that’s had this kind of impact. I’m not a doctor or a paramedic, but I know the people out here, and they can sense bullshit — I couldn’t tell him that everything’s wonderful or that it’s all okay, but I was still able to get through.”

About a week later, Ross is whisking me through the lobby of the Cathedral Plaza Apartments, a high-rise next door to Saint Joseph Cathedral reserved for seniors and others on fixed incomes, to his 11th-floor unit. After a quick walk down an interior corridor, I’m shaking hands with Randy, who sports a fit build and medium stature to go with a neatly trimmed full beard graying at the chin, camouflage cargo pants, and athletic shirt emblazoned with the message “Peace.”

I’m anxious to get his side of the story, including what drove him from the East Coast to San Diego not once, but twice.

“I got divorced in 1997, and at the time I had never been to California, so I figured, why not San Diego?” Randy explains in a wistful tone that belies the since-gleaned knowledge of the foolhardiness of his venture. “Back East, where I’m from, you always hear that San Diego’s boomin’ with work.”

Randy pauses several times, working up to retelling a much-condensed, but congruent, story of his suicide attempt.

“When David came along I had already cut myself. I’d been drinking at the time, but him and a lady found me. I don’t know who told them,” he says.

“David just started talkin’ to me, and him and this lady convinced me to go get help. So they took me to the hospital and I got stitched up, then I went to a crisis house in Oceanside for about a week. I got out and came back down here and saw Dave at the Neil Good Day Center. He asked me how I was, and I was still pretty depressed.

“I was in pretty bad shape. I didn’t see much in life. I still get depressed, but I try to look for positives in life, stay away from the negative.”

Once he made it home, though, things didn’t improve much for Randy. “I have a sister and brother in Georgia. I went back and got a job on a chicken farm. I did good, but I had a prior history in Florida for battery, so I had to go and do some time. When I got out, I was reading in the paper that California was booming again, that the minimum wage was $15 an hour. They report it like it’s already there. So I came back out here about four or five months ago.”

Again, things weren’t what they seemed.

“I pick up a bit of work here and there. I’ve gone up into the Hillcrest area and asked people if I can work. A few help me out with yard work and the like, but you can tell it’s a pity thing,” Randy continues. “I’ve gone down, like, off 16th Street where they’re building the high-rises, and asked for work. People are just real rude; they don’t want to give you a chance if you’re homeless and you want to work.”

Still, Randy says he’s tried to avoid charity, put off by the documentation standards Ross has long decried and a general suspicion that a majority of the organizations set up to help the homeless are driven more by money and statistics than human outcomes.

“They say I’m eligible for free housing, but I’d rather work. I’d never even got food stamps until I come out here, y’know,” he continues. “I won’t bullshit with you, there’s a lot of homeless people who don’t want to work. But there’s a lot that do, and by running us off, not giving anyone a chance... we’re just stuck. There are people who are homeless who want to work, who want to make their way up in the world.”

“I called a friend of mine in Georgia, she’s gonna send me a bus ticket tonight,” he tells me. “My brother’s already got a job lined up for me — I’m going to work in a factory. He says it starts out at ten bucks an hour, but it’s a lot better than sleeping out on the street here.