There’s always a full moon over the Caliph

It was bizarre then, and it’s bizarre now 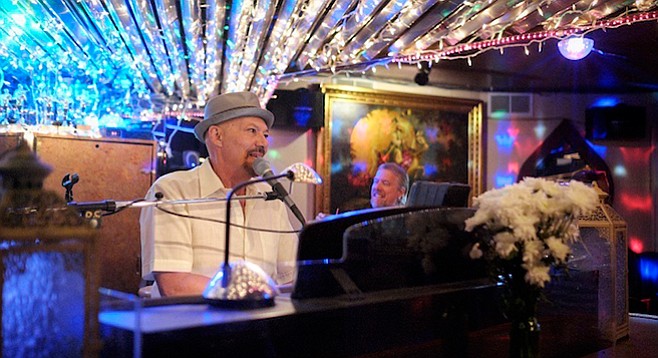 One day in 1957, Philadelphia disc jockey Hy Lit fell asleep listening to a stack of new releases. The last single played repeatedly until Lit awoke, leading him to include it in his rotation at WFIL and eventually propelling the song to #3 on the Billboard Top 100. Three years later, a hole-in-the-wall piano lounge with Moorish windows would open in the low-income, geriatric neighborhood of Hillcrest. Now, seven decades after the song’s release, the author of Lit’s sleeper hit (“Silhouettes,” lyrics by Frank Slay, performed by the Rays) sips white wine at the Caliph’s curved bar as the piano man plays Frank’s signature tune for the second time in an hour. An evening crowd of 15 or so whistles its approval.

“Thirty years ago, when I first played here, there was a real piano behind the bar,” Kenny Ard says after the keyboard’s backing MIDI track chirps through a coda. When he arrived in the late ’80s, Hillcrest was undergoing a boom of revitalization as a hub for San Diego’s gay community.

“It was bizarre then and it’s bizarre now,” Kenny smiles at the recollection. “I’m from New Orleans. It’s as strange of a town as this is a place. You know, we have a saying here: ‘There’s always a full moon over the Caliph.’” In a scratchy voice chiseled by 10,000 midnights, he greets regulars as they duck in the door. “There used to be a dalmatian that would sit in a booth in the corner wearing a handkerchief, drinking a cocktail, and nobody thought anything of it. That’s Bonnie, you know? So, what kind of music do you all like?” A few inquisitive bars of “Jeopardy” before someone shouts “Motown!” and Frank, who lives in the penthouse next door, cracks from his stool, “‘She’ll Be Coming Around the Mountain When She Comes!’”

“This is the man who wrote the top-ten song three times, so he can get away with being a smartass,” Kenny grins, leaning his way into “It’s De-Lovely.”

The disco ball spins, the rope lights sparkle, and the crowd takes to the little 4´x6´-tile dance floor sipping heavy-handed cocktails and feeling let in on a fantastic secret until late into the night, when Kenny eventually signs off, singing, “Last dance, last dance for love, yes, it’s my last chance for romance, tonight.”