ASCAP, BMI, and, "like, four of five of these scum suckers out there." 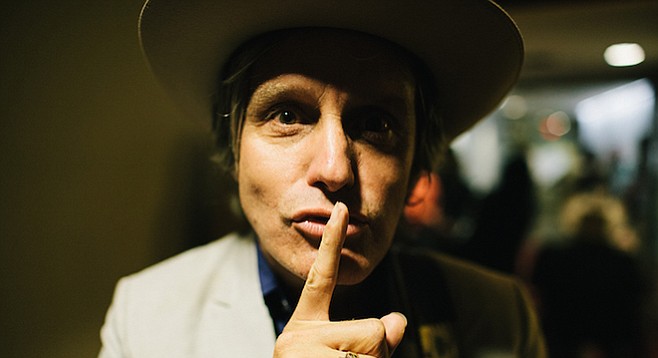 Called scum suckers and worse. In January it was announced that ASCAP (American Society of Composers, Authors and Publishers) had sued Jolt’n Joes in La Mesa and the Ramona Mainstage because they hosted musicians without paying licensing fees to ASCAP.

ASCAP, BMI, and other licensing groups collect performance royalties from TV/radio broadcasts that use music and from venues with live musicians, DJs, and karaoke. After ASCAP and BMI pays its staff, those fees are distributed to songwriters.

“Since I signed up with ASCAP, now BMI will start coming after me. There are, like, four of five of these scum suckers out there. It will end up costing me $3000 to $5000 [annually] to pay off those motherfuckers.”

Phil Paccione, owner of Jolt’n Joe’s, said on June 20 that he was just about to sign the final documents dismissing the lawsuit and would commit the La Mesa nightspot to paying ASCAP fees. He said he would comment as soon as that happened but has not responded since. The Jolt’n Joe’s La Mesa web page notes no scheduled shows.

“Litigation is our last resort,” said Jackson Wagener, ASCAP VP of legal affairs. “We only sue them after years of attempting to explain to them why they need their fees.” Wagener said the annual ASCAP fees are not negotiable. He said there are “two primary factors, the type of music and room occupancy...and it’s the same if you’re in New York or Omaha.”

Later in the conversation he said it was the goal of ASCAP reps to reach a “reasonable settlement” with licensees.

ASCAP spokeswoman Cathy Nevins says ASCAP does in fact set its own rates, based on the “marketplace...the size of our ever-increasing repertoire,” and “our market share relative to our competitors.”

Tom Goettle said he used to have live music at his Longshot bar in San Marcos but ASCAP/BMI fees drove him out of live music.

“If we had music three times a week, we would have to pay $4000 to $5000 a year [to ASCAP and BMI]. “There is no way I can justify that.” When he sold the Longshot he had discontinued music. “We would do anything to avoid paying them.”

RE: "Called scum suckers and worse" ASCAP (of which I'm a member) is a PRO (Performing Rights Organization). ASCAP and BMI protect the intellectual property of songwriters so they don't get ripped off. They have every right (obligation) to sue, when businesses use copyrighted songs to enhance their profits, but refuse to pay licensing fees. Orrin Day says: “I got away not paying them for ten years.” And he's proud of his deliberate cheating? What if Day wrote a book about the concert biz, and it was made into a movie (but the producers didn't want to pay him anything)? Who would be screaming for his money?--Orrin Day. An average songwriter (like a typical actor) doesn't make much money, so every dollar counts. I'm glad that ASCAP has as its president, the famous and talented songwriter Paul Williams. He fights for us! Creative works have value, and creative people should always get their fair share. Entertainment venue owners need to stop the whining and name-calling, and pay up. It's the right thing to do.

Only problem is that paying ASCAP its fees has been described by one businessman as akin to buying a pinata in Tijuana. Its completely negotiable...as the attorney admitted above, they seek to find a reasonable settlement determined after negotiation. They also admitted they charge whatever fee they want. No one oversees ASCAP or BMI as they decide what, who and how much they want to collect, and these groups are protected by federal law to set their own collection rates. They act as a quasi government agency yet have no supervision.

RE: "They act as a quasi government agency yet have no supervision." I take issue with that description. ASCAP is a nonprofit member-benefits organization. Why would it need "supervision" from the federal government? The world of showbiz has always been about negotiation over money. Guilds like SAG/AFTRA likewise exist to protect their members from being cheated by producers/studios.

Um, Mr. anonymous dwbat, ASCAP charges bars and restaurants whatever it wants and if those bars and restaurants don't pay, those businesses get sued and lose. It's a wild wild west free for all with no supervision. Of course it's a good thing that songwriters get paid. But under that aura ASCAP and the rest have become a license to print money with no supervision. First there was ASCAP then BMI popped up. Then SESAC, then another one or two have also sprung up. And now that Ramona Mainstage (or any place) has paid one, it must now pay them all. SAG and AFTRA elect their leadership. Their industrywide contracts they form with studios et al are negotiated in public. ASCAP randomly selects its pay schedule and there is no one or no thing there to mediate or modify or try to make it just.

I'm hardly "anonymous" as I've been writing for the Reader for 7 years. How can you NOT know that? www.sandiegoreader.com/staff/david-batterson/ I'm also on YouTube, where there are some of my music videos. http://www.youtube.com/davidbat