Melvins' walk with love and death 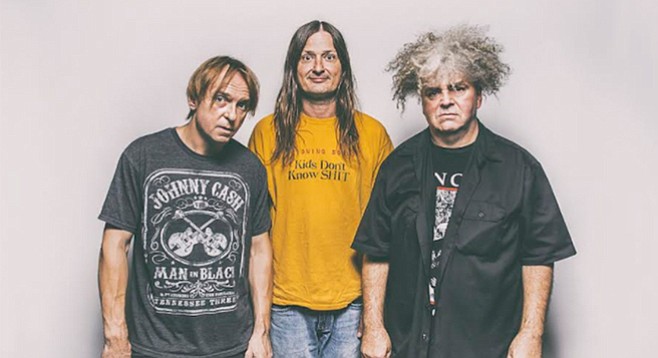 Here comes Buzz Osborne, leader of the Melvins, back with drummer Dale Crover and Redd Kross’ Steven McDonald on bass. On July 5th they hit the Casbah, far enough from the beach for Osborne, who spoke via email.

The Melvins and Spotlights

“Once when we were playing at a venue near the beach, I had this incessant heckler who would scream for us to play ‘the old shit’ every time there was any kind of lull in our set. I let him go on and on and then I ask him to shut the fuck up, which only made it worse. Finally I told him to get out or we weren’t going to play another note. He protested but left without incident, thankfully....

“Once while we were playing in England there was a young girl crowd-surfing who kept pulling her top up exposing herself to us vividly. Understandably, security tossed her out. After the show I was talking to some teenagers outside who said they were friends with her. They said she’d called her parents to come and pick her up. ‘Parents?’ I asked. They said, ‘Yeah, of course, she’s only 14.’”

You ever miss living in the Pacific Northwest, or is the heat treating you well enough?

“Heat? The cops usually leave me alone. I’m always amazed at how few police hassles I have when I’m not doing illegal shit. It’s the same in the Pacific Northwest. Other than a few random asshole cops, I can usually skate right past the man with no hassle whatsoever....

“When I lived up there I was engaged in a lot more criminal activities than I have since I moved to California, and not surprisingly I had a lot more run-ins with the local yokel cops. Served me right for being a little fucking asshole.”

Buy the Melvins’ new double album, A Walk with Love and Death.