Stepping on the mayor’s news 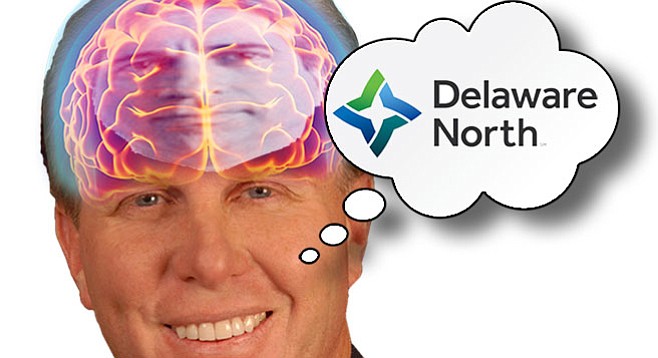 With the Chargers safely out of town, Kevin Faulconer’s allies have been upping their post-game attack on team owner Dean Spanos and special counsel Mark Fabiani for setting up the mayor for political failure.

“Throughout 2015, Fabiani worked tirelessly to sabotage any stadium progress in San Diego,” charges public relations maven and ex–Faulconer city hall aide Tony Manolatos, who staffed the mayor’s so-called independent stadium task force two years ago. “He did so because Spanos needed to prove to NFL owners that a deal could not be reached in San Diego.”

Not mentioned by Manolatos was Fabiani’s February 17, 2015, letter to Faulconer, calling out a series of alleged ethical and legal missteps by the mayor’s top political aide Jason Roe, commonly referred to in local political circles as the mayor’s brain. “What legal and ethical issues are raised by Mr. Roe’s dual role as an apparent de facto Task Force member and as a registered lobbyist for the Delaware North company, which is bidding to become the new concessionaire at Qualcomm Stadium and, potentially, at any new stadium in San Diego?” queried Fabiani.

“Putting the legal and ethical issues aside for a moment, what sense does it make to have someone who is your chief advisor on political matters, and who advises a potential stadium vendor on business matters, play any sort of role with the ‘independent’ Task Force?”

The mayor subsequently awarded the contract to Roe’s client, shortly after which Roe quietly exited the city hall influence-peddling business. “Spanos and Fabiani did leave us with a parting gift,” groused Manolatos. “They dropped their news on the same day as the mayor’s State of the City address. That wasn’t by accident. They wanted to step on the mayor’s news.”

With Roe seemingly destined for a big role in any bid by Republican Faulconer for higher office — including a putative race for California governor in 2018 — stepping on the mayor’s news is regarded as a high crime and misdemeanor by his brain trust, including staffers who revolve on and off the public payroll as politics demand.

An example is Anthony George, onetime intern at Roe’s Revolvis Consulting and a former Faulconer campaign aide who in early 2014 went to work at city hall as the mayor’s “community representative” for Mission Valley, including Qualcomm Stadium. Last February, as the Fabiani controversy kicked into high gear, George mysteriously left city employ for what the mayor’s spokeswoman Jen LeBron Kuhney would only call a “leave of absence.” Soon thereafter George surfaced as Faulconer’s deputy campaign manager, before returning to his tax-funded city gig following the mayor’s June 2016 reelection.

Faulconer’s chief of staff Stephen Puetz is another Roe veteran. “Puetz was named campaign manager of the year by the American Association of Political Consultants for his role in electing Mayor Faulconer,” says his LinkedIn profile.

If San Diego voters judge Faulconer on the disChargers they are dumber than a box of rocks. Faulconer should be judged on how he handles the problems and issues that directly affect San Diegans like crime, roads, jobs, etc. The issues surrounding the departure of the disChargers has nothing to do with the quality of life in San Diego but all about giving taxpayer money to billionaires and millionaires. The question for San Diegans should be Are things better under Faulconer or not.

On tonight's news, it was reported that Delaware North has started layoffs.

And that the city also owes DNC over $1 million since the Chargers have abandoned the Q and SD for LA. Another quality contract the city signed with someone. Who the hell keeps writing these contracts and leases?

Faulconer has subscribed to what I've long referred to as the "third rail of local politics." In other words, he was utterly fearful that if he didn't placate the Spanos gang somehow with a new stadium, or at least give himself cover when he could not pull that off, he would be political toast. And so, instead of those wonderful promises he made when first elected, and then later on when re-elected, he pissed away his energy, time, attention, and (most important) political capital. There was little or none of any of those things left that would have allowed him to make more than verbal attempts to work on the quality-of-life things Alex mentions above.

There are aspects of the city's infrastructure that cry out for attention. Crime, including a major reform (swamp drainage) of the police department, needs much effort. Jobs are always a consideration, and I don't mean city government jobs. The city is notorious as unfriendly to business in too many ways to list here.

He might have taken a chance, and rather than keep that Chargers/Stadium pot boiling, have just told the crooks and the citizens alike that he had much greater priorities. And for the past three years (approx) have put his energy and attention into repairing the potholes, water mains, sewer lines, etc. Then he could have gone to work on reforming the hick town police department and its chronic cronyism. Making sure that the tax dollars going into the fat wallets of city employees were actually getting results would have been the unifying theme. He might have received widespread, even national, recognition as a bright, good-looking reformist mayor. Ahh, but that's not what he did, or ever will do. He won't be known as any sort of reformer or even an effective city CEO. He's just another in a string of political hacks who have sat in the mayor's seat.