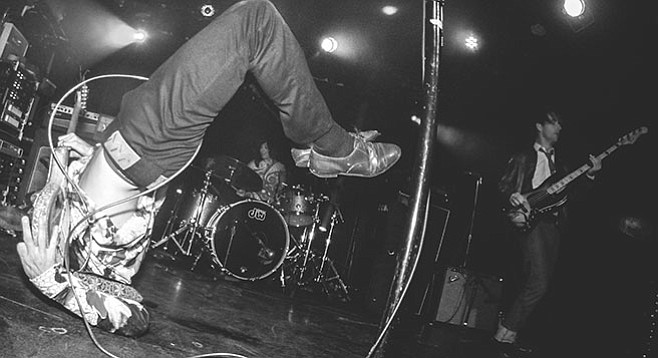 The Schizophonics’ appreciation of different musical styles comes through in everything they do. Led by husband and wife Pat (guitar, vocals) and Lety (drums) Beers, the band offers a potent blend of punk, rock, and soul. The Beerses also mix things up with numerous side projects — Lety is a member of the Rosalyns, the duo that serves as the backing band for Robert “El Vez” Lopez’s punk outfit, and they play in two tribute bands (Bowiephonics and the Little Richards).

Since relocating here from Tucson in 2008 and forming the band the following year, the Schizophonics (which currently includes the New Kinetics’ Brian Reilly on bass) have received a shelfful of awards, including being named best live band by SounDiego last year. After wrapping a UK tour and playing two high-energy sets at the Psychedelic Masquerade on New Year’s Eve, the Clairemont-based couple took a moment to talk about their band’s “stupid” name, music’s holy trinity, and why Bowie meant so much to so many. 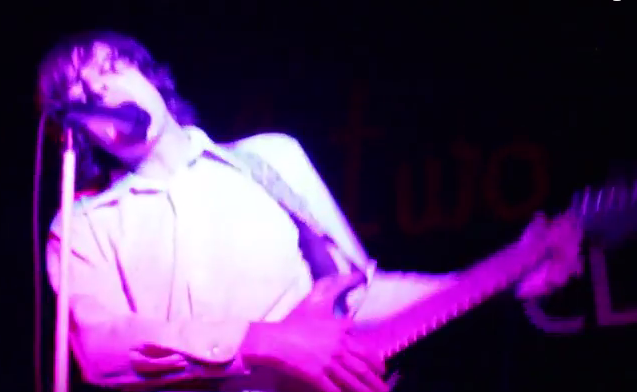 Catch the Schizophonics Soul Revue at the Casbah Friday night, January 27, with the Magnificent and the Gargoyles.

What brought you two to San Diego from Arizona?

Pat: I moved out here with the intention to start a band. The day before I left Tucson, I ran into Lety, who I’d played guitar with in high school. [After I left] we talked on the phone every day until I convinced her to move out here. She started playing drums a few months later when we started the band, while I was trying to figure out how to write songs.

How did your high school friendship blossom into getting married in 2011?

Lety: We met when I needed a bass player for my Ramones cover band. After I graduated, we each went our separate ways and in 2008, after seven years, we ran into each other in Tucson and instantly hit it off.

What’s the story behind your name?

Pat: The name is really stupid, but we’ve had it this long so it’s kind of too late to change it, though there are several other bands called the Schizophonics out there. It was originally for a soul band I was trying to put together in Tucson. The name was sort of a take on the Delfonics.

Which artists most shaped who you are today?

Pat: The holy trinity of performers for me is Jimi Hendrix, Iggy Pop, and James Brown. They were completely free and sincere on stage. The MC5 are also a big influence, and not just because of the current insane political climate. Their music is overwhelming, it forces you to move.

Speaking of moving, from where do you get your energy for your live shows?

Pat: I just react to the music. I don’t know why it makes me freak out like that. If I’m lugging my amp down to the club, I’m going to have a good time, even if no one else does. Every show could be your last.

How did you come to collaborate with El Vez?

Lety: Pony Death Ride introduced us to him at Bar Pink and afterwards he got the idea to have us as the backing band for his punk-rock revue. Since then we formed a Little Richard tribute band, the Little Richards. We’ve learned a lot from playing with Robert, and when he’s in town we usually play a few shows together with one of our projects.

Given your part in Bowiephonics, how did the loss of David Bowie in 2016 affect the band?

Pat: I think Bowie’s passing hit a lot of people especially hard, us included, because so much of his music was written for freaks and outsiders. His “You’re not alone!” mentality made him like a close friend to so many people.

Any new music or special shows planned for 2017?

Lety: Lots of new releases coming up. We have an LP and a 45 record coming out on Sympathy for the Record Industry and a ten-inch record on Pig Baby Records. We’re also working on getting into the studio in the next few months to work on the second LP. And both the Little Richards and the Schizophonics are part of the Hidden Volume Records’ Field Trip South in Orlando, February 24 and 25.

Which local bands do you think are killing it right now?

Lety: We are big fans of the Loons. They always put on a great live show and their records keep getting better and better. Some of the production on the new album reminded me a lot of the Beatles’ techniques.

Pat: I love me some Creepy Creeps. They’re the perfect mix of heavy dance music, garage, surf, punk, and everything I love, with crazy costumes, go-go dancers, a hype man, and a wild live show.

What’s one thing about you few people know?