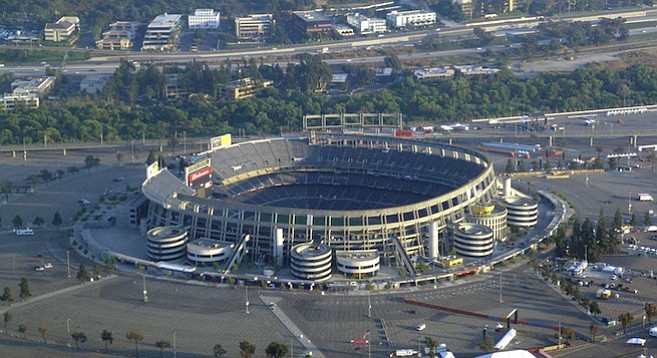 When it comes to disposing of city-owned Qualcomm Stadium, it appears that San Diego taxpayers are the last to know.

As reported late Sunday (January 22) by KNSD’s Derek Togerson and others, an "investment group" run by ex–New York hedge-fund maven Mike Stone and former Qualcomm vice chairman Steve Altman are about to unveil a scheme to obtain the current Qualcomm stadium site from the city for what is only described as ”fair market value" to develop the acreage as a Major League Soccer stadium, to be shared with San Diego State University.

Adds the report, "the proposal would also set aside land for the possible construction of an NFL-caliber stadium in case the league decides to return to San Diego, as well as the opportunity to build out and expand the San Diego River Park with transit-oriented, mixed-use development to activate the River Park and stadium uses."

According to another widely circulated version of the deal, Stone and company may be set to bankroll a high-dollar signature-gathering effort to advance the project.

Similar campaigns backed by wealthy development interests have found little favor with voters in recent years, with the list of multimillion-dollar losses including a shopping mall proposed for Carlsbad Lagoon; North County's Lilac Hills Ranch subdivision; and the Chargers stadium. 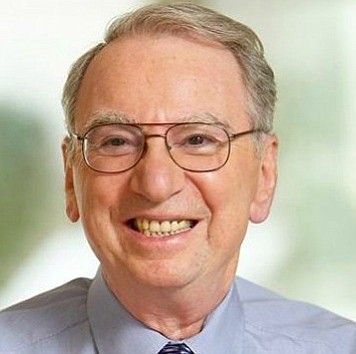 What distinguishes Stone and Altman is their longtime association with cell-phone-chip giant Qualcomm and its cofounder Irwin Jacobs, along with his son Paul, Qualcomm's executive chairman, all of whom have been big-money backers of Nathan Fletcher, the onetime Republican assemblyman who became an independent and then a Democrat.

In the spring of 2012, Stone, proprietor of La Jolla–based Freestyle Capital and before that a managing partner at Wall Street's J.H. Whitney & Co., came up with $10,000 for a political action committee known as icPurple that flooded the airwaves with TV spots for Fletcher. 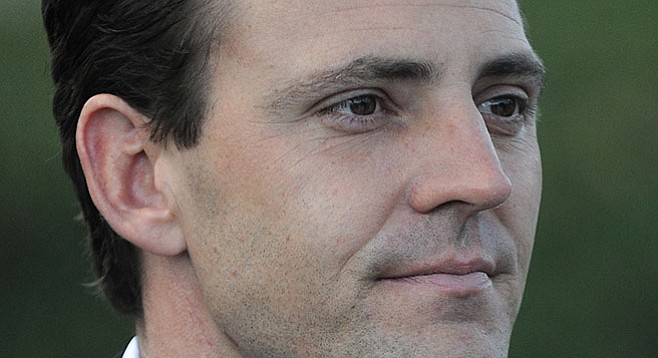 Fletcher, who recently wed Democratic assemblywoman Lorena Gonzalez, is currently said to be mulling a 2018 race for county supervisor to replace termed-out Republican Ron Roberts, a longtime player in Qualcomm Stadium controversies. The venue is in Roberts’s Fourth District.

In addition, one source said, Stone's group has been quietly pitching its proposal to the GOP's Kevin Faulconer, who bested Fletcher in the 2013 primary but has of late been getting hefty Jacobs family financial support. 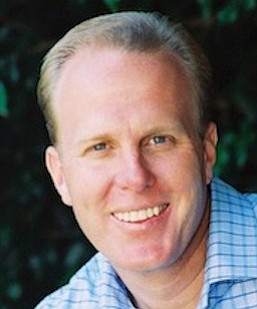 Last year, Faulconer collected a total of $6150 in campaign contributions from Qualcomm executives in the days leading up to and after a March 17 meeting with Irwin Jacobs regarding a Jacobs-favored road and parking-garage plan for Balboa Park subsequently backed by the mayor.

Another stealth target of the Stone lobbying campaign is said to have been San Diego State University.

"Emails obtained by The Associated Press through a California Public Records Act request show that SDSU has been in contact with Mike Stone and Altman at least since April 2015," the AP reported last June.

Paul Jacobs, Altman, and Stone are listed as investors by CourseKey, a 2014 start-up associated with SDSU, says its website.

According to information posted online by SDSU’s Fowler College of Business Administration two years ago, “Currently, the team is planning to ramp up to 6,000 users at the SDSU campus by the fall semester of 2015 and 10,000 by spring semester of 2016. They are also making plans to move beyond the SDSU campus with their novel approach to academic management systems and have already laid the ground work for their first round of financing in summer 2016.”

Not really a "stealth stadium deal". The MLS group has been talking with SDSU and this city about doing this if the Chargers left for over a year. It wasn't a secret SDSU was going to need a new stadium somehow once the Chargers left and Qualcomm Stadium became untenable for the city.

As for the signature gathering campaign, it won't be for a ballot measure if you re-read Acee's article. There's no time for that. It would be to present to the council and would allow the council to by pass the lengthy California environmental review and approve directly.

If SDSU has been meeting with these people for over a year, and this is all they get (the chance to play in a 20k-30k stadium, which is mentioned in other stories about this development but not mentioned in the story above), SDSU has been wasting all of their time. The stadium is too small for the Aztec's needs. It needs to be 40k minimum.

I don't see how it needs to be 40k minimum. 40k is a rare attendance number for SDSU. They will likely have more attendees now that the Chargers are gone, but even so I'm not sure I see how they "need" 40k seats unless they were already regularly drawing 40k+ to every game. Even if that were the case they could just charge a little more for tix at a 30k seat stadium.

"The fact is, SDSU has averaged more than 40,000 fans a game at home just three times over the school’s 47-year Division I history."

The MLS group would be paying for the stadium and paying the city for the land. Their total investment would likely be in the ballpark (pun intended) of $300 million, and SDSU's contribution to this proposed project would be zero money and apparently just asking the city council to vote yes.

SDSU can't expect to get exactly what its biggest football fans would want if SDSU is paying for neither the stadium nor the land. If SDSU was putting the $300 million on the table, that would be a different story.

Averaging 40k/game won't be a problem in a 30k seat stadium. It won't happen. They averaged about 37k/game this past season. Attendance should increase a bit with their second consecutive 11 win season, and the fact that the Chargers have slithered away to LA. The Aztecs have the chance to do it right the first time with stadium size. Some of the other G5 schools have also built stadiums in the 40-50k range recently (as have some P5 schools). 40k is on the low end of that range. Funding will be an issue, but it needs to be done right the first time.

It's also interesting that of the Aztecs top ten attendance averages, 5 were done when the Q only sat about 53k for football.

Maybe they can make a run at getting into the PAC-10/12/14/16/whatever it grows to. I've always thought that it would be silly for SDSU to make a move to any other conference. I think a case could be made that SDSU is ready for the PAC-12. The SDSU hoops program has clearly been at a higher level than hoops at most PAC-12 programs over the last several years. The football team has traditionally not been competitive with PAC-12 opponents, but now the football team is reaching a level where it might actually be able to have a respectable record in the PAC-12. With the general sports void left by the Chargers exit, and a top-25 football team this might be the time the Aztecs could make the move.

Unfortunately, expansion is up to university presidents along with the conference commissioners, and lately, TV networks. Expansion doesn't really seem likely. One way you don't make an impression is playing in a 30,000 seat stadium.

Yes, SDSU athletics has been improving in recent years. They beat Cal last year, and have two Pac12 teams on the schedule this upcoming season. And basketball has had a pretty good track record for a decade. But another thing to consider is--the Pac12 likes to recruit in San Diego (along with other P5 conferences), and it is to their advantage to keep SDSU out of the Pac12.

More back room deals....where is Moores...the Dougmeister? There needs to be way, way more public input before jumping on board any plan for the mission valley site. There are many options, no shortage of developers....tons. Someone bright once said all local politics is criminal. Think?

I hope no one believes that this scam has anything to do with improving fans experience attending games. It's stealing parkland for sleazy development, and ripping off the taxpayers for a stadium inferior to the one we have.