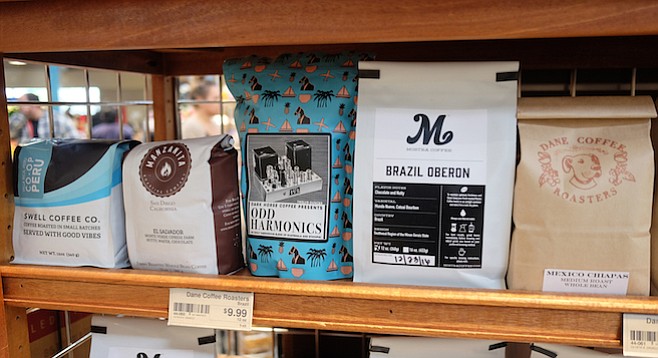 With the opening of its seventh store in North Park last month, regional grocery chain Barons Market introduced a new concept it calls the Local Coffee Corner. A dedicated display at the end of the chips aisle features a small selection of beans from five county roasters.

Vice president of marketing Rachel Shemirani says Barons was approached by each of the local brands in the months leading up to the new store’s opening. “Bringing local coffee is a brand new thing for us,” she says, noting the coffee previously sold at Barons have been widely distributed brands such as Illy Coffee, based in Italy.

Each of the local roasters presented coffee at Barons’ weekly food-panel meeting, where products are evaluated for taste, ingredients, packaging, price, and the question, “Would you buy it again?” Shemirani notes, “Of the 80 to 100 items we try every week, about 5 or 6 make it through.” All five roasters presented such “shelf-ready” products that members of the Barons team were divided across the board.

Consequently, all five made the cut: Manzanita Roasting out of Rancho Bernardo, Mostra Coffee from Carmel Mountain, Golden Hill’s Dark Horse Coffee, Point Loma’s Swell Coffee, and North Park’s own Dane Coffee Roasters. Shemirani adds that, should the coffee corner perform well in North Park, Barons will replicate the model throughout its other stores.

Further north, 3 Local Brothers — the hospitality group behind the Urge gastropubs and Mason Ale Works brewery — has also taken a first step into specialty coffee with the launch of its Mason Coffee Works coffee bar.

The counter is housed inside its Brothers Provisions gourmet foods and bottle shop, which recently doubled in size thanks to an expansion that also added a full kitchen, wood-fired pizza oven, sustainable meat and seafood selections, and takeaway fare.

Co-owner Zachary Higson says the coffee component has been planned for years but fell to the wayside as he and his partners focused on opening restaurants, breweries, and a planned bowling alley. While the new brand may expand into production, Higson maintains, “Right now we’re just showcasing quality coffee. We’re using Bird Rock as our featured roaster [including a custom blend], and we’re focused on making Mason Coffee a quality experience.”

In addition to Modern Times’ coffee, the festival will feature out-of-town roasters, including Chicago’s Dark Matter and Charlotte’s Pure Intentions, pouring coffee drinks including cold brew and barrel-aged concoctions. Modern Times chief executive Jacob McKean notes, “We picked roasters who share our approach to coffee: nondogmatic, experimental, and focused on pushing specialty coffee forward. We also went for roasters who have done some of the most interesting and boundary-pushing collaborations with breweries.”