A small batch experiment every week from Mikkeller SD 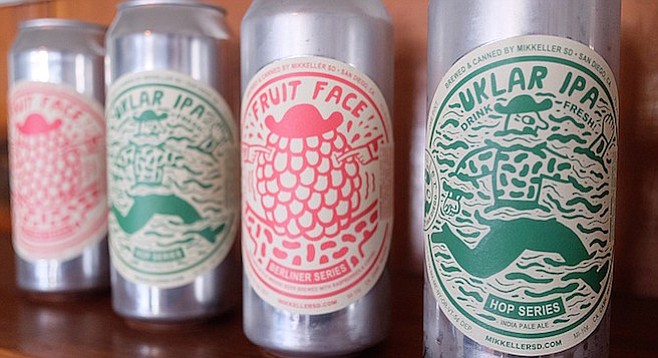 Speaking to a sales rep from Mikkeller Brewing in 2014, one stat line he was quick to point out was that brewer Mikkel Borg Bjergsø had produced 600 beers in eight years since founding the company. The gypsy brewer's reputation was built, in part, by a penchant for devising experimental and unusual beer recipes, which have included singular ideas like Kihoskh, a brett session IPA aged in cherry wine barrels; Jungle Shout, a stout brewed with licorice and the Japanese citrus fruit yuzu; and Mexas Ranger, described as "ale brewed with spices, almond milk, cocoa, chili, black beans & avocado leaves."

So when Europe's best known craft brewer chose to open his first static brewery in San Diego last year, knowing beer enthusiasts reveled at the opportunity to indulge in a few of the more creative and unusual beers associated with his brand. While the brewery was certainly busy in 2016, producing dozens of beers, the styles were relatively pedestrian: IPAs and pales, Belgians, and many variations of the brand's flagship Beer Geek coffee stout.

However, it's a new year, and things are about to get interesting. At the beginning of January, Mikkeller San Diego announced it will release at least one new small-batch craft beer every week in 2017.

“With more frequent, small brews we’re able to play with ingredients and invent a large variety of beers," explained Bjergsø in the announcement, "We can’t wait for craft beer drinkers to try some of the beer styles we have never made available in the United States before.”

The ambitious release schedule kicked off on January 12th with a release of the first three small batch beers that prompted lines outside Mikkeller's tasting room. While a bottle of bourbon barrel aged stout from the Beer Geek series doesn't resonate as unusual or surprising, the pair of 16-ounce canned releases do.

Uklar IPA boasts a whopping seven pounds of hops per barrel, far too expensive a beer for a brewery to produce with any quanitity or frequency. The 7% ABV beer is bracingly bitter, with more aroma than a whole can of Febreeze. Meanwhile, the Fruit Face Berliner weisse tart features the unlikely combination of raspberry and rye barrel aged Ethiopian coffee.

Head brewer Bill Batten attributes that idea to fellow brewer Dan Cady, indicative of the collaborative brewing relationship involved in this beer-every-week undertaking. Batten notes Bjergsø and team have already planned out six months' worth of playful weekly releases on top of their regular brewing calendar.

For Bjergsø this is business as usual. He insists that, for brewers, "It's hard not to experiment. It's fun. It's more fun than making the same beer over again." He says longtime Mikkeller artist Keith Shore feels the same way about being tasked to create new label designs each week.

More ambitious as Bjergsø sees it is the plan to overnight a pallet of the small batch cans every week back to Copenhagen, for simultaneous release. Otherwise, the only places outside San Diego to receive these unique beers will be Mikkeller bars in San Francisco, Oakland and Los Angeles.

Now is the time San Diego beer fans reap the greatest benefit of having Mikkeller in town. Cans and bottles will be sold exclusively out of the brewery's Miramar tasting room, while some of the weekly beers may show up at select local tap rooms.