County board members vote themselves a $19,000 raise 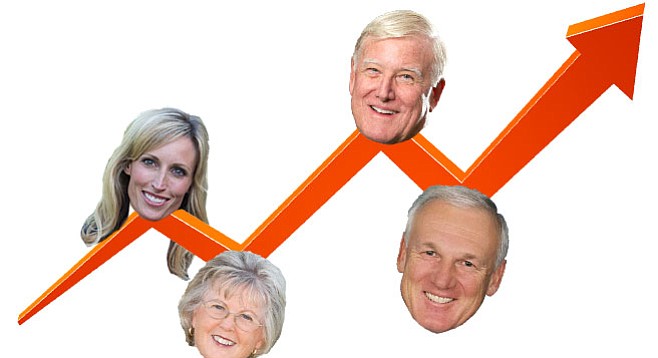 Besieged by editorialists and irate citizens, the county board of supervisors maintained their resolve last week, approving a 12.5 percent boost in their own pay in a 4-1 vote, with newly elected Kristin Gaspar the sole dissident, who will get the hike nonetheless. Board members’ pay will go up more than $19,000 a year, with a sizable pension boost also part of the deal. Per their 2016 personal financial disclosure filings, required by state law, the four “Yes” votes are already a prosperous lot, boasting a bevy of stocks, real estate, and business interests.

Another market maven on the county board is Greg Cox, disclosing $10,000 to $100,000 holdings in Medtronics, Fedex, EMC, Home Depot, Qualcomm, Seacoast Commerce Bank, American Electric Power Co., Manitowoc, Clearfield, Clearone, Repligen, Anika Therapeutics, Alliance Fiber Optics Products, and Gray Television. In Cox’s $100,000 to $1 million category were IRA accounts at Wedbush Securities for himself and wife Cheryl. One of her IRA holdings, SeaWorld Entertainment, worth between $2000 and $10,000, got her husband a $3000 fine from the state’s Fair Political Practices Commission last April when it was discovered he’d made the motion and voted on a controversial expansion for the aquatic amusement park as a member of the state Coastal Commission. He claimed Cheryl didn’t tell him about the asset. “When I discovered the purchase, the stock was sold and the facts were reported. Both my wife and I deeply regret the oversight.” The $8679 investment was made three months before SeaWorld filed for its project.

Cox’s fellow supervisor Bill Horn listed as his primary holding six parcels of North County real estate, each worth more than $1 million. He was forced by the FPPC to recuse himself from voting last year on the massive Lilac Hills subdivision in Valley Center due to conflicts of interest posed by the property. Ron Roberts, the other member of the termed-out supervisorial foursome who voted for the pay raise, listed two stocks, Motorola and Qualcomm, each worth from $10,000 to $100,000. He also disclosed a partnership in the Brooklyn Girl Eatery of Mission Hills, valued in the same range. Two parcels Roberts owned on Eagle Street were each said to be worth between $100,000 to $1 million.

Smart political move for Kristin Gaspar. She looks good and still gets the money. Now if she was really opposed to the raise she would refuse to take it. Bet she won't.

So why does millionaire Diane Jacob need to accept a paltry $70 dinner from a lobbyist? That makes no sense. She should pick up her own tab.

This is all shamefull on their parts . ...