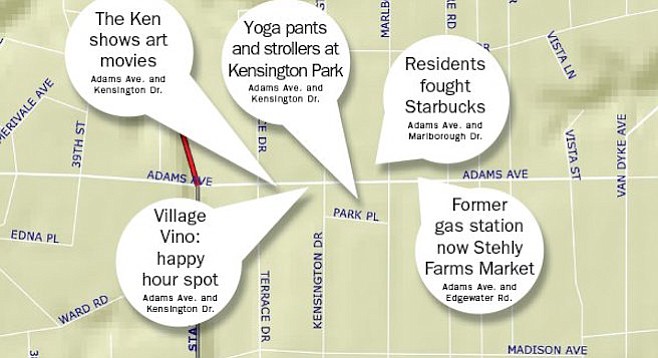 The January 12 article, “Kensington: The Only Real Neighborhood in San Diego” is an outstanding example — dynamic, well-researched, as well as effective writing style — of San Diego. It’s positive, and we’re grateful. 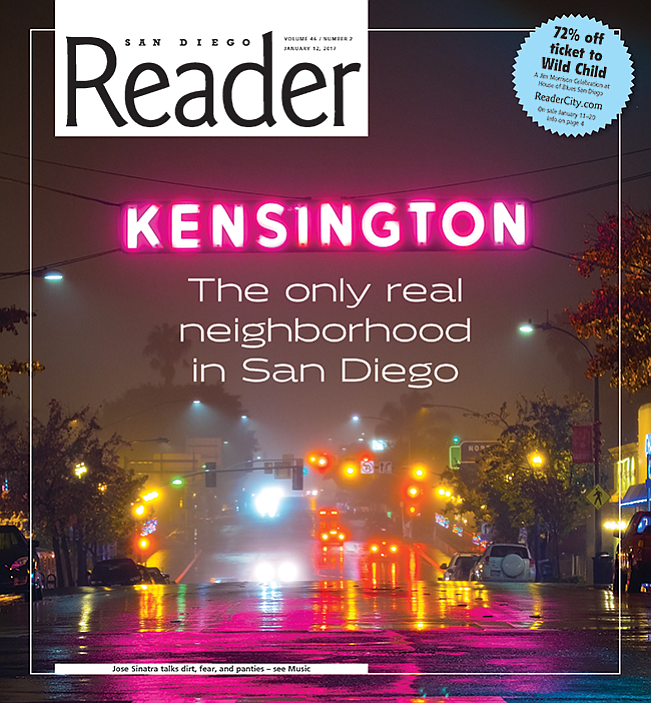 In Kensington, it's different

I never assumed a “real” neighborhood existed in the San Diego area (“Kensington: The Only Real Neighborhood in San Diego”).

Having lived here two years, I’ve been counting till I can return to my Chicago. Despite Chicago being a much bigger city, you find “Kensington” in most parts of it — something I’ve so terribly missed here. You needn’t be best buddies with the people on your block, but acknowledging one another by just saying hello is the rarest phenomenon in San Diego area.

The suburban layout is mostly to blame. When my three-year-olds and I went for evening strolls looking at decorations during the holidays in our subdivision, we felt as if we were trespassing.

I shall go back to Chicago, but I will say: Long live Kensington!

But It’s a Local Chain

Kensington resident Peter LaMontia shouldn’t be so smug (“Kensington: The Only Real Neighborhood in San Diego”); not wanting to patronize out-of-town “chain” establishments. He lists Burger Lounge as one of those restaurants he will not eat at. Yes, it is a chain, but apparently he is unaware of the fact that it is based in San Diego, therefore he ignorantly is not supporting a local business.

San Diego Is Not a Real City

I’m having difficulty following the logic in Ms. Fokos’s article, “Kensington: The Only Real San Diego Neighborhood." Many people would argue San Diego is not a real city and, therefore, could not be comprised of any real neighborhoods.

Though I am a San Diego native, I have seen just enough of this world to find some merit in this claim. Ms. Fokos might concern herself with San Diego’s overall standing and identity within the global or even national community before pronouncing pseudo-controversial banalities based on limited perspectives and false assumptions.

Lay Off the Snobbery

Regarding your article about Kensington, Miss Madden thinks that Vons and 7-Eleven are “scars upon the face of the neighborhood.” Mr. LaMonita proudly refuses to patronize Starbucks, Edward Jones, or Burger Lounge because they are “just big corporations.”

It must be incredible to live so purely that you guys never shop at Home Depot, Walmart, Macy’s, Whole Foods, Petco, Costco, Best Buy, Ralph’s, Trader Joe’s, etcetera. Where the heck do you buy your groceries — the corner liquor store?

I suppose the Rite-Aid on Adams Avenue is also a “scar” on the face of the neighborhood.

Having lived in Normal Heights for decades, I’m glad that Rite-Aid, Vons, 7-Eleven, and Subway, to name a few, are available, although I also patronize the independent stores.

Lay off the snobbery, people. Many of the corporate stores you hate are walkable businesses that our older citizens, young families, and single people utilize.

Side note: It’s so nice to see Barbarella back for even the occasional feature. Good article!

Call It What It Is

Why aren’t all these people being arrested? Aside from any additional crimes that may be involved here (battery? false advertising?), the essence of what’s going on is that women are performing sex acts for money, and men are soliciting and paying them to do so.

Isn’t prostitution illegal in California? The fact that it is being done on camera makes it more grotesque and disgusting, but it doesn’t change what it is.

I have not seen Barbarella’s column (Diary of a Diva) in a long time. That column is my strongest pull to the Reader. Going on the website, I see she has been authoring articles ... maybe instead of her column? I really would like to see the column, maybe in addition to her articles?

By the way, I loved her book. Is there another volume coming?

There are so many offensive statements in this article. I understand that the author was quoting interviewees, but they could've chosen to leave out the racial slurs and offensive comments. The house painted like a "taco stand" mentioned by another commenter was the mildest, "Irish twins" is super offensive and calling the area south of Adams "Baja Kensington" is straight-up racist. Kensington may be a cute little overpriced neighborhood, but if this representative of its residents, I'll take the the less pristine, more diverse neighboring Normal Heights any day.

Author here. As an "Irish twin" myself (I'm half-Irish, with a sister two years my junior), I can't understand why that would be offensive. "Baja Kensington," had more to do with the sense of Adams Ave. being a huge divide — the moniker, as I understood it, was more a geographical joke than a slur, seeing as San Diego is a border-town. Also, Baja California is awesome, have you been recently? The "taco stand" chalk vandalism tidbit was included because it is an illustration of how passive-aggressive and rude some people can be, even in supposedly nice neighborhoods, and the anecdote also revealed the more friendly attitude of the man who shared this story of what happened to him upon painting his house. On another note, I love Normal Heights, along with many other San Diego neighborhoods, I spend a lot of time there. So I can see why you'd take it! :)