Artifacts of the cult

The Reformation was heaven for haters. 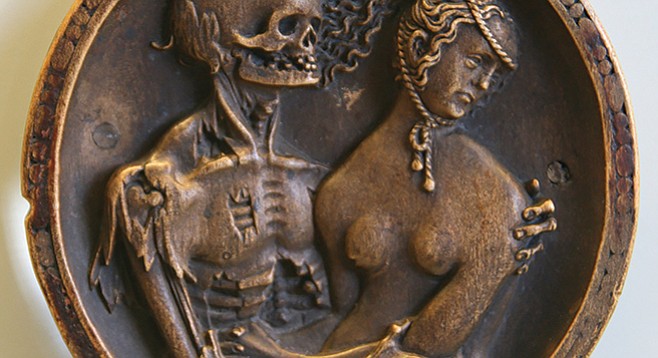 One of the first objects in Renaissance and Reformation: German Art in the Age of Dürer and Cranach, at the Los Angeles County Museum of Art, sets the stakes of a critical historical moment. Death and the Maiden (from 1520) is a small boxwood tondo carved by Hans Schwarz, the imagery a familiar motif from Dance of Death illustrations and stories from the late Middle Ages. A nude young woman is trying to slip the embrace of a skeleton dressed in the tattered rags of his flesh, which on his head look like a crudely sized skullcap. The woman turns her own head away so forcefully that her braided tresses thrash behind her, as if in revolt from the dire invitation and foul vapors the dead emit. It’s an image of how death insults sexual vitality and possibility.

That tension between Death and the woman is as wiry and volatile as the religious tension of the times. In 1517, an already controversial Martin Luther published his “Ninety-five Theses,” denouncing (among other things) the Catholic clergy’s practice of selling indulgences, which commuted time served by sinners in Purgatory. Business was booming. The proceeds funded the Papacy’s church-building projects and Vatican acquisitions. For Luther, the mediating machinery and go-between iconography of the Church corrupted the relationship between humans and deity. In place of gold and velvet pomp, Luther insisted on the individual nature of belief and the personal conversation between sinner and Lord. What God sees in us mattered most.

The iconoclasm Luther’s revolt initiated influenced artists’ range of subject matter. The individual portrait wasn’t commonplace in Germany until the late 15th Century — it was already thriving in Italy and the Netherlands — but after 1500, portraiture proliferated. As commissions of artworks on religious subjects declined, painters took on more commissions for paintings of rulers, Reformers, and men of professional and intellectual distinction. As the Reformation spread, northern art responded to the schism by pulling away from a Catholic pictorial vocabulary and concentrating instead on the humanistic singularity of personality so heroized in the Renaissance.

Of several portraits of secular types, two struck me keenly. The sparest, most Protestant work in the show is a small drawing by Hans Holbein the Elder of the sculptor Hans Schwarz, where Holbein’s economy of means — he made the sketch in silverpoint — expresses an artist’s aspiration and openness to experience. Schwarz’s face has a child’s ingenuous, lit-up awareness and curiosity. The other is a double portrait by Holbein the Younger, from 1528, of a British notary and his adult son: they’re looking off to the side, paying attention, it seems, to an unseen speaker. Their complexions are weathered; you see the northern climate rubbed into their faces. The robustness of their presence asserts the importance of the individual as agent of his soul in the world. These images, along with Dürer’s subdued picture of a young merchant that shows off the subtle rotundity of softly modeled shades and lights that Dürer had partly learned during two trips to Italy, pull us into the intimacy of character. You feel that these artists are confronting, unmediated by liturgical ceremony and the material accoutrements of Catholic piety, human personality and personal piety. It’s a very early accounting for what would much later be called personhood. The new realism, as extreme in its time as Luther’s rebellion, was evident also in renderings of religious figures. Lucas Cranach’s Christ, in His “Man of Sorrows” aspect, wears a plaintive, lost look, his physical suffering dramatized as supreme fatigue.

Opulent displays of Catholic faith were replaced in Reformation royal courts by non-iconographic extravagance. The cult of knighthood was one expression of the new secularism, and many artifacts of the cult are included in Renaissance and Reformation, such as suits of armor, which were made mostly for display, to satisfy the court’s desire for martial beauty, and for use in the occasional jousting contest. Armored mounted warriors were, in military terms, virtually obsolete. Two years before Luther’s Theses, the battle of Agincourt had proved the superiority of infantry to cavalry; archery in particular (as in the great “rain of arrows” scene in Olivier’s Henry V) could humiliate and subdue ground forces from afar, and foot soldiers could drag or knock from a horse a knight’s elegantly crafted but hopelessly immobilizing carapace. Any four-year-old with a fascination with knighthood will spend considerable time worshipping the armor on display here, even if in its time it was already a costume obituary for a vanishing culture.

There are daggers and rapiers, too, crusty with gemstones, and bulky gilded wheel-lock pistols, crossbows, and cartridge boxes. One decorative saddle dazzles. Spread upon the hammered gold pommel are soldiers and knights fighting before cityscapes and landscapes, at its center a lion’s head with a mechanism that moved the beast’s eyes and tongue. The domestic order had its own tokens of secular wealth and power — flatware, jewelry, goblets fashioned from nautilus and turban-snail shells. It’s hard to imagine the actual use of three large spoons with crystal bowls and handles forged from precious metals, but it was their finely crafted extravagance that mattered.

Reformation iconoclasm took time to play out. Artists still made pictures and devotional objects on traditional Christian themes. Lucas Cranach the Elder’s Christ on the Mount of Olives is an allegory of attentiveness. A kneeling Christ at prayer envisions a pudgy angel breaking through clouds bearing a cross as if it were a gift, while crouched in the lower corner, Peter, James, and John, asleep or nodding off, are oblivious to the praying Christ, positioned between his inattentive followers and the soldiers surging toward Him through cut rock. Albrecht Dürer’s airy, flashing sketch of the actual arrest is a flurry of not entirely defined action, except for the terrible street-violence immediacy of soldiers grabbing the Redeemer’s hair and pulling at His clothing.

From 1500 onward, Adam and Eve became an ever more popular motif. Original sin was tangled up with Eros. Ludwig Krug connects the First Ones, concupiscence, and the natural order in a kind of circuit of sin. Eve, holding the bough of the Tree of the Knowledge of Good and Evil, rests her hand on Adam’s shoulder while he holds in one hand the bitten apple (the other, hidden hand is holding or covering his groin); at his feet sits a monkey, or animal sexuality, taking a bite from his very own apple. The moral load of guilt and finality is as permanent as the moral heft of Schwarz’s Death and the Maiden. The most sexually ambiguous painting, which also plays with Eros and death, is Lucas Cranach the Elder’s nude, Lucretia, the classical heroine who, after being raped, stabbed herself to death, and whose perfectly rotund head and feline features look out with a defiant arrogance, as if we are somehow implicated in what she’s about to do. She wears only a necklace and transparent scarf: her shame and sleepy-eyed resolve express a vaguely flirtatious sexuality, right there as she presses a dagger’s point into her breastbone. 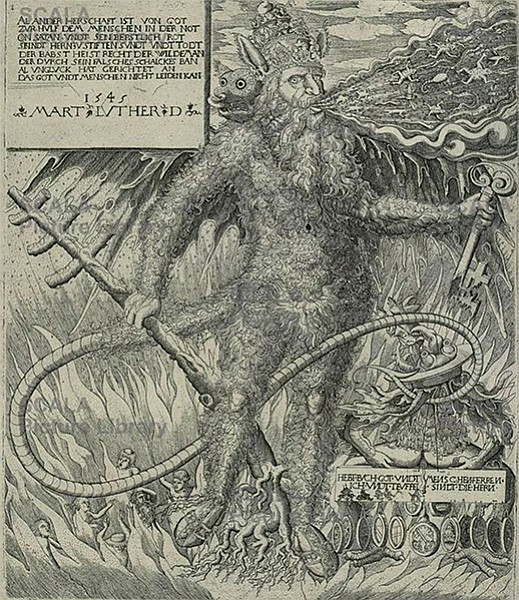 The Pope as a Wild Man

The Reformation was heaven for haters. Polemicists went wild. The invention of the printing press with movable type made it possible to inflame religious passions faster and more aggressively at a time when passions ran deep about Church wealth, the indulgences marketplace, dissolute clerics, and the Papacy as Satan’s instrument. For the illiterate, splashy, colorful broadsheets carried garish, shrill imagery. One schematic broadsheet by Melchio Lorch, The Pope as a Wild Man, makes the Pope into a grotesque version of the ancient pagan vegetative figure, the Green Man. Furry head to toe (and tail), accompanied by a defecating devil, the Pontiff wields Peter’s now-broken key while souls in the fires of purgatory writhe at his feet and donkey’s ears sprout from his tiara. Papal decrees are visualized as dark, filthy nonsense: from his mouth streams a delta of projectile vomit blasting forth toads, scorpions, dragonflies, and other unfriendlies. In Lucas Cranach the Elder’s book woodcuts, Passional of Christ and the Anti Christ, the antipathies are expressed with careful but pungent reserve: on facing pages we see an angry Christ driving abject money-changers from the temple; facing it, the Papal Anti-Christ sits above a table covered with coins and the written indulgences the coins are paying for. The Papal pup in the scene looks out at us with bemused disgust.

Renaissance and Reformation: German Art in the Age of Dürer and Cranach, on view until March 26 at the Los Angeles County Museum of Art; 5905 Wilshire Blvd, Los Angeles; lacma.org