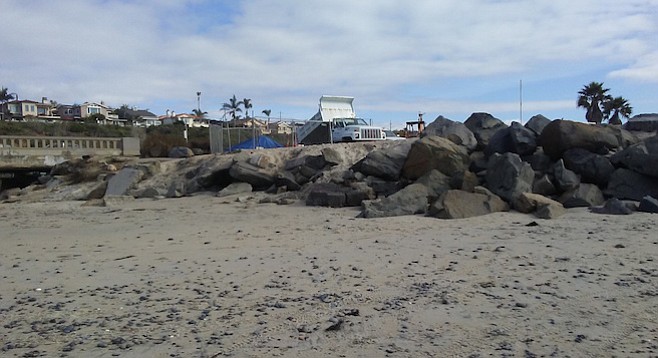 It's nearly an annual event — a big storm tears up the riprap that protects the turn-around for emergency vehicles in the Cardiff State Beach parking lot.

"It got eaten away again last year," said Darren Smith of the California Department of Parks and Recreation. "We're going to restack it." 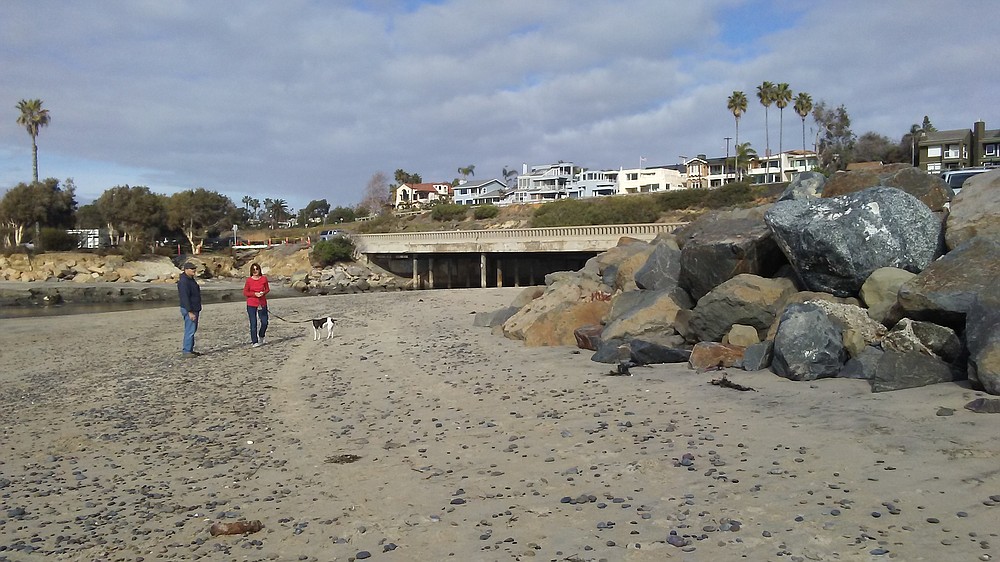 The pile of huge rocks has been in place on the beach yards from the south side of the channel where water comes into and out of the San Elijo Lagoon, depending on the tide. But the flat, sandy oceanfront area has been inundated many times by the ocean when high tide and high storm waves happen at the same time. (The entire stretch of the 101 gets pounded every so often during winters, on several occasions leaving it covered with rocks. The parking lot is at the north end of that stretch and Seaside State Beach at the south end.)

"We continue to try to protect the campground [north of the channel] and the turnaround," Smith said. This year, the inland face of the rip-rap semicircle took the biggest fall when an entire edge fell away.

Danny, who parks in the circle to do a surf check, didn't know it was broken but said he thinks the circle is "great. You can see two breaks from here because it's a little higher than the parking lot," he said. "Too bad there's nothing to see today."

If they let the turn-around slip away, the parks would have to eliminate half of the 60 or so parking spaces in the paid parking lot so emergency vehicles could still turn around, Smith said. He had a front-row view of how useful the turn-around is a few years back when he was surfing and another surfer had a heart attack.

"All kinds of emergency vehicles responded — we had a big fire truck and paramedics, and cops," he said. "The parking lot was full, but there was room in the turn-around — that's all red curb. And they wouldn't have been able to turn the fire truck around to leave without it."

Wave action pounds the riprap and clears out the sand beneath it, and the big rocks sag into the sand, he said.

"In 2013, a big storm took out part of the turnaround and we got an emergency permit from the [California] Coastal Commission to rebuild," he said. "In 2014, a big storm came and wiped out all our work." And then again last year.

The coastal commission generally frowns on armoring the shoreline and doesn't much like riprap. But state parks hasn't had difficulty getting permits to fix the big circle because it's part of public access and protects the existing parking spaces, Smith said.

"We are also reluctant to armor any shoreline, but this allows us to not take any parking spaces," he said. "This allows us to take the softest approach possible and still maintain the parking lot."

With the king tides today and tomorrow (January 10 and 11), the sea is very high and very low — more beach than you can see almost every day of the year. Great tidepooling and a rare chance to see big beach between Seaside and Cardiff. The 12th is the last day of king tides this year.